Gig of the Week: Young Fathers bring some sweet beats to Dublin 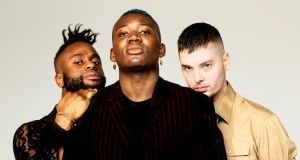 Young Fathers: they will stare you down, as if they’re staring down the barrel of a gun 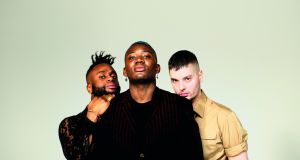 Young Fathers: they will stare you down, as if they’re staring down the barrel of a gun

With loud stares and still movements, Young Fathers work an unnerving energy into their live set to mirror the wide scope of social issues they tackle and unravel in their music. No strangers to Irish stages, they play the Academy in Dublin on March 28th. It’s part of the promotional trail for their third album Cocoa Sugar, an album which will probably feature on a lot of “best of 2018” lists.

Alloysious Massaquoi, Kayus Bankole and Graham ‘G’ Hastings push a protest into their live shows, which requires an audience that’s willing to be directed by the performance onstage. This dark presence works to a degree, depending on things like the mood in the room, which can be affected by incidental things like the day of week, the weather outside or whether or you had time to have dinner before the gig.

Their most recent Irish performance was a late night set at Electric Picnic’s Electric Arena last September, which saw them throwing their bodies into each millisecond, delivering a mesh of war cries and beats designed to get you moving. Performing Only God Knows from the Trainspotting 2 soundtrack, a film partly set in their hometown of Edinburgh, Young Fathers did not take their performance duties lightly. With lyrics like “Only God knows when the beast is eating/ Taking from our mouths when we ain’t eating/ Shedding more blood than we are bleeding,” they sent a chill down the spine that rivalled the chill in the Stradbally air that night, and their EP set turned into the kind of riot that leaves you all fired up and ready to change the world.

Since their Mercury Prize-winning debut album Dead was released in 2014, the Scottish trio have made it their mission to maintain a serious persona on record and onstage, lovely as they may be in person. Smiles are concealed, along with any other emotions bar fury, and they hold their position like a preacher in a pulpit, until their bodies break into skittish movements that hop from frantic to military. Using menacing drum beats, wiry synths and static piano chords to heighten the mood, their eyes gloss over and they fall into the music. “Get up and have a party,” they dare you on Get Up, a song that spits venom over the immoral roads that late nights can lead to. Clutching onto a warm beer in a plastic pint cup, you’re aware of the irony of it all and sing along anyway.

The fairground piano style used in Rain or Shine, taken from 2015’s White Men Are Black Men Too, is intentionally jarring. By using upbeat sounds to deliver songs that deal the conflicts within class, race and religion, Young Fathers want their audience to question the society that’s been formed around them. With such heavy content to drum out, no wonder they’ve no time to crack a smile.

Young Fathers’ music is a thundering clash of genres, with raps that sound like poetic diary entries, regretful soliloquies or repetitive statements of rebellion, and purposefully clunky electronica music. Three albums in and they have yet to veer off course from making music that matters. So when they make their way on to the Academy’s stage, they will stare you down, as if they’re staring down the barrel of a gun. The energy that Young Fathers sends out needs a receiver, so if the mood in the room is off, then the tension that they create will fall flat. But if the group and the audience are in sync – and everyone has had their dinner on time – it will be a fully-charged gig.

Michael Kiwanuka: ‘If you’re a creative, you don’t try and be that, you just are’
6

Writer’s block: how to be creative even in crisis
7

How much damage might your money be doing on Black Friday?
9