The singer (76), who has died at her Detroit home, made life-affirming soul music 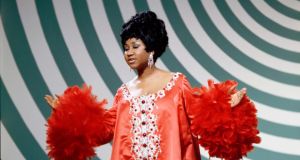 Aretha Franklin on The Andy Williams Show in 1969. Her influence can clearly be heard in successful contemporary acts such as Adele and Beyoncé. Photograph: Getty Images

Lovers of soul music and R&B across the world are mourning the death of the music’s greatest vocalist, Aretha Franklin.

The 76-year-old singer, who died at home in Detroit on Thursday surrounded by her family, had an extraordinary voice, deeply rooted in the gospel tradition, which simultaneously combined great power, remarkable delicacy and profound emotional depth.

In a string of hits during the turbulent late 1960s, she gave expression to the newly heightened consciousness of black America, and in particular of African-American women.

Many of the songs which made her famous then – Respect, I Say a Little Prayer, I Never Loved a Man the Way I Love You – sound as fresh today as they did 50 years ago, while her influence can clearly be heard in successful contemporary acts such as Adele and Beyoncé.

She revitalised her career in the 1980s and 1990s through a series of duets with younger stars like George Michael and Eurythmics, and ultimately had more than 100 singles in the Billboard charts, but she will always be remembered for those towering, transcendent, life-affirming hits of the late 1960s and early 1970s.

Born in Memphis and raised in Detroit, Franklin grew up performing gospel songs in her pastor father’s congregation.

In her early years as a professional singer, she had only modest success – until she escaped from her contract with Columbia Records to find musical liberation with Alabama’s famed Muscle Shoals Rhythm Section.

Together, they created a new kind of female pop music, more openly indebted to spirituals, blues and rock’n’roll and less inhibited than the crystal-clear Motown sound which had preceded her. In her hands, this music of sorrow and yearning was transformed into songs of optimism, empowerment and hope.

In her voice, we could feel our history, all of it and in every shade

While Franklin’s music transcended racial barriers, it spoke particularly profoundly to the African-American experience, and it was no surprise when she was invited to sing at the inauguration of the country’s first black president, Barack Obama, in 2009.

“In her voice, we could feel our history, all of it and in every shade – our power and our pain, our darkness and our light, our quest for redemption and our hard-won respect,” Mr Obama said in a statement yesterday.