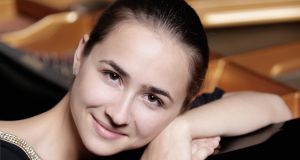 The New Music Dublin festival is not the only place for new music this weekend. Russian pianist Anna Tsybuleva, winner of the 2015 Leeds International Piano Competition, began a Music Network tour in Dublin on Thursday with a programme that included the first performance of Siobhán Cleary’s specially-commissioned An Cailleach. It shares the programme with a Chopin selection (the F sharp minor Polonaise, the Op 59 Mazurkas, the C minor and E flat Nocturnes, and the First Ballade) and Tchaikovsky’s The Seasons, commissioned for serial publication in a magazine with each of the 12 pieces corresponding to a different month of the year. Cleary’s new work, named after a Scottish legend of winter as an old hag, was written as a companion piece for the Tchaikovsky.

In an Evening’s Breath is the title for the latest Kaleidoscope concert at Dublin’s Bello Bar. Cassiopeia Winds play Carl Nielsen’s Wind Quintet of 1922. Catríona Ryan and Matthew Manning perform a duo for flute and oboe by Telemann. Elizabeth Hilliard sings Gráinne Mulvey’s Phonology Garden for voice and electronics. And the Tommy Halferty Ensemble end the evening with a change of gear for a Jazz Suite after Albert Camus.

The RTÉ National Symphony Orchestra’s latest programme offers a rare airing for Carl Nielsen’s Aladdin Suite. The seven movements were culled from the incidental music for an elaborate 1919 production of Adam Oehlenschläger’s play. The producer interfered so much with the music that the composer disassociated himself from the way his work had been treated in its theatrical setting. The suite has been called the Danish rival to Grieg’s Peer Gynt for atmosphere and tunefulness. The other works are by Ravel (the Piano Concerto) and Sibelius (the Fifth Symphony) and the evening’s soloist (Javier Perianes) and conductor (Jaime Martin), both from Spain, can be heard in a pre-concert conversation with Catríona Ryan at 6.30pm.