Spectrum Festival: a blasted missive from the musical frontiers 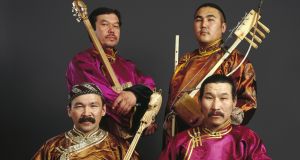 Referring to avant-garde composer John Cage, Brian Eno once joked that “we don’t all have to be polar explorers”. His point was that while it’s important that someone has gone to those extreme places and can report back about what they have found there, we don’t necessarily need to go there ourselves. But when we hear the stories of those who have, we learn something about ourselves and the world.

In musical terms, the Spectrum Festival, programmed by the Improvised Music Company and taking place across various Dublin venues from Friday March 9th to Sunday March 11th, is just such a report, a blasted missive from the frontiers of music and a chance for listeners who spend most of their time in temperate climes to dip a toe in more rarefied musical waters.

Subtitled “creative music for curious ears”, Spectrum converges on the space where jazz, contemporary classical, the avant garde and art rock collide. Though necessarily compact in size, it’s an important event in the city’s musical calendar. Following hot on the heels of the New Music Dublin festival, it’s an encouraging sign that, after many years in the wilderness, there is a nascent audience for challenging contemporary music in the capital.

This year’s Spectrum is true to its name, running from cutting-edge European jazz to ear-opening free improv to timeless avant-folk.

The boutique festival launches itself into the unknown on Friday night, downstairs at the Mezz in Temple Bar, with a heavy-hitting double bill featuring groups from the fertile London scene. Snowpoet, co-led by vocalist Lauren Kinsella and multi-instrumentalist Chris Hyson, is a six-piece electro-acoustic unit loaded with talent. Dublin-born Kinsella has built a formidable reputation for creativity on the UK scene, winning Jazz FM’s vocalist of the year in 2016 and now signed to prestigious indie label Edition. She and Hyson craft original music that blends spoken word, electronica, avant-folk and contemporary jazz, with a group of musicians who represent the front rank of emerging UK jazz talent, including saxophonist Josh Arcoleo and drummer Dave Hamblett.

Second up on Friday’s bill are the trailblazing, MOBO award-winning Sons of Kemet, whose hypnotic blend of jazz, dub and Afro-Caribbean grooves is lighting up the London club scene. Led from the front by rising star saxophonist Shabaka Hutchings, the band features two drummers, Tom Skinner and Eddie Hick, and basslines from tubaist Theon Cross.

Saturday’s concert at the Fumbally Stables presents a similarly contrasting brace of acts. Saxophonist Sam Comerford, another leading light of the Irish jazz diaspora, studied at Newpark before relocating to Brussels where he’s winning awards for his adventures in sound. Thunderblender is his bass-less trio with keyboardist Hendrik Lasure and drummer Jens Bouttery, which hovers between groove and abstraction, inspired by New York downtown players such as Tim Berne and Dave Douglas.

Also on Saturday – and also emanating, at least spiritually, from the downtown scene – is the free improv duo of west Cork saxophonist Catherine Sikora, who cut her teeth on the New York experimental scene, and drummer Brian Chase, best known as the rhythmic force behind Brooklyn indie rockers Yeah Yeah Yeahs.

The festival’s closer on Sunday night at the Grand Social veers into leftfield with a performance from celebrated Mongolian throat singers Huun-Huur-Tu. Tuvan throat singing, where single voices produce multiple pitches, is one of the more surprising breakouts of the global folk scene, and Huun-Huur-Tu’s haunting Shamanic sound has even found its way into the mainstream, featuring in the hit TV series Fargo.

Leave your prejudices behind, bring plenty of canned goods, and you’ll be grand.

Spectrum line-up: the bands, the dates and the venues

Snowpoet and Sons of Kemet