Taking over the Arts Council from her kitchen table, the new director faces an upended sector 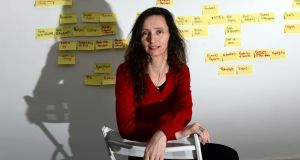 The weekend after Maureen Kennelly was announced as new director of the Arts Council on March 6th, Ireland shut down. By March 12th she and colleagues at Poetry Ireland, where she was director, were packing up “everything we could possibly need” to work from home. A colleague remarked: we may never work together again with you in this office. “I thought, oh God, no, we’ll be back in three weeks. But as it turns out, he was right. I didn’t know that would be the end of it.”

She ended up starting the new job early, working with council chairman Kevin Rafter and acting director Martin O’Sullivan, as the devastating outfall of the pandemic on the arts world became more apparent. It was a strange way to begin a significant role: no time to get her feet under the table. There was no honeymoon, not even an engagement.

But Kennelly has worked in the arts sector for over 25 years, and was familiar with many people and organisations, even if the biggest challenge, Covid-19, was completely new. “I’m absorbing a lot of new information and getting to know new colleagues in a way I’d never have guessed.” Over the first few days she tried to “meet” all 42 staff, on videocall or phone. They’ve been “brilliant, getting quickly organised to work from home. I’ve received a really warm welcome. It’s a very collegiate organisation, I think. The team is so good,” she says.

It’s especially difficult for art forms relying on live audiences. While people can do great work digitally, it’s rarely a replacement for the live experience

“On my normal first day I’d have had a lovely big tea break to say hello, and I’d have looked forward to that. Anyway, that will come in time.”

Instead Kennelly is at home at the kitchen table, surrounded by books, particularly poetry. Initially this was for Poetry Ireland’s poem of the day. “There are so many life affirming poems by the likes of Paula Meehan, Kerry Hardie, Ruth Stone an American poet. Derek Mahon, of course: he’s almost like the talismanic poet of Covid-19. He took off in an unexpected way, a few weeks back. Heaney, of course, has many poems to teach us wisdom in these times.”

Also beside her is Anne Enright’s Actress and poet Colette Bryce’s “gorgeous book” The M Pages, and Kennelly talks with sadness about “all those book launches that were to happen. It’s just such a precarious life, everything building towards a particular moment in your career, the launch of a book. To be upended like that, it’s really heartbreaking.”

It mirrors the situation for all arts workers, “building up to something, whether in an arts centre, gallery, theatre, cinema, concert hall or the open air. When that’s all upended with no certainty of a future date, it’s deeply unsettling and shocking. It’s especially difficult for art forms relying on live audiences. While people can do great work digitally, it’s rarely a replacement for the live experience. A lot of livelihoods depend on this, both creative and technical. And of course audiences too will be missing and craving this connection. That’s why we’ll be working as hard as we can to make the case to Government on behalf of artists and of the public.” Initially that’s involved creating an Arts Council advisory group to figure out what’s needed to ensure the survival of the Irish cultural sector.

Kennelly’s normal life involves lots of interaction. “In Poetry Ireland we had an open plan office; while that can sometimes be distracting and disruptive, ultimately I’m the sort of person who gets massive energy from the people around me. And working in the arts is so collaborative.” A new job in isolation must be hard. “It’s definitely a shock. But I can still work. There’s an awful lot I can still achieve. I know I am incredibly lucky to have a job. I’m acutely aware of so many people in the arts whose livelihoods are under severe threat and this makes me all the more determined to make effective efforts on their behalf.”

In isolation at home with her husband, Fergus Cronin, “like loads of other people I’m in more touch with friends and family than before. There’s a lovely kind of comfort in that.”

Her mother is almost 89, very independent and living “extremely well” with cancer. “She’s a trooper. She now has a smartphone and is having great fun with that.”

They also spend time chatting with “Fergus’s gang in Edinburgh”, including his grandsons, Lorcan (8) and Oran (4); Cronin has been doing Scots Gaelic lessons and playing chess on Facetime with Lorcan, as well as writing short stories. Kennelly videocalls her 15-month-old grandnephew Elliott in Cobh: “He’s enjoying the good weather and blissfully unaware of what’s going on”.

There are poetry readings on Zoom, and “very careful planning going on around food. Fergus is threatening to break out with a bit of baking soon.” More used to being out in the evenings, being at home “eating proper dinners and having a regular schedule is quite a new thing" for Kennelly.

Covid-19 was “such a sudden and brutal thing for arts organisations which are public-facing – venues, theatres, galleries – in particular. That sudden closedown is really shocking for us. The emotional thing first, then you’re thinking of the economic fallout. For artists who work collaboratively, it is a huge deal. In theatre, people have to be with others in the room or they just can’t work. The uncertainty as well, for venues, festivals, to know when it’s going to be safe. There’s scenario planning, budgeting for different cycles. It’s complex, and a very counterintuitive thing to have to do.”

Her first thought was for musicians due to play around St Patrick’s Day. “That is the bounteous time for musicians and their families. Their income is grounded on those big gigs.”

And “not wanting to be Pollyanna about it, but the arts sector has shown how relevant it is, more than ever before. So many people saying they’re turning to the arts, finding grace, comfort and consolation. From reading and music, that we can lay our hands on quite readily, to more complex things like galleries online and theatres’ recordings, like Druid’s fantastic Cherry Orchard. And we must never forget – lots of people have made their work available for free. That’s a challenge in the digital age, but in more extreme circumstances now, we have to question, how are artists going to be paid for this?”

She keeps anxiety at bay by “reading poems. I must sound like a party political broadcast for poetry! But there’s something just very grounding about reading a particularly good poem.” She finds solace in Heaney, Vona Groarke (“a very sure voice”), and she reads “a gorgeous snatch, very apt for the moment”, from American poet Jane Hirshfield’s The Weighing: “The world asks of us/ only the strength we have and we give it./ Then it asks more, and we give it.”

She’s limiting her news intake, and has discovered an old skipping rope that she's using to keep fit. “I hope to lay hold of my tin whistle, temporarily mislaid, so I can finally learn to play my favourite tune, Mo Ghile Mear. And I’ve found a reinvigorated interest from many, many years ago in setting spuds!”

Kennelly is aware “many have lost people, and people are sick belonging to them. I’m just feeling fortunate it hasn’t struck us, and thinking how brilliant people are, supportive and kind to each other.”