Maser: ‘Social media is getting samey-samey’

The street artist on his admiration for Helen Steele, Damien Dempsey and Greek islands 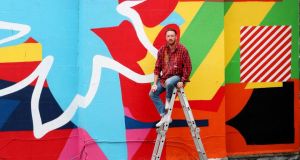 Maser (above) on his peers: “If I’m talking Dublin, I’m talking Aches. His street art has a graphic, contemporary feel.” Photograph: Marc O’Sullivan

Who is your current favourite designer?
Helen Steele, who’s in Monaghan, is my favourite textile designer at the moment. She pops up loads on my social media and her work is refreshing – they’re like paintings on textiles. We hope to collaborate soon on a piece.

Artist
If I’m talking Dublin, I’m talking Aches. His street art has a graphic, contemporary feel. He plays on the aspects that you’d learn in Photoshop, which messes with people’s perception. He’s a sound head too; we’ve painted together on and off for years. There are different attributes I pick up on when I meet certain people who I feel will be hugely successful. We’re all skilled and creative to a degree, but that has to be coupled with ambition and modesty, and he’s all of these.

Podcast
I’m not the biggest podcast person, but I listened to my good friends Andrea Horan and Una Mullally’s podcast Don’t Stop Repealin’. And to try and stop watching documentaries on the laptop before I go to sleep, I’m getting into the habit of listening to the occasional podcast. It has to be a crime or murder one, though. That West Cork one was gripping.

Album
I always revert back to traditional Irish music, and the album I’ve listened to most in the last six months is Damien Dempsey’s Soulsun. He released it last year, and I designed the artwork, but I’m not saying it for that reason. It’s very grounding and sets me straight. Seize the Day was the first of his albums that was really important to me; it got me through certain times in my late teens. It mentored me, and gave me guidance that I didn’t have from other peers. Vive La Damo!

Theatre show
I went to Michael Keegan-Dolan’s Swan Lake, or Loch na hEala, in the Abbey Theatre, and it blew my mind. I tried to get tickets again. You think you’re going to see a classic ballet but it was a contemporary play stripped back and unapologetic. The production was incredible – they were creative with their set and worked on the principle that less is more.

Film
I watch loads of movies in my downtime. Recently went to see Phantom Thread. It’s about a fashion designer in the 1950s. The visuals, story and pace were perfect. The friends I talked to didn’t like it but they’re wrong! I think it has a lot to do with your mood on the day, and it just captured me at that time. I heard that it was Daniel Day-Lewis’s last performance as an actor, but we’ll see.

TV show
I don’t really sit down and watch telly; I doubt many people do these days. If I do I’ll be just watching something random in the corner of my eye while doing something else. Mainly I watch documentaries online. I’ve watched all the art ones and I’ve exhausted the crime documentaries now – even Forensic Files, which has about 500 episodes.

City
I mainly travel for work, which gives me a different view. Some places I’m just in and out. It’s different when I travel for holidays as I get to experience it more. Last year I went to Singapore for three days, and they were three of the best days I’ve had in a long time. I was full tourist, with map in hand and backpack. I visited all the museums and city attractions. It’s a brilliantly interesting city. Usually I prefer to get out of cities, so if I can recommend anywhere to anyone it has to be Greece. Get to the islands; if I could I’d be there every year.

Restaurant
My favourite restaurant in Dublin is Coppinger Row. Friends of mine own it, other friends work in it, and other friends love eating there too, so it’s a win! My day-to-day go-to is the Japanese karaoke bar Ukiyo in Dublin. I pop by for a bit and occasionally work on the laptop there. I’ve had plenty of good nights in there too, with heads like Billy Scurry playing. Outside of Dublin, Supperclub in Amsterdam is a fun experience if you’re visiting. It’s a performance-related five-course meal, and there’s all sorts going on in there.

Social media account
Social media is getting samey-samey, but I’ll stop and look if I see anything by Nitch (@__nitch) on Instagram. They put up quotes from famous musicians, actors, architects and artists. It’s always an interesting read. I follow a lot of interior design accounts on Instagram; I hardly use Facebook or Twitter.

For more on Maser, see maserart.com