Swan Lake review: humour in the darkness, beauty among the ruin 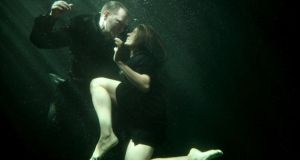 “If I say this is a house, it’s a house,” says Mikel Murfi, gesturing to two concrete blocks that fall with shocking weight upon the stage, making a noise that cracks like gunfire. Murfi plays the role of Seanchai in this new production by director and choreographer Michael Keegan Dolan.

If he says it is a version of the story-ballet Swan Lake, so it is, but there is little classical romance in the choreography and even less in the dark fairy tale the company create on stage.

Loch na hEala is not a reflective pool but a midlands mire, a giant black plastic sheet that is summoned before us by four dancers with tattered wings. In this bleak and practical landscape, Murfi, moving between characters (the priest, the politician, the policeman; all hilariously called O’Loughlin) introduces us to a scattershot narrative that involves incest, corruption, violence, depression, property – all the favourite Irish themes – but their iteration here is entirely original. Crucially, there is a lot of humour to leaven the darkness, and a lot of beauty to counter the ruin.

Keegan Dolan’s generous choreography grabs gestures from both a traditional and a modern register. The traditional elements are primitive, ritualistic, a contrast between low earthbound squats and a skyward reach.

There is so much going on on stage that it can be difficult to know where to direct your gaze, but, as the story strands develop, the lack of focus becomes less important than the concrete moments that the audience can take hold of: Slow Moving Cloud’s grounding Gothic score, which extends the Celtic flavour with Nordic inspiration; Hyemi Shin’s artfully simple costumes; the fluidity of Rachel Poirier and Alexander Leonhartsberger’s pas-de-deux; the joyous crescendo of the astonishing finale.

Swan Lake/Lough na hEala is raw, raucous, redemptive, majestic, vital and empowering. It is not always coherent but even then it is an extraordinary, beautiful mess.