Make a culture date with Dublin 8 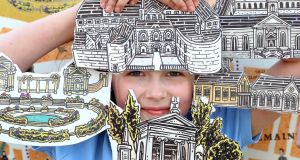 Two, four, six, eight, who do we appreciate? Actually, it’s all about the last number next weekend. Eight. As in Dublin 8. D8. Or DO8 as it seems doomed to become in the Postcode Future.

Now in its third year, Culture Date with Dublin 8 is a homegrown festival that takes place across a wide spread of the city over the weekend of May 18th-19th when a number of prominent cultural, historical and architectural icons are opening their doors for free tours, workshops, exhibitions and talks.

In the great game of Postal District Top Trumps, Dublin 8 has a bunch of aces up its sleeve.

In part that’s because it includes the Phoenix Park, the largest enclosed public park in Europe, within which you’ll find the largest obelisk in Europe (the Wellington Testimonial), the oldest cricket club in Ireland, the third oldest zoo in the world and our President’s private abode (Áras an Uachtaráin).

But Dublin 8 can stand proud even without that splendid 1,750 acres of landscaped parkland.

It also has Goldenbridge, Ireland’s first non-denominational cemetery, as well as Dublin’s oldest graveyard at Bully’s Acre, beside IMMA (Irish Museum of Modern Art), and one of the largest Viking burial complexes in western Europe at Kilmainham-Islandbridge.

Architectural enthusiasts will note that the Guinness Storehouse was the first multi-storey steel-framed building constructed in Ireland, while art lovers have IMMA, as well as the National College of Art and Design (NCAD), Ireland’s oldest art institution, on Thomas Street.

As may have been inferred from the above, Dublin 8 spans the Liffey and so bucks the mythical mantra that even numbered postal districts are southside and odd ones are north.

This curious glitch harks back to 1892 when a spanking new post and sorting office opened on James’s Street on the southside. The Viceroy, ensconced at the Vice-Regal Lodge (now Áras) in Phoenix Park, immediately became the new office’s most prestigious client.

Dublin 8 was born quarter of a century later when the Post Office introduced new postal districts to make life easier for the sorters and postal workers. With the city still smouldering after the Easter Rising, nobody was about to disrupt the Viceroy’s postal service so it was agreed that Phoenix Park and Islandbridge would be included within Dublin 8. In 1923, the new Free State government not only painted all the post boxes green but also formally adopted the district codes.

The history of the area is impressive. The first glimpse of humanity is a fish-trap plucked out by archaeologists a few years ago; somebody popped it into the Liffey by Victoria Quay about 2,200 years ago.

Early Christians are hinted at from St John’s Well near IMMA but it’s inevitably the Vikings who made the first significant mark. As revealed in great detail at the Dublinia museum beside Christ Church, the remains of dozens of warriors have been excavated at a major ninth century Norse Viking base (or longphort) at Islandbridge, complete with swords, spears, shields and other artefacts.

September 2019 will mark the 1,100th anniversary of the Battle of Áth Cliath, fought at Islandbridge, in which the Dublin-based Vikings annihilated an Irish coalition, slaying the High King and five other kings in the process.

On the plus side, the Vikings gave us Christ Church Cathedral, to which people are invited next weekend to ring the tower bells, explore the crypt or marvel at its glorious medieval-inspired floor, made up of 84,000 tiles in 64 designs from griffins and lions to black and white chevrons and fleur-de-lis.

Bell devotees are also bidden to St Patrick’s Cathedral, a legacy of the Norman age, where, as well as a tour of the bell tower, they can behold the incredible tomb of Richard Boyle, 1st Earl of Cork, an Englishman who allegedly arrived in Ireland with sixpence in his pocket and fetched up as the richest man in the land. Also here is the grave of the cathedral’s most famous Dean, Jonathan Swift, of “Gulliver’s Travels” fame.

Much of present day Dublin 8 was an extensive sheep farm

It was Swift’s handsome nemesis, Narcissus Marsh, Archbishop of Dublin, who founded Marsh’s Library beside St Patrick’s. As part of Culture Date, this fabulously atmospheric library is inviting children to participate in a free Lego Treasure Hunt to track down mini-figures of historical writers, while inhaling the wistful aroma of 25,000 rare books, the youngest of which was printed in 1745.

From the Normans until the Tudor Age, much of present day Dublin 8 was an extensive sheep farm. In 1662, the Great Duke of Ormonde stuck a wall around a large chunk of it, filled it with deer and pheasants and rechristened it Phoenix Park. The land between Phoenix Park and Kilmainham had previously belonged to the Knights Hospitaller. In 1680, the Great Duke established a retreat for war veterans on the site of the knight’s priory at Kilmainham.

Known as the Royal Hospital, this evolved into the IMMA, where next weekend’s visitors can avail of free tickets to catch the final weekend of Gaze, an exhibition dedicated to the eminent 20th century artist Lucian Freud.

The religious upheavals of the 17th and 18th centuries ignited a boom in the Liberties and the Coombe where the manufacture of silk and wool drew thousands of weavers of Irish, English, Dutch and French Huguenot origin. Many of the latter also excelled as jewellers, silversmiths and bankers.

Modernity gradually inched its way into Dublin 8 with the coming of canals, railways and trams, as well as distilleries, breweries, factories and engineering works at places such as St James’s Gate and Inchicore.

Next weekend, visitors are welcome to Richmond Barracks in Inchicore for tours, as well as a workshop in local biodiversity. Established for the British Army in 1810, the barracks came to prominence during the Easter Rising when more than 3,000 suspected rebels were held here. Among them were six of the seven signatories of the Proclamation of the Republic; all seven were subsequently executed at Kilmainham Gaol, which will also be providing free tours over the weekend, as well as presenting new, and previously unseen Civil War artefacts.

Today, Dublin 8’s streets, alleys and quaysides are replete with hipster cafes, cocktail bars and family-friendly restaurants. Among other highlights next weekend’s wanderers might consider are an outdoor concert in the temple at Goldenbridge Cemetery (founded by Daniel O’Connell in 1829), story-telling and theatrical re-enactments on the first World War at the Irish National War Memorial Gardens and various walking tours laid on for historical and photographic enthusiasts.

Culture Date with Dublin 8 will run on May 18th and 19th, events free but booking required. culturedatewithdublin8.ie

9 Welcome to the child sex capital of Europe