Prodigy singer had cocaine, codeine and alcohol in his system when found at his home in March

Dance music played out for the hundreds of fans who flocked to the town of Braintree, England for the funeral of Keith Flint, former frontman of the Prodigy. Video: Reuters 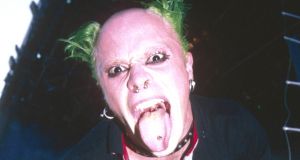 The Prodigy star Keith Flint died by hanging and had cocaine, alcohol and codeine in his system at the time, an inquest has heard.

The 49-year-old was found dead at his home, in Essex in England, on March 4th. The coroner’s officer Linda Calder told Wednesday’s brief inquest hearing: “Mr Flint was found at his home address by a friend, hanging from a beam.” The postmortem noted the presence of cocaine, alcohol and codeine in his body but did not specify the amounts.

The county’s senior coroner, Caroline Beasley-Murray, recorded an open conclusion, adding that “we will never quite know what was going on in his mind on that date”. She said Flint’s family and band manager were aware of the hearing but did not wish to attend. The hearing was held in their absence, with no witnesses called to give evidence in person.

Police found no suspicious circumstances and no third-party involvement during their investigation, Beasley-Murray said. Explaining how she reached her conclusion, she said: “I’ve considered suicide. To record that, I would have to have found that, on the balance of probabilities, Mr Flint formed the idea and took a deliberate action knowing it would result in his death. Having regard to all the circumstances, I don’t find that there’s enough evidence for that.” She also found insufficient evidence to conclude his death was an accident, where he may have been “larking around and it all went horribly wrong”.

Music fans travelled from as far afield as Australia to gather outside St Mary’s Church in Bocking, near Flint’s home in the hamlet of North End, for the singer’s funeral, on March 29th, with festival flags flying and floral tributes piled up in the churchyard, including one of the band’s ant logo. Flint rose to fame in the 1990s in the Brit Award-winning electronic band, who were known for hits including Firestarter and Breathe. Last November they released their latest album, No Tourists, their seventh consecutive number-one record.

Flint was described by his bandmates Liam Howlett and Maxim as “a true pioneer, innovator and legend”. They said he was their “brother and best friend” and “he will be forever missed”. – PA

‘Having a daughter stunted my creativity’: How male musicians navigate parenthood