After death of his infant daughter, Jason Greene’s memoir on grief is brutally honest 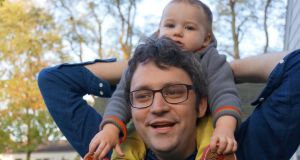 Greene exposes the reader to most people’s worst fear – the death of a child – in a manner that is sufficiently analytical to be intellectually beneficial, but honest enough to flay you raw

When my mother was dying of cancer, I would be regularly accosted by an unbidden blade of rage corkscrewing its way through my gut and find myself looking for private places to shout. Usually, I would retreat to the nearest bathroom. Sometimes, the sounds that tore its way out was one long, animal vowel, hungrily swallowed by the silence around me. At others, it was the sort of language that I had never before uttered, an undulating staccato of vulgarities that described the new ugliness of the world as I saw it.

The experience of grief is inherently schismatic; energising, tedious, beautiful and horrifying. In his first book, Once More We saw Stars, New York writer Jayson Greene admirably captures the beauty and, sometimes, the ego of grief. It is as unrelenting, as furious as grief itself, its opening salvo an excerpt from Dante’s Inferno from which the book takes its title, and is a warning of what is to come: Greene will guide us through his own experience of hell – the death of his two year old daughter Greta after a brick fell from an eighth floor window sill and hit her where she sat with her grandmother on a bench in the street below. Greene takes the reader through this inconceivable event and his overwhelming grief after it, out the other side and back into a world that has changed completely; a world without his child in it.

The book’s pacing mirrors grief itself, while Greene talks about its stages, he invokes them only as nonlinear descriptors of the most powerful emotional totems of loss. It jerks and shudders in a way that hurls the reader from rage to self-pity to hope and back again, and makes for breathless but rewarding reading. Greene authentically exposes the reader to most people’s worst fear – the death of a child – in a manner that is sufficiently analytical to be intellectually beneficial, but honest enough to flay you raw. Writing about death and grief almost always has to be done by indirection, laterally gestured at through metaphor because descriptive phrasing is just too exhausted to hit the mark. Occasionally Greene’s attempts to capture and display complexities reveal the mechanism working underneath and jostle like a drive on a hard road. At others, they serve their purpose completely.

What are the odds I might find a corner of the city to howl like a man being stabbed without being heard by a single one of them?

Where the book is very adept is in its temporal juxtaposition of the metaphysical and physical navigation of grief. Greta’s death is an implosion that changes everything around her; the structure and relationships within her wider family, the lives of her parents . The two sell their home because “Greta was everywhere in it, padding agreeably round every corner”. As Greene and his wife Stacy attempt to cope with a loss so terrible that their new status is nameless – “But what do you call parents who lose children? …there is no word in our language for our situation. It is unspeakable, and by extension, we are not supposed to exist”– he examines his own “suicidal despair” at a remove, turning it over and looking at its various faces in a way that is reassuring, because it is always paired with a drive to manage the grief and fundamentally, to live within his new reality.

Far from gratuitous misery for its own sake, Greene’s first book draws universal understanding from particular circumstances. He grounds his memoir in the many small absurdities of living with grief that keep his writing nimble; insensitive social workers, the relief of exercise, talking intimately with utter strangers in a support group, still having to answer his emails. Greene’s grief is a response to the worst kind of loss, but he does not “pull rank”. Anyone who has lost someone can find themselves in here. I was struck when Greene wrote that he became adept at finding places to scream in an overpopulated city where privacy is largely notional outside one’s own home. ( “There are eight million people in this city - what are the odds I might find a corner of it to howl like a man being stabbed without being heard by a single one of them?”) In his most accomplished moments, Greene peels the skin right back on painfully intimate truths, and lets the air at something visceral in a way that many writers on death fail to do. The result is a grief memoir of rare and perhaps even unflattering honesty that gives meaningful context to living with loss and surviving something that seems impossible until it happens.