Luke O’Neill: ‘We will be back in beer gardens with friends in June’

‘If nobody left their house for three weeks, the virus would go away but that’s impossible’ 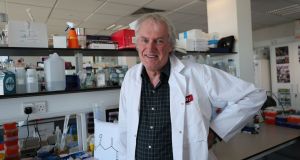 Luke O’Neill, professor of biochemistry at Trinity College Dublin, has called for antigen testing to be used in schools and workplaces to track Covid-19 infections. “We’re doing it for the hauliers going to Europe now so why can’t we introduce it into schools and workplaces. It’s a really powerful weapon for us to isolate people,” he said.

He was talking to Irish Times columnist Jennifer O’Connell on the fourth night of the Irish Times Winter Nights online festival, which ends on Friday, January 29th. O’Neill admitted that these cheaper, faster Covid-19 tests were not completely reliable but he believed the Government could advise us on which antigen tests were the most reliable.

O’Neill said that the science supports a zero-Covid strategy but it’s very hard to achieve. “Quarantining people in hotels in Dublin Airport won’t be enough if the Border is open. If Belfast and Dublin were aligned it would be easier but really, we’d need an EU-aligned travel policy as well. It will be a political failure if we can’t get an EU/UK travel policy,” he said.

He said that he hated comparisons being made between Ireland and New Zealand [where stricter protocols were introduced] and explained how South Korea “nipped Covid in the bud” because of its experience with Sars and Mers, previous epidemics caused by other coronaviruses.

“Ireland hasn’t been doing too badly in controlling the disease. If nobody left their house for three weeks, the virus would go away but that’s impossible to do. I always knew that we would beat this virus but I didn’t know when,” he said.

O’Neill said we knew that inward travel and too much contact between people were the reasons we failed before. “So the question is now whether we can bear more stringent regulations while the vaccine is being rolled out.”

An optimistic voice on our airwaves since the Covid pandemic began, O’Neill said he would personally take any of the Covid-19 vaccines on offer. “Once the top four priority groups in Ireland are vaccinated, the death rate will fall by 95 per cent, and the rate of illness and growth rate of the virus will go down too,” he said.

Asking people to leave the scientists to worry about the new strains of the virus, he said, “The best labs in the world are looking at the new strains; it [only] takes six weeks for companies like Moderna to make vaccines to beat new strains,” he said.

“I can’t wait until the bell goes off to say that we are at 90 per cent lower risk of disease, to bring us to the point that we aren’t so frightened of this virus,” he said.

However, he admitted that it will take longer for society to get back to normal. “We will stay cautious. I would like to see schools reopen after March 5th. I think we will be back in beer gardens with friends in June and [indoor] pubs towards the autumn but we’ll have one more summer holidaying in Ireland,” he said.

And he said the best way to fight this virus – and prepare for vaccination – is by staying healthy. “Get exercise. Get a good night’s sleep, look after yourself and lose a bit of weight. Don’t be going on the batter before getting vaccinated, but a glass of wine or a slice of cake is good for your overall wellbeing.”

A single price of €50 admits ticket holders to all events at the festival. Irish Times digital subscribers can purchase tickets at the discounted price of €25 – just make sure you are signed in and follow the link irishtimes.com/winternights. The discount will be automatically applied.