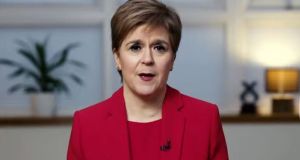 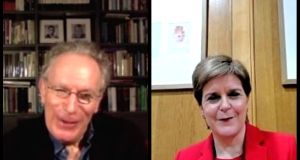 Brexit has made a united Ireland more likely, the Scottish first minister Nicola Sturgeon has stated. Sturgeon said the outcome of a Border poll was a matter for the people of Ireland, but “you can guess my general predilection around it”.

In an interview with journalist Fintan O’Toole as part of The Irish Times Winter Nights online festival, the leader of the Scottish National Party (SNP) said she “firmly believed” that an independent Scotland would happen.

When O’Toole asked her view on a united Ireland, the first minister responded: “It is entirely a matter for the people in Ireland ... I suspect Brexit probably makes that more likely than it was before.”

Sturgeon has made the holding of a second referendum on independence a central plank of the SNP’s campaign for Scottish assembly elections, which are due to be held in May.

If the SNP gets a majority in the Scottish parliament, it will demand that the UK prime minister Boris Johnson grants a second referendum.

Johnson has set himself against such a referendum and has argued that one so close to the previous one in 2014 is too soon.

Sturgeon has said it would be a “utterly undemocratically outrageous” if the Scottish Parliament voted in favour of a second referendum and Mr Johnson did not grant it.

When asked what she thought of Johnson personally, she responded that they were very different people and his politics were a “world away” from hers.

“I try not to give standard politician’s answers all the time in interviews like this. I leave people to work out what I really want to say.”

Boris Johnson was in Scotland on Thursday campaigning for the union. She said in normal circumstances she would have been all for a “deeply unpopular prime minister coming to lecture Scotland that we are a wee bit rubbish and can’t be allowed to decide our own future, but we are in the middle of a global pandemic so it wasn’t the most responsible thing to be doing”.

Sturgeon stressed she wanted to avoid a Catalonia-type situation where a referendum is called, but is not legally recognised internationally.

If Johnson failed to grant a referendum, she said, the SNP would challenge the decision in the courts and the courts would decide whether or not the Scottish parliament had the right to call a referendum.

“He would have to go to court to stand in the way of the democratic wishes of the Scottish people. All I would say to Boris is ‘good luck’. It’s not a position any self-respecting democrat should ever contemplate finding themselves in.”

There have been 20 opinion polls in a row showing a majority in favour of independence, the latest showing 49 per cent supported Scottish independence compared with 44 per cent who favoured remaining in the UK. The 2014 referendum was lost by 55 per cent to 45 per cent.

Sturgeon said the only argument that supporters of the union have had is that it was too soon to have another referendum. “They can’t argue the substantive case with any conviction or power”.

Democracy, she argued, is “not a fixed moment in time. People have a right to change their mind if circumstances change dramatically. One of the biggest arguments against independence is that we would be thrown out of the European Union.

“Now we find ourselves being taken out of the European Union against our will.”

Sturgeon said the Westminster government was looking at setting up a Royal Commission to examine devolving extra powers to the Scottish parliament, but she pointed out that the people of Scotland will have no input into it.

She described Scottish independence as being different from far-right nationalism as it was outward-looking and pro-immigration.

Nicola Sturgeon was talking to Fintan O’Toole as part of the Irish Times Winter Nights festival, a series of online talks and events taking place from January 25th to 29th. The festival is supported by Peugeot. Still to come on Friday are guests including teenage nature writer Dara McAnulty, actor Gabriel Byrne and CNN news anchor John King.

For tickets to the remaining events in the festival, see irishtimes.com/winternights. A single ticket costing €50 admits ticket holders to all events at the festival. Irish Times digital subscribers can purchase tickets at the discounted price of €25. Just make sure you are signed in, and the discount will be applied automatically.