Kilkenny festival to present mixture of virtual and live events 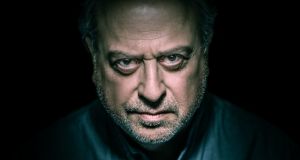 Like everyone, most of my culture over the past few months has been online. And a great deal of what I have seen, while occasionally wonderful, has served to remind me of what I’m missing most of all: those golden moments of connection. Live performance is about the spark of a shared consciousness, a sudden jolting to another emotional register.

So how do you strike a balance? How do you create a Covid-safe live performance that also pushes boundaries and challenges expectations? A festival, it turns out, is the ideal space to find out. First, Cork Midsummer programmed Corcadorca’s Contact, and now the Kilkenny Arts Festival is presenting a mixture of virtual and live events.

“The need to adapt to online and virtual was necessary and continues to be,” says Kilkenny director Olga Barry. “But our screens were also giving us a lot of complex and frightening information,” she continues. “I’m usually a news and radio addict, but I couldn’t bear it. What I really wanted was to get lost, to be absorbed into an experience.”

For Barry it was vital to find a way, “however small, however managed, to bring people back into the room. Bringing people back together is really important.” Describing the fate of her original plans for what was to be the 47th festival, she is wryly philosophical. “It got a kicking, then it got its head chopped off, then it got another kicking. Undoing a festival is definitely way harder than making one.”

So too is remaking a festival, as the Covid threats remain real. There is the ever-present danger of another wave, of another version of lockdown. “We need to rebuild, rebuild incrementally, remain adaptable and start taking careful steps forward. Acknowledging that it may fail is part of it. I’m comfortable with the idea of failing, but less comfortable with the idea of failing for the lack of trying.”

“Dance is really suited to expressing things that people don’t know how to put into words,” says Luke Murphy, whose career as a performer and choreographer has taken him to New York, Brussels, and now a house on west Cork’s Sheep’s Head Peninsula. “We are all so literate in body language, even as dance deals so much with abstraction.”

Murphy’s original plan for Kilkenny was to create a dance experience along the lines of a rock concert. However, “I feel as if the last thing the world needs now is a rock concert,” he says, describing it as neither relevant nor suitable. “So you’re left with the remnants, and, with that, this new work started to rise, like a flower, out of a lot of compost…”

That compost includes the experience of spending three months isolated in the west. “The house has one room with a big window, facing south,” he says. “Everything else is pretty dark, so I’ve been spending a lot of time, essentially, in one room. There’s a lot of things this time has brought up; there’s a relentless nature to product-orientated creation, which isn’t always the most effective way to make good work. This time was the first time I’ve stopped.”

The resulting work is a durational performance at the new Butler Gallery. Murphy will be on one side of a screen and the audience, coming and going, on the other. “People will be able to watch an expression of the experience of time, and of isolation. That different relationship to time is something everyone can relate to.”

When we speak, Murphy is still rehearsing in his living room, a space similar in size to where he will perform in Kilkenny. “There’s a certain sense of trial and error,” he says. “I can’t meet with the video designer in person, we’re trying to work by email and Zoom, and that’s difficult.

“And anyway,” he continues, “no piece exists without an audience, and that is still to come. This is a really interesting time to be dancing for people,” he concludes. “There’s a lot of physical response in being restricted, and people have been restricted for so long.”

‘There’ll be a tent’

“Kilkenny is a highlight of our year,” says Katherine Hunka, leader of the Irish Chamber Orchestra. She described being devastated at the news it wouldn’t be going ahead as planned. “It was just one of many devastations of course. Then Olga had this extraordinarily courageous plan to try something. The day I found out we were going to do something, I was on this massive high. We have a gig!”

The gig is to present both Astor Piazzolla and Antonio Vivaldi’s The Four Seasons, as well as a series of micro-music sessions, which will be with Crash Ensemble. The concerts will be outside. “We have to hope all hell doesn’t let loose with the rain,” she says. “There’ll be a tent. The last movement of Summer in Vivaldi is hailstones,” she muses, wondering at tempting fate.

The Irish Chamber Orchestra hasn’t rehearsed together since March. “It’s hard for so many reasons. I’ve played concerts since I was four. I’m now 47. It’s like you’re stripped of your identity. And we’re so close, we all know each other so well, and now we don’t meet any more.”

She describes Zoom drinks, and the phone calls to check in on one another. “But you can’t rehearse on Zoom, on Zoom only one person is heard at a time. You can’t play together.”

The orchestra will finally get together in August, short weeks ahead of the performance. “I’m so grateful to the festival for doing this, for making a step towards live performance. That electricity that happens with a performance, there’s no replacement for that. The idea of being in a space with people, where you can capture their hearts, I’ve missed that so much. It’ll be a massive deal.

“When we come out of our homes and meet again. I’m not sure yet if the UK players can come over, but we’ll make it work. Oh my god, yeah.”

Rough Magic’s production of Mike McCormack’s award-winning novel Solar Bones had been planned for a while. A one person show, adapted by Michael West and starring Stanley Townsend, it was put on pause from 2019. “We were full steam ahead for this year, and then Covid happens,” says company director Lynne Parker. “But if you are doing a show, Solar Bones is a really good one to go with,” she considers thoughtfully.

The play, the musing of a dead, middle-aged engineer, does seem to be apt for these days, when we have all had to draw on our interior lives to make it through.

“The subject matter really suits it,” agrees Parker. “For jollier things, we’ll have to look to outside performance for a while. We’re all working it out together. It will all happen very slowly, and this pace will suit well. Usually you’re going helter skelter towards opening night.”

In working out how to put on a show, she has huge praise for Peter Jordan of Slua Event Safety.

“He has been doing incredible work with all the production people,” she says of the rigorous teasing out of what is and isn’t possible, and how to make the potentially impossible happen, safely. “We’re doing stuff by Zoom. It’s better than you think. But Stan needs to get into the space, he needs the muscle memory. We had three days there, with a system of logging, Covid gear, contact tracing. It has to be done.”

She describes forgetting the “don’t touch” rule. “I touched a cup, we had to go wash it, you have to train yourself. It seems a pain, but it’s important. Even just to get a coffee is a process. We’re all learning together.” Zia Holly, the set and lighting designer, is in London. “We did a week-long staged workshop at the Mermaid last year, and we got our initial ideas arising from that. But unless restrictions are dropped, she’s going to have to do this by Zoom.”

Townsend has been in Leitrim. “He had been in New York, doing Incantata, almost right to the point when things exploded. He just made it back to Leitrim in time.” It also helps that Townsend is a founder member of Rough Magic, having met Parker when he was studying engineering (another helpful coincidence) in Trinity.

“Live performance has got to be preserved,” says Parker. This will probably be for only 50 people, but God knows, I’ve done shows to smaller houses than that…”

She describes more of the complexities, the rules for set construction, how you need PPE if something needs lifting by two people, but is less than 2m long. “And Stanley will probably have to dress himself. But he does that most days anyway… It’s been a long road to making the piece, but really is miraculous that we’re going to see it. More power to Kilkenny.”

The Kilkenny Arts Festival X runs in Kilkenny and online from August 7th-16th, with further events coming this autumn. kilkennyarts.ie