The concerts and events still taking place across Ireland this summer

Government restrictions have limited capacity but some festivals are still on 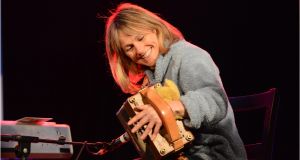 Last Saturday night, just after 9pm,  singer-songwriter Freddie White picked up his guitar and walked onto a stage in Doolin, Co Clare. There to greet him was a socially-distanced live audience of 50. For all involved, it was  slightly surreal.

“I was supposed to start a tour in May,” said White ahead of the gig in the barn space at Hotel Doolin. “And then the lockdown happened.”

With Ireland slowly and tentatively emerging from lockdown, arts organisations are mapping their trajectory through the “new normal”. Given the challenges posed by Covid-19 there will be inevitable setbacks. A jump in infections has already prompted the Government to push back “phase four” of the opening up from the original date of Monday, July 20th.

Because of the delay, current restrictions of a maximum of 50 people at indoor gatherings and 200 at outdoor ones will remain until August 10th. After that the limits will be increased to 100 indoors and 500 outdoors.

“The venue I’m playing holds about 300,” nods White. “They can only stick 50 in there. It will be a little bit sparse. But I’m sure it will be enjoyable.”

White’s concert is the first of a programme of gigs at Hotel Doolin, run in accordance with HSE guidelines through late July and August.

His concert is already a sell-out as are dates by Susan O’Neil (July 25th) and Sharon Shannon (August 1st – with a matinee the same day already filling up). Also announced are shows by Scullion, Luka Bloom, Lisa Hannigan and others through August.

“There has been a great reaction,” says booker Conor Byrne, who reveals that Hotel Doolin is making the venue available free of charge. “Sharon has sold out the evening show. Everyone wants to play.”

Across the arts, programmers are reconfiguring events to abide by government regulations. With no Electric Picnic, All Together Now or Longitude in 2020 it has, meanwhile, been a trying summer for festival fans. There is a flicker of light on the horizon, though, with “micro-festival” Home taking place at Mount Druid estate, at Castletown Geoghegan, Co Westmeath, August 28th to 30th.

As things stand, the capacity for the festival is 100, as per the scheduled easing of the lockdown. However, organisers say there are “contingency” plans in the event of phase four being pushed back until the end of August.

“The idea was borne out of this awful isolation that we’ve all gone through,” says Deirdre Young of H&G Creations, the event production company putting on Home. Around 70 per cent of tickets, priced from €268.95 to €311.95, have already been sold she revealed. Accommodation must be booked separately through Mount Druid.

“It’s quite spread out,” says Young. “So it’s ideal for social distancing.”

Activities will include banquets, cocktails, plus DJs and music performers, with electronica duo Prymary Colours already confirmed. The organisers stress that health and safety is a priority. Anyone feeling unwell prior to arriving at the festival will be given a full refund. “Obviously that’s not ideal for us,” says Young. “But we don’t want to take a chance.”

“We are asking people to take their temperatures before they arrive on site. And we will be taking their temperatures as they are coming in. We don’t want to send people home. But if you have [a high temperature] you’re going to be sent away and we can’t refund your ticket then [at the door].”

In Roscommon in July, meanwhile, speakers such as Professor Ray Kinsella, Declan Ganley and Professor Gerard Casey will be at the socially distanced Percy French Festival (Castlecoote House, July 22nd–24th).

Masks will be required throughout and no tickets will be sold at the door, so as to allow for seating arrangements to comply with HSE guidelines. The festival has already had a brush with controversy. London-based journalist Mary Kenny had been announced as a speaker. Following an outcry it was confirmed, however, she would not be travelling to Roscommon.

“To counter the biggest risk of spreading Covid-19, we decided to hold the event outdoors, in a very large marquee with a ceiling height of 20ft and a floor area of 2400 square feet,” says festival founder and director Kevin Finnerty in an email. “So that was the first new departure. A must in this respect was there was to be a constant movement of air which would be provided by a permanently open entry and exit doors to the marquee. Being in the month of July too helped as the latter would not be difficult to endure.

“The bigger space enjoyed by the large marquee meant we could space the seating two metres apart, and further have insisted that all attendees wear masks, which we are providing free of charge. Further all hard surfaces are to be wiped clean every 30 minutes, hand sanitisers and signs everywhere, all of which adds considerably to management costs.”

Theatre has been disrupted by the pandemic too. Dublin Fringe Festival (September 5th–20th) has announced a “Pilot Light Edition” for September. “A constellation of artists will create a series of performance experiments and artistic interventions all over the city,” the festival’s programme states. “Fringe will find a way to reach you – we’re imagining tiny revolutions of connection across multiple mediums.”

As part of October’s Dublin Theatre Festival (September 24th–October 11th), meanwhile, the Abbey and IMMA are to collaborate on “ a site specific, promenade production” of Patrick Kavanagh’s The Great Hunger jointly directed by Caitríona McLaughlin and Conall Morrison. “A large cast of actors and musicians will boldly bring Kavanagh’s tragic masterpiece to life on the grounds of the Royal Hospital Kilmainham,” says the Abbey.

Come October will the “New Normal” look anything like the Old Normal? In light of recent setbacks it is surely too soon to predict. What is clear, though, is that the artistic community is determined to adjust to these challenging times and connect with the public.

“We’ve all got a little bit of Zoom fatigue,” says H&G Creations’ Deirdre Young. “It’s nice to be able to come together in a safe manner but in real life. People are missing that connection.”

‘Conor McGregor is an inspiration. There’s a severe vulnerability to him’
7