Ireland can manage without the church but can it do without myths? 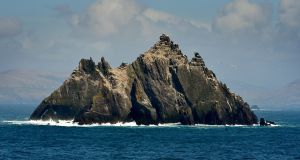 ‘If you go from the Skelligs to the Giant’s Causeway, everything about the land has a mythological surface to it.’ Photograph: David Sleator

In an era of fake news and state-sponsored disinformation campaigns, and when the very notion of truth is attacked by fascist and authoritarian forces, it’s not immediately obvious that Ireland should position itself as a “conservatory of mythology”.

But that is exactly what Mark Patrick Hederman is advocating. The former abbot of Glenstal Abbey in Co Limerick believes western civilization needs “mythic intelligence” now more than ever.

“Ireland, along with Greece and the Scandinavian countries” which all have “vast mythological archives”, he says, “could provide a haven for this part of ourselves . . . We could provide for Europe, and for the world, an oasis in the desert of unilateral thinking.”

By mythology, Hederman means “a third way of truth between fiction and fact”. It tries to answer questions about life’s meaning and human purpose that are beyond the capacity of pure science, Hederman argues in his latest book Living the Mystery: What lies between Science and Religion (Columba Books).

It’s not a matter of pitting reason against folklore, says Hederman – this week’s Unthinkable guest. Both have their place in enabling us to learn and flourish. Or, as he puts it: “Mythic intelligence is not something childish to be discarded as we grow up; it is an essential part of human understanding.”

You argue that a mythological outlook is necessary. Why so?

Mark Patrick Hederman: “Every culture, every tribe produces a myth. It’s not everything but it’s a way of explaining what’s the meaning of the fact that we are here. I think every person needs to provide themselves and their children with an explanation for that. That’s the function of most religions, in a way.

“Every human civilization builds a temple of some kind which explains to the neighbouring [CIVILIZATION] or even ourselves what we regard as the function or the purpose of our being here.

“It’s always a myth. A satisfying story does people.”

And we have had such satisfying stories, many of which have lost credence with scientific progress. Can you go back to inhabit myths once they have been discredited?

“The point there is the Catholic church as present is trying to do that. And so are many other conservative people, saying, ‘Look we are not going to leave the nineteenth century, we are going to stay there.’… and you are perfectly entitled to live that mythology; why not?

“But most people in the twenty-first century are not satisfied with that and realize that anyone who is on that side of the divide, living in the nineteenth century, are going to become an irrelevant minority with no purchase or no influence on what happens to the world as we progress.

What dreams are to an individual, myths are to a whole people or culture

“I think everyone is entitled to live their own mythology. I’m mean, we are living our own mythology in Glenstal Abbey as monks… It’s all organized according to a view of life based on the rule of St Benedict which was written in 1428. And people all over the world do that, and they are perfectly entitled to do it. Everybody else thinks they’re eejits but that’s fine.”

How do you decide what myths to keep? Is the measure of a good myth its therapeutic benefit rather than its scientific truth?

“Here’s the point. We’ve only discovered recently the whole phenomenon of the unconscious and we have no access to it but we must try to get in touch with it.

“The 20th century was a workshop and a kind of example of what happens when people who are not in touch with their unconscious are in charge. The big poster boys for that were Stalin and Hitler. But they have all kinds of mini-examples of themselves in people who are involved in schools or borstals or institutions of one kind or another, and every one of us is Hitler or Stalin in miniature.

“So we have to get in touch with that massive undertow which is the unconscious and the way we do that is through our dreams. That’s one way. Art is another way. But what dreams are to an individual, myths are to a whole people or culture.

“In other words, that whole mythology is the dream time of the particular tribe or culture you belong to, and nobody suggests you take everything from it literally or that any part of it are dogma, or definite. You delve into it and find whatever part of it is helpful to yourself. So it’s a completely different system to a catechism or a prescriptive handbook.

“Dreamtime and mythology are an endless wardrobe of possibility and each person has to find their own combinations and own particular choice of dress.”

How do you gain knowledge through mythology?

“Our brains, we have discovered, have three storeys to them, as it were. You have the serpentine brain which is at the very bottom which we share with reptiles. And that is a kind of little bump that developed into a brain after 50 million years.

“On top of that you have the limbic brain and that apparently developed when we began to produce children as opposed to laying eggs, which the serpents did. And the serpent who lays his egg has no interest in his offspring – he just lays the eggs – whereas the limbic brain is an emotional development on top of the serpentine brain which comes from caring for our offspring, or finding ourselves emotionally involved with other people.

“Then on top of that again is the neo-cortex, which is the third storey and the largest one, and the newest one – neo meaning new – but that doesn’t make it the only one.

“So between the neo-cortex and the serpentine brain this limbic brain is where poetry and mythology are understood and they have their own particular language and we have completely neglected that. We have almost wiped it off the desktop, especially of younger people who now from the age of four are given a diet of completely neo-cortex intelligence.

“My great advantage in life was never to have been in school until I was nine.”

Is religion a myth?

“If you say myth means lies – which is what we’ve been told – then if you say religion is a myth then you’re saying it doesn’t mean anything; it’s not true. But what I’m trying to show in this book is that it is a reality, an epistemology, a part of our brain, and that it’s between fact and fiction.

“I know many of the priests in Ireland and elsewhere have been silenced by the Vatican for telling people the Bible and what’s recorded in it is ‘only a myth’. And what I’m saying is it’s not only a myth. It’s specifically a myth. And it’s a form of truth which is called the gospel truth. It is not a lie and it’s not a falsehood.”

What makes Ireland so special that it might become, as you recommend, a conservatory of mythology?

“Ireland is really a very interesting little tiny island and the smallness of it and the geography of it are amazing because if you go from the Skelligs to the Giant’s Causeway, everything about the land has a mythological surface to it.

“And I’m saying why not use that? I’m just thinking of all the lighthouses we’re not using could be used as interpretive centres . . . The Cliffs of Moher, for God’s sake, the first tectonic plates which moved us away from Nova Scotia on the other side of the world.

“So this whole island could become a most marvellous exemplar of what nature does. In other words, nature becomes another kind of scriptural reading. That from a tourist and economic point of view – we haven’t much else to offer – is what Ireland could become. It could develop imagination as its major suit.

“I mean, people go to psychoanalysis to get in touch with their unconscious. I’m saying that should be done at a geographical and a tribal level as well, and we have the perfect landscape and toolbox for achieving that.”