Little things can be irritating even in favourite poems 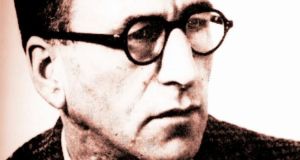 Patrick Kavanagh: “Through a chink too wide there comes in no wonder.”

After his Fianna Fáil/Labour coalition government fell in November 1994, the then taoiseach, Albert Reynolds, commented: “It’s the little things that trip you up.”

The man who shepherded through the 1993 Downing Street declaration, a crucial step on the road to the 1998 Belfast Agreement, was brought down because a civil servant in the attorney general’s office delayed eight months in processing extradition papers for child abuser Fr Brendan Smyth to Belfast.

It was the second Irish government brought down by an incident directly involving the Catholic Church. The first was in 1951 when a government fell after it tried to introduce a mother-and-child scheme the church opposed.

Enough of that. It’s not politics I want to address here, but poetry. On which point few (other) little things irritate me more than people grandiosely pronouncing the work poem, as the featherlite “po-em”.

The little things that irritate me in two of my favourite poems may seem petty but could be your problem some day. First, Advent by Patrick Kavanagh. Don’t you think he could have done better with the second line: “Through a chink too wide there comes in no wonder.”

Great wisdom, poor expression. Surely “there comes no wonder” would have been more pithy? Why the irritating “in”? It is as intrusive as an unwelcome guest crashing a party? Especially as the next line also includes an “in”: “But here in the Advent-darkened room.”

Methinks the Monaghan man was being sloppy. Pity. It jars in what is a very affecting poem with its “black slanting Ulster hill”, “whins”, “bog-holes, cart-tracks, old stables” and “heart-breaking strangeness in dreeping hedges”.

And Yeats. Probably our greatest poet but, on a human level, nowhere near as great a soul as Seamus Heaney. Yeats’s Second Coming, with its rough beast slouching towards Bethlehem to be born, must be among the most quoted poems of modern times.

It’s that line: “The best lack all conviction, while the worst/Are full of passionate intensity.” It is annoying to see it so frequently quoted as truism when Yeats was only making an observation on the times in 1919, after the first World War and as Ireland’s War of Independence began.

Not that the worst ever lack “passionate intensity”. Eh, Donald?

Poem, from Latin – and Greek – poema, for “composition in verse”.

A letter to Ireland from Italy: this is what we know about your future
7 Miracle warnings and a lack of bull
8