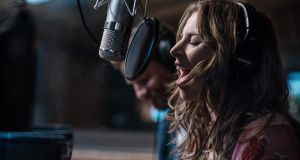 Oscar season in Toronto: Lady Gaga in A Star Is Born

It was a very special edition of Toronto International Film Festival for the Irish director Carmel Winters. At the screening of Float Like a Butterfly, her follow-up to the critically acclaimed Snap, on Friday she told us that, during the event, she had married her production designer Toma McCullim at City Hall. On Sunday she learned that Float Like a Butterfly, which tells the story of a young traveller who models herself on Muhammad Ali, had won the Fipresci Prize for the Discovery Programme.

It’s an important award at an increasingly influential festival. This is where Oscar season kicks off. Peter Farrelly’s Green Book took the Grolsch People’s Choice Award and was immediately marked down as an inevitable best-picture nominee. Only one winner of that award in the past decade has failed to secure a place in the big Oscar race. Farrelly’s film, starring Mahershala Ali as an African-American concert pianist being driven about the American south by a rugged Viggo Mortensen, will surely be joined by the two runners-up here, Barry Jenkins’s If Beale Street Could Talk and Alfonso Cuarón’s Roma.

Roma is a classic in the art-house style of the 20th-century masters. The director of Gravity and Children of Men views a middle-class family’s breakdown through the eyes of their loyal maid. Shot in gorgeous 65mm monochrome, the Netflix production – rich with enormously detailed tracking shots – demands to be seen on a big screen. Nobody is yet sure if that option will be available outside the United States.

If there is a more visually pleasing film this season than If Beale Street Could Talk then we’ll be doing very well indeed. The incandescent newcomer KiKi Layne plays Tish, a young African-American who, as the 1960s bubble around her, fights to stay hopeful when her boyfriend is falsely arrested for rape. The picture combines the fantastic, extravagant beauty of Jacques Demy’s Umbrellas of Cherbourg with a robust critique of the United States’ racial divides. Some found the characters a little idealised, but Jenkins is making no pretences to realism.

Damien Chazelle’s First Man, starring Ryan Gosling as Neil Armstrong, also played to great acclaim. Gosling has always been at home to reserve and is, thus, the perfect man to play a hero famed for his unknowability. The picture touches on public ambivalence to the Apollo project and invites Claire Foy, who makes the most of Armstrong’s wife, Janet, to articulate the toll on families. Very good on the sensory effect on the astronauts, the picture stands as great example of all-American, epic film-making.

Steve McQueen’s Widows somehow manages to mesh that director’s sombre visual style – seen to advantage in Hunger and 12 Years a Slave – with a story that occasionally verges on the absurd. Viola Davis leads a team of villains’ widows, including Elizabeth Debicki and Michelle Rodriguez, on a daring heist in contemporary Chicago. Colin Farrell and Robert Duvall play two generations of corrupt Irish-American politicians. McQueen negotiates the unlikely plot developments to deliver a film that offers real thrills while addressing such concerns as Black Lives Matter.

Elsewhere, in recherche territory, Brady Corbet, the young director of Childhood of a Leader, exceeded expectations with the singular Vox Lux. Natalie Portman has never been better as a pop star, survivor of a school shooting, facing up to a gig in her home city. Although Corbet wears his influences on his sleeve, he is establishing an off-kilter grandeur that is all his own. Fans of Scott Walker will be pleased to hear that his original score is as stubbornly brilliant as ever.

Portman’s character looks to be a variation on Lady Gaga, which was neat because her ladyship was in town to launch Bradley Cooper’s A Star Is Born. There were some sniffs when it was announced that Cooper was unearthing the already twice-remade warhorse for his directorial debut. Returning to the milieu of the much-derided Barbra Streisand version, Cooper plays a boozed-up rock star and Gaga the rising ingenue. The film is a resounding success: moving, foot-stomping. For somebody who often seems a bit grand in interviews, Gaga does an extraordinary job of playing an ordinary Jane. It will be a sensation.

There’s no point pretending the Oscar odds aren’t already being calculated. Green Book, Roma, First Man and A Star Is Born all look like certain nominees. (Your correspondent has an early wager on the latter at an already much-shortened 11/1 to win.)

Michael Moore’s Fahrenheit 11/9, a characteristic survey of the United States under Donald Trump, could figure in the documentary race, but it might be a little too close to his standard formula – comic montage, solid reporting, lame stunts – to win the award.

No mainstream gongs will come the way of Peter Strickland’s In Fabric, but fans of that director’s The Duke of Burgundy will find much to enjoy in his latest dalliance with tropes from 1970s euro-horror. Terrific performances from such varied actors as Marianne Jean-Baptiste, Hayley Squires and Gwendoline Christie juice up the story of a haunted dress that passes misery on to successive possessors.

Paddy Breathnach’s Rosie was among the best of the current batch. Concerning an everyday working family rendered suddenly homeless, Roddy Doyle’s script makes no apology for zeroing in on a pressing socioeconomic issue of the day. It’s a fine, focused film that will trigger heated discussion. Sarah Greene and Moe Dunford are typically strong as the parents.

All hail a “return to form” for Neil Jordan. The director’s Greta received exactly the sort of good reviews you’d expect for a Jordan thriller featuring Isabelle Huppert as a deranged stalker. The audience at the Imax screening I attended were leaping from their seats at the pounding reveals and howling at the ever-heightening absurdity. It is never less than indecently entertaining. (And, yes, Jordan has found a role for Stephen Rea. )

John Butler follows up his much-liked Handsome Devil with a highly original Los Angeles dramedy entitled Papi Chulo. Matt Bomer plays a gay weatherperson who makes an unlikely friendship with a middle-aged Latino handyman following the end of a long-term relationship. It’s a disciplined film that manages to avoid patronising the older man. The segue to something more serious is seamless.

Opinion was divided on Chanya Button’s Vita and Virginia. Shot largely in Dublin, and produced by Blinder Films, the picture seeks to tease out the fecund relationship between Vita Sackville-West and Virginia Woolf. Eileen Atkins’s script relies a little too heavily on the two writers’ letters, but, utilising an effective electronic score, Button does make a real effort to fashion something weird of the piece. Gemma Arterton is underexploited as Vita. In contrast, Elizabeth Debicki brings unlikely exoticism to a writer often unfairly portrayed as a damp rag.

And then there was Carmel Winters’s surprising, crowd-pleasing Float Like a Butterfly. Rigorously researched, rich in Traveller lore, the film offers a more romanticised version of that community than we’re used to in Irish cinema. It begins with young Frances – a startling performance from Hazel Doupe – seeing her mother die and her father carted off to jail. Later they go on an awkward odyssey about a hostile nation. Winters was jumping with happiness at the screening – and that was before she won her gong.

THE FIVE BEST FILMS AT TIFF

1. Vox Lux (Brady Corbet) Intense, surprisingly intimate study of a pop star struggling with a past trauma. Natalie Portman is electric in the lead.

2. A Star Is Born (Bradley Cooper) No new angles are brought to the old Hollywood yarn, but the film is so beautifully made that only the terminally grumpy will complain. Irresistible.

3. If Beale Street Could Talk (Barry Jenkins) No, Moonlight wasn’t a fluke. Jenkins makes something hypnotically sad of this story from James Baldwin.

5. In Fabric (Peter Strickland) A department store run by witches from vintage Italian horror? Disturbing 1970s TV commercials? A haunted dress? It can only be Peter Strickland.