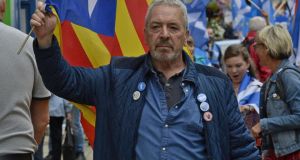 In many ways, JH Elliott’s book Scots and Catalans: Union and Disunion, is timely. Both these groups have seen referendums on independence in the last five years. Indeed, the Catalans have seen two (one in October 2017, and another in November 2014, less than two months after the Scottish one). But Elliott is not a ripped-from-the-headlines pundit type. He is the UK’s leading historian of Spain, with a focus on the 16th and 17th centuries. It’s no wonder, then, that the best parts of Scots and Catalans are the earlier ones.

Elliott begins in the late 1400s and takes us to the present day, providing a detailed dual history of these countries. But one danger of the rigour that defines Elliott’s writing is that he sometimes gets so caught up in telling one side of the story (usually the Catalan one) that we lose track of what it has to do with the other. Such is the danger of any “parallel history”, and Elliott acquits himself on this front better than others have. But his world-class expertise in the Iberian Peninsula and his relative distance from Scottish history (“As far as I was concerned, the history of Scotland was unknown territory and I have learnt a great deal,” he writes in the acknowledgments ) sometimes shows.

The key comparative insight that forms the core of this earlier part is the identification of both places as a “composite monarchy” , something that speaks to a deeper diversity in each kingdom. Even in the “Union” phase of their development (there is a chapter devoted to the 1707-1789 period), Elliott argues that this duality had a way of lessening the narrower and more domineering forms of nationalism, writing that “the inclusion of representatives of the Crown of Aragon turned the Cortes into a Spanish, as distinct from Castilian, institution, just as the coming of the Scots to Westminster had transformed the English parliament into a British parliament”.

Many recent observers have argued that both Spain and the UK are federations in all but name and should strongly consider accepting reality. What Elliott prizes in these early manifestations, though, is not exactly federalism, but something subtler and more pragmatic than a model he finds to have been a mess in practice. “Federalism, republicanism and regeneration might be the order of the day, but when the Federal Republicans were finally installed in government in 1873,” he writes of the Spanish case, “they failed disastrously, in part because of bitter divisions between all-out federalists and those who were afraid that intransigent federalism would result in the break-up of Spain”. To put it in an English way, he favours a common law, let’s-all-muddle-through-together-type solutions over the misplaced intensity of formal amalgamations.

Despite his originality and the depth of his research, I bristle at the way that Elliott portrays the contemporary Catalan situation, which he sees as marked by narrowness and propagandising. Like many defenders of the Spanish state, he worries about linguistic chauvinism, writing of “compulsory Catalan for all schoolchildren, at a time when Castilian was already being taught in the schools as a separate subject” and elsewhere laments “a generation that had learnt Catalan at the expense of Castilian in the schools”. This is a common theme among Spanish unionists, one that is not borne out by the census, which in 2013 had the number of people who report being able to write Catalan at 60.38 per cent and Castilian at 95.9 per cent.

He also seems to conflate the influence of Esquerra Republicana (a relatively venerable left party that in 2015 ran in coalition with Catalonia’s dominant centre-right nationalists but whose leader he places among the “radical anti-capitalists”) with that of the CUP (a very small far-left party made up of actual radical anti-capitalists that twice won just enough seats to play kingmaker and which really did exert an unhealthy influence on the now-exiled Catalan ex-president Carles Puigdemont). I also don’t accept his caricature of the movement for full independence as “the preserve of the political class and of the middle and professional classes”, another common rhetorical feint among the elite political class everywhere. I recognise that from the anti-separatist Quebec Liberal party’s electoral slogan of focusing on “ les vraies affaires” as though the Plain People of Small Nations care nothing for such airy considerations as identity. On his harshly frank assessment of the Catalan referendum as illegal and thus illegitimate in a way that makes it different from the Scottish one, though, I can only sigh in frustrated agreement.

Overall, Scots and Catalans’ ongoing discussion of an early-modern formation that is not quite federalism resonates very compellingly indeed with contemporary realities. Nobody writing in English knows more about early modern Spain than Elliott, and so even when I disagree with him, I still only rejoice at the depth of context this book brings to two highly unpredictable political situations.
Jerry White is Canada research chair in European studies at Dalhousie University (Canada) and is writing a book on Catalan cinema