Hollywood’s a cruel place. But not as cruel as it used to be. Here’s why

Women over 40 are no longer relegated to tweed twinsets. It’s progress, of a sort 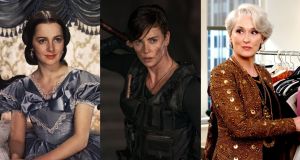 Anyone who gives a heck about Hollywood was moved by the death of Olivia de Havilland at the weekend. The last surviving star of Hollywood’s golden era – right back to the 1930s – was gone at the terrifying age of 104.

Time to bitch about how much more fecund the business was in the era of Bette Davis, Joan Crawford, Barbara Stanwyck and Ms de Havilland herself. Throughout the 1940s and 1950s, something called the “women’s picture” put those actors right at the heart of high-end drama. You don’t get films such as Mildred Pierce, Now, Voyager and Stella Dallas any more. Well, not too many of them.

One moment. If we can allow ourselves some good news, a perusal of Olivia de Havilland’s career reminds us that, in one way at least, Hollywood has become a more welcoming place for women. She won her second Oscar, for The Heiress, in 1949. She was just 32. Gone with the Wind, Captain Blood and The Adventures of Robin Hood were behind her. The future could hardly look more rosy. Yet she never again hit those heights. There were good roles in My Cousin Rachel and Not as a Stranger, but, by 1960, now living in Paris, she was no longer part of the conversation. She was relegated to horror pictures and guest roles on TV shows.

The stars of the Golden Age were permitted on the big screen, but only in projects macabre enough to contain their apparently monstrous superannuation

The same was true for de Havilland’s contemporaries mentioned above. Bette Davis’s finest role was arguably as the monstrous, ageing diva in Joseph L Mankiewicz’s immortal All About Eve. The delicious Margo Channing throws barbs over her shoulder as Anne Baxter’s Eve Harrington advances on the inside straight. Davis, then just 42, could see the writing on her own dressing-room wall. She excelled in later films, such as The Catered Affair and The Virgin Queen, but, by the time of the Kennedy administration, she too was a long way from the A-list.

Crawford and Davis famously returned for Robert Aldrich’s What Ever Happened to Baby Jane? in 1962. That was, however, a qualified class of triumph. Both still in middle age, they were playing grotesque versions of actors from a forgotten era. Davis was rewarded with less prestigious shockers such as The Nanny and Madame Sin. Crawford’s final screen role was opposite a reanimated troglodyte in the low-rent British horror Trog. De Havilland’s appearance opposite Davis in Hush... Hush, Sweet Charlotte, Aldrich’s 1964 follow-up to Baby Jane, was no more useful in reopening doors to prestige productions.

Many of these films are worth digging out (the Aldrich pictures are timeless), but, viewed from one angle, this late surge was almost more insulting than being ignored. The stars of the Golden Age were permitted on the big screen, but only in projects macabre enough to contain their apparently monstrous superannuation.

In retrospect, the thoroughness with which Hollywood washed its hands of its older women stars seems scandalous. Male icons aged into decent character parts in big movies. Bette Davis was reduced to guest roles on The Virginian. Anne Baxter may have nudged Bette aside in All About Eve, but, by 1973, that actor was a suspect on Columbo (no offence to the greatest cop show ever made).

Charlize Theron, whose action flick The Old Guard is currently a smash on Netflix, is two years older than the Bette Davis of All About Eve

Now it’s time to have some fun with mathematics. Julia Roberts was a year older than de Havilland in The Heiress when she made Notting Hill. She has not gone away. Charlize Theron, whose action flick The Old Guard is currently a smash on Netflix, is two years older than the Bette Davis of All About Eve. When Meryl Streep was the same age as Davis in What Ever Happened to Baby Jane? – playing a pathetic geriatric, remember – she was bouncing about the Everglades in Charlie Kaufman’s Adaptation. The Hours, Mamma Mia! and The Devil Wears Prada were still to come.

“I remember as I was hovering around 40, I thought each movie would be my last, really,” Streep told the Wall Street Journal in 2006. “And all the evidence of other 40-year-old women at that time... would lead you to believe it was over.” Happily, that proved to be far from the case.

Much of the rest of this column will be filled with qualifications (so take a breath before “but... but... ”). There is, however, undeniably a contrast between how the industry now treats its older superstars and how it treated them in the 1960s and 1970s. It’s still a cruel business for older actors. But no equivalent of the near-total erasure that befell de Havilland’s generation has taken place. Meryl Streep, Helen Mirren, Maggie Smith and Glenn Close have all received Oscar nominations in their 60s. Judi Dench has, since middle age, enjoyed a busier career in film than she did as a young woman.

Not all of the world is in that proverbial fiery hand basket.

Streep would, nonetheless, be the first to introduce some icy reality into the conversation. We still come across women actors who, after a few starry years, fade into the background when 40 looms. If the #MeToo scandal has taught us anything, it is that more than a few of those women were punished for rejecting the sexual advances of powerful men. Only an idiot would pretend that is not still going on.

Male movie stars retain romantic-lead status opposite women up to 20 years their junior. How often does 58-year-old Tom Cruise cuddle up to someone his own age?

Meanwhile, the movies that make all the money continue to deal disproportionately with the affairs of men. A study from 2018 revealed that just over 32 per cent of characters in 50 of the US’s top-grossing flicks were women. The figure was worse still when you narrowed the analysis down to leads. This is hardly surprising when male movie stars retain romantic-lead status opposite women up to 20 years their junior. How often does 58-year-old Tom Cruise cuddle up to someone his own age?

“These are the roles they write for women my age,” Streep said. “Usually they are sort of gorgons or dragons or in some way grotesque.” In recent years she has been Oscar-nominated for playing a witch in Into the Woods, a bitch in The Devil Wears Prada, a lovable nut in Florence Foster Jenkins and Mrs Thatcher in The Iron Lady (and won for the latter).

So we shouldn’t get too carried away. But it remains undeniable that the upper echelons of the acting sorority are far more durable than they were when de Havilland passed into middle age. This reflects a culture that no longer expects anyone over the age of 40 to dedicate life to tweed twinsets and flower arranging. It confirms that Hollywood has seen the potential in older audiences.

Movies aren’t what they used to be. In a few ways they’re much better.