Tampax’s TV ad has been banned. Get a grip, Ireland

A tampon guide has caused ‘widespread offence’. Welcome back to Catholic Ireland 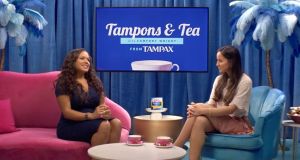 The advertisement features the host of a talkshow called Tampons & Tea asking her studio audience how many of them ever feel their tampon. When her guest, a young woman, raises her hand to indicate that she does, the host tells her that she shouldn’t and that it might mean her tampon is not in far enough. “You gotta get ’em up there, girls!” the host says. The ad then shows how to insert a tampon correctly – “Not just the tip, up to the grip!”

Ads showing women rollerblading in white leotards on the first day of their periods are far more offensive than this one. And don’t get me started on the ones that substitute an unidentified blue liquid for blood

So what’s the big deal? The ASAI has prohibited the ad from being shown again in its current form after it received 84 complaints. The authority rejected claims that it demeaned women, was unsuitable for children and contained sexual innuendo, but it did accept that the advert caused widespread offence. Catholic Ireland, how are you?

Procter & Gamble, which makes Tampax – and in the United States is using Amy Schumer to talk about tampons and vaginas – says the ad was created in response to findings that suggested 42 per cent of women who use applicator tampons do not insert the applicator correctly and that 79 per cent experience discomfort while wearing tampons. So people clearly require more guidance, particularly as this isn’t a topic necessarily taught in schools or spoken about at home. Hence the need for “You gotta get ’em up there, girls!”

Some viewers told the ASAI they found the messaging in the Tampax ad, which is for its Pearl Compak range, “provocative” or “suggestive”. I’d say it’s refreshingly plain-speaking and informative, as well as a welcome alternative to traditional menstrual-product advertising. Ads showing women rollerblading in white leotards on the first day of their periods are far more offensive than this one. And don’t get me started on the ads that substitute an unidentified blue liquid for blood.

We have tiptoed around the subject of periods for far too long. We have spoken euphemistically about “the time of the month” or “Aunt Flow”. We have walked around offices with tampons shoved up our sleeves because God forbid somebody suss out we’re on our period.

And while great strides have been made in normalising the discussion around periods, the ASAI’s decision to pull the Tampax ad in its current form is an unwelcome throwback to old Ireland. It sends the message that periods are something to be ashamed of and helps perpetuate the stigma that still surrounds them.

The ASAI noted that the ad “provided factual information in a manner that was neither explicit nor graphic”. So why ban it to placate 84 offended viewers? We should be working to ensure that girls and young women understand their bodies and the products they use.

Because there’s nothing vulgar or dirty or offensive about periods. They are a normal and healthy part of life for more than half the planet. We should be able to discuss them freely, without fear of being censored. For those who disagree, here’s a tip: get a grip.