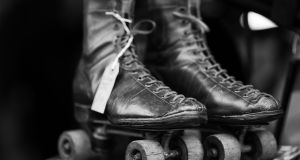 “The rink has been frequently attended by fashionable crowds, and all agree that the floor is the best they have ever used.” Photograph: iStock

If you were to pick the decade when rollerskating was at its peak in Ireland, what would you guess? A 1960s-inspired love of Americana? A 1970s’ trend? Or a classic 1980s’ pastime? Well, the Irish love of rollerskating actually goes much farther back.

In 1909, a story about three new rinks for Dublin filled almost two columns on page four of the newspaper, a sizeable amount in a text-dominated format. “Votaries of the graceful art of roller skating will not be able to say this winter that their pastime has not be adequately fostered,” the story began, “In addition to the rinks at present open, three large buildings are being got ready within the Dublin area. These will be open in the course of a month or so, and, with them in full swing, we should indeed be a rinking community without peer. Whether the good old-fashioned form of the Terpsichorean art will, as a consequence, become obsolete is a matter of grave doubt. The art is possible – it is, indeed, delightful – on roller skates, and it may be that we shall have full-dress balls and cinderella dances at which all votaries of the dance will go their merry way on rollers.”

These three rinks were privately developed and built “by Dublin artisans”. First up was the Olympia Rink – “the most fashionable resort of its kind in Dublin.” The Olympia Rink was actually a conversion job of the Great Hall at the RDS in Ballsbridge. The old floor was removed, and a new one laid with thick carpet felt, and hard maple on top of that. When it opened, this rink was the second largest in Ireland and the United Kingdom combined, the only bigger one being the Olympia in London. A live soundtrack to skating was provided by a military band.

The second rink was a refurbishment of the asphalt rink at the Rotunda Gardens, “which so long ago as 1874 was a centre of great attraction to the residents of the north side of Dublin”. That rink was updated with a new steel framework, 260ft-long, and 100ft-wide. The entrance to the rink was on Cavendish Row. “The floor manager of the new rink will be Albino, who is well known to many in Dublin as ringmaster to Hangler’s Circus,” the report read. “Albino is now a ‘skatorial’ artist of high reputation, and is at present giving exhibition performances in a Berlin rink.”

An interesting match will take place at Rotunda Rink on Saturday night, when teams representing Munster and Leinster will meet

The third rink due to open was the Palace Roller Rink in Rathmines, opposite the Town Hall. In describing the rink which was due to open three weeks after the publication of the article, the reporter wrote: “Entrance is obtained through a fine arched gateway, which is flanked with offices, two massive towers at each end dominating the front elevation. Passing through the archway the great skating hall presents a bright and imposing appearance. Around the sides are raised galleries for spectators.”

In February 1911, a notice appeared in the newspaper detailing an upcoming interprovincial match of “rink hockey”, showing how seriously some took the activity. “An interesting match will take place at Rotunda Rink on Saturday night, when teams representing Munster and Leinster will meet. A good exhibition of the game is anticipated, as most of the best players in the two provinces are taking part. Ordinary skating can be indulged in both before and after the match.”

An advertisement in December 1909 outlined opening times for other rinks in the city, including the Earlsfort Terrace Skating Rink and the Kingstown [now Dún Laoghaire] Pavilion Skating Rink. The Rotunda Rink proved extraordinarily popular, as per this report, December 14th, 1909: “This rink, which has enjoyed great popularity at the afternoon and evening sessions since the opening day, continues its unabated success. During the past week the rink has been frequently attended by fashionable crowds, and all agree that the floor is the best they have ever used, and, being practically noiseless, the band can be heard plainly at all portions.”

Besides a place for skating and parties, the Rotunda Rink occupies an important part in Irish history. It was here, in November 1913 during the Dublin Lockout, that the Irish Volunteers were launched publicly. At the time, the Rotunda Rink was the biggest hall in Dublin, and about 5,000 people packed into the hall that night on November 25th. Speakers at the gathering included Eoin MacNeill and Patrick Pearse. In the aftermath of the 1916 rising, the GPO temporarily relocated to the Rotunda Rink, using the large steel and wooden structure as a sorting office.

On November 5th, 1922, in the midst of the Civil War, a group of men entered the Rotunda Rink with tins of petrol, saturated the floor, and set the place on fire, turning the building into, as The Irish Times reported at the time, “a mass of smouldering ashes and twisted ironwork”.

The Old Guard: Charlize Theron is the most potent woman action star of our time
8