Westmeath was a hotbed of ‘leprechaun’ activity in 1908

The Way We Were: A mysterious entity in a red coat was ‘observed for some days’ 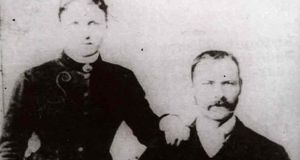 A report in the newspaper on April 20th, 1908, began mysteriously: “In North Westmeath, especially Delvin district, an odd story was told on Friday. It runs that a strange creature has been observed for some days in the district of Killough, which is between Killucan and Delvin. Several persons, mostly children from the school, are reported to have seen it, and they describe it as a little creature resembling a man of dwarfish proportions, clad in a red jacket, and suiting the traditional description of a leprechaun.”

The report went on to detail a peculiar aspect of the case (if the purported sighting of a leprechaun wasn’t enough): “As soon as one of the school children called the attention of a comrade to the creature the informant ceased to see it, whilst the informed could clearly observe it.” The report proposed that the “creature” may have been an escaped monkey, “However, the more fanciful are inclined to invest it with a far more mysterious and uncanny character.”

It would be easy to disregard a short report of this nature as a kind of early-20th-century “… and finally” clipping, or something to be filed under bizarre or unusual news briefs, were folklore and superstitions still very much embedded in the Irish psyche at the time.

Folklore-centric stories appeared in the newspaper throughout the 1890s in various forms, primarily feature articles about storytelling or local history. A feature on the folklore of Co Down in the newspaper on June 16th, 1894, showed that beliefs were evolving: “Twenty years ago the popular belief in fairies, leprechauns, and other beings of that mysterious order was profound; and I very much doubt whether, although the schoolmaster has been extensively in evidence in rural districts since then, any substantial statement of that belief prevails,” the author wrote, before detailing the familiar tale of a farmer wronged by fairies after he cut down an elm tree on a rath.

Yet less than a year later, superstitions spilled over in a horrific incident that plunged the country into shock. In March 1895 Bridget Cleary was killed by her husband Michael at Ballyvadlea in Co Tipperary after he accused her of being a changeling, believing his actual wife was kidnapped by fairies and replaced. Bridget died after being burned by her husband, leading her to become known colloquially as the last witch burned in Ireland. Bear in mind this happened more than 200 years after the Salem witch trials in the US.

The newspaper’s court reports on the sensational case are filled with horrific details of Bridget’s death. Also unnerving is some of the analysis that followed. Bridget was killed in March, and on April 13th, an article titled Irish Witches, Spells, and Charms, with the byline of “An Irish woman” gave some context to the manner in which she was killed.

“The procedure in the case of Bridget Cleary was exactly that supposed to be used in the case of fairy changelings. To hold the changeling above the fire on a shovel, or to thrust a red stick down its throat, is the drastic method proposed in the old stories of changelings; yet there is no record of such things being done.” The article went on to question other superstitions: “The Clonmel horror for the moment makes our innocent superstitions guilty. Are we, then, to do away with our fairies, our banshees, our leprechauns? The leprechaun, or fairy shoemaker, belongs as much to the autumn fields as the chirping grasshopper.”

An article in the same edition cautioned against generalisations: “It is as grotesquely unfair to assume that any considerable section of the Irish peasantry are plunged in barbaric superstition because a ghastly performance was recently engaged in a remote Tipperary glen, as it would be to hold that Eastenders are devoured by a demoniacal thirst for blood because Jack-the-Ripper figured amongst them.”

Yet more than a decade later, as seen with the Westmeath report, superstitions were alive and well, and children saying they saw a leprechaun in a red jacket remained worthy of news coverage.

Sixteen Irish panto productions for all the family to watch this season
You Exist Too Much: A provocative and insightful debut