The Swords school that had the first school computer in Ireland 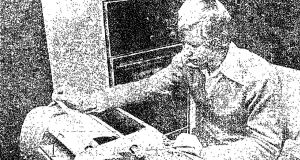 Aidan Scanlon (16) trying to calculate the shape of Q molecule on the computer in the science laboratory at Coláiste Choilm CBS, Swords, Co Dublin

Monday, May 19th, 1975
This year sees the 50th anniversary since since the first message was sent between two computers on a net of sorts. It happened at UCLA in 1969, and is colloquially called “the birth of the internet”, although that inception is debated and can technically be attributed to many incidents. The first message on Arpanet, the precursor to the internet, was sent by Charley Kline, a student, supervised by Leonard Kleinrock, an influential computer scientist. In an attempt to send the text “login” between two computers – the SDS Sigma 7 in UCLA to the SDS 940 in Stanford – the system was overwhelmed and crashed before it could complete the message, sending only the first two letters. Thus, the first message sent on the internet’s precursor was the oddly poetic “lo”.

Less than six years later, on Monday, May 19th, 1975, details of a technological revolution in education made a short news story in The Irish Times under the headline “Swotting up on computer studies”. The article heralded that “Coláiste Choilm, run by the Christian Brothers in Swords, has become the first second-level school in Ireland to own its own computer with the recent purchase of a digital machine from a Galway computer firm”.

The school was founded by the Christian Brothers in 1967, so its progress to becoming technically literate was swift. Coláiste Choilm was ahead of the curve. “Two years ago,” the report reads, “it became the first Irish secondary school to teach computer studies to its students.” The report also laid out a lofty intention: “Now with the aid of its new computer, the school is training 200 of its students in the new science, and teachers there are predicting that the Swords initiative will within the next five years lead to the Department of Education introducing computer studies as a subject on the Leaving Certificate course.”

That prediction turned out to be incredibly premature. Last year – yes, 2018 – then minister for education Richard Bruton announced that students would do the first Leaving Cert exam in computer science in 2020. Last September 40 schools began teaching the subject. The exam is also set to be the first to take place through online assessment. Progress, but a bit of a lengthy hop, skip, and jump from 1975 all the same.

A photograph of the computer appeared in the newspaper in January 1979 as part of a report on the Young Scientist Exhibition, with a student, Aidan Scanlon, then 16, using the computer to try to calculate the shape of a molecule.

The pedigree of learning at Coláiste Choilm continued to feature in the Young Scientist competition. In 1984 student Eoin Walsh won for his “Simulation of Drude electron theory and kinetic theory of gases” project, before going to Trinity College to study physics, in which he then gained a PhD. Walsh went on to become a vice-president at Morgan Stanley, then moved to Lehman Brothers, and is now at Barclays.

These days the backlash to providing school students with expensive technology is growing, along with the difficulties teachers face in wresting phones from students and keeping a lid on bullying across social media. But in more innocent times, we can thank a school in Swords for being ahead of its time, and ushering in a future very few could have predicted, not least the Department of Education.

‘How can we torment a bunch of millennial snowflakes and get away with it?’
7