New horse museum to put Fethard on the tourist map 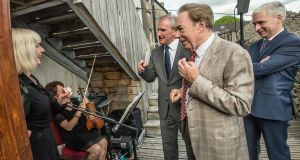 One of the country’s most important walled towns, which has a long association with horseracing, now has a landmark visitor attraction to commemorate its heritage.

Housed in a 400-year-old building which has previously been home to a courthouse, a fire station, a scout unit, and even discos and pantomimes, the museum is the product of a €1.6 million investment seeking to bring to life both the local history and the evolution of Ireland’s world-class bloodstock industry.

Fethard is the nearest town to the world-famous Coolmore Stud, and the Magnier family are among the private donors to the museum, while public funding came from Fáilte Ireland, Tipperary County Council and the Leader programme.

The idea for the project came from the Fethard Business and Tourism Group, whose chairman Jimmy O’Sullivan said: “Fethard, like many towns across rural Ireland, was hit quite badly by the recession. [We] looked for ways to regenerate the town and with the involvement and support of the local community came up with the idea to establish a museum and position the town as a tourist destination.”

The museum includes an interactive exhibition which has, among its many attractions, the skeleton of multiple horseracing champion sire Sadler’s Wells, the horse which did much to elevate Coolmore Stud to where it is today.

Developers of the state-of-the-art museum were Event Communications, who also have the Titanic Belfast, the Guinness Storehouse and EPIC at the CHQ building in Dublin in their portfolio.

“Fethard is the most important medieval small walled town in Ireland and this state-of-the-art visitor attraction enhances Fethard’s wonderful tapestry and makes it an unmissable stop on Ireland’s Ancient East,” Mr O’Sullivan said.

Other attendees at the opening included champion trainer Aidan O’Brien and Alice Leahy, Fethard native and director of the Alice Leahy Trust who has worked with the most vulnerable in society for many years.

Lloyd Webber, who owns nearby Kiltinan Castle, described the museum as “an extremely welcome addition” to Fethard.

“The town hall has been lovingly restored and it is the perfect canvas to showcase Fethard’s rich history. Through Kiltinan Castle Stud my wife and I feel a close affinity to the horse culture which is an intrinsic part of this area.”

When he first arrived in Fethard 25 years ago Lloyd Webber was “blown away” by the town and its people, he said, paying tribute to the dedication and work put in by everyone involved in the Horse Country Experience venture. The trustees of the Andrew Lloyd Webber Foundation awarded a one-off grant towards the employment of a museum curator.

Ireland’s industrial heritage: the past you might not know we had
6