The Times We Lived In: Looks like I picked the wrong week to quit sniffing glue 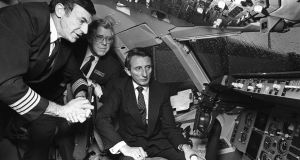 The published caption was: Photograph shows the Minister for the Public Service, Mr John Boland, in the cockpit of the British Airways 757 at Dublin Airport yesterday. Also included are Capt. Chris Cowper (left) and Mr Alan Douglas, manager, British Airways, Republic of Ireland

At this column, the sight of politicians in unexpected places has often made us smile. But there’s an awkwardness about this particular image which suggests that a minister in the cockpit is, when you get right down to it, about as welcome as a tarantula in the bath.

The occasion was joyful enough. At 9.10am on November 10th, the biggest aircraft ever to have flown the Dublin-London route to that date – a British Airways Boeing 757 with the capacity to carry 189 passengers as well as boasting 1,800 cubic feet of luggage, mail and cargo space – touched down after its first scheduled flight.

It must have seemed the perfect excuse for a spot of party political spin. But someone should have told the then minister for the public service, John Boland, that he was supposed to twinkle genially at the camera, not look like Dracula at a wake – and certainly not fiddle about with buttons whose functions are way, way beyond his aeronautical abilities.

No wonder the real pilot, named as Capt. Chris Cowper (left) and the man with the glasses, who is Alan Douglas, the manager of British Airways’ Irish operation, appear to be somewhat uneasy about their high-class visitor.

Mr Douglas is attempting a smile, but it has strayed off course and become a grimace. Capt. Cowper is either wringing his hands, or trying desperately hard to prevent himself from knocking Mr Boland’s hand from his knobs.

Maybe they’re just trying to figure out how to switch on the windscreen wipers – always a conundrum, when you sit down at the controls of a new vehicle, and to judge by the amount of rain on the windows, it’s a particularly nasty November morning.

No, wait: maybe they’re recreating a scene from a famous movie of a few years’ vintage.

Capt. Cowper: “Can you fly this plane and land it?”

Mr Boland: “I am serious. And don’t call me Shirley.”

These and other Irish Times images can be purchased from: irishtimes.com/photosales. A book, The Times We Lived In, with more than 100 photographs and commentary by Arminta Wallace, published by Irish Times Books, is available from irishtimes.com and from bookshops, priced at €19.99.