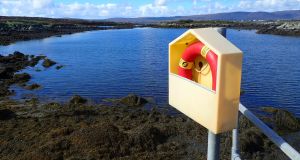 Why did the Irish starve during the Famine when surrounded by such an abundance of fish, shellfish and sea vegetables? This question often gets asked in a tone that seems to cast doubt on the abilities and even the intelligence of those who suffered.

In The Broken Harp, Tomás Mac Síomóin quotes the descendent of a coffin ship survivor in New York as saying, “The Great Hunger occurred because the Irish who lived on coasts, God love (and help) them, were so inefficient, lazy and shiftless that, when the potato crop failed, well, the poor unfortunate divils, they weren’t even able to learn to fish.”

It’s a classic trait of post-colonial oppression to blame yourself for the injustices inflicted on you by others. Our colonised minds have been programmed to believe that we were somehow at fault, rather than acknowledging the fact that our ancestors had no access to this coastal bounty, because the ruling classes controlled the ports and fishing licenses, and years of poverty meant boats had been sold off.

If proof was ever needed of just how wide, deep and nuanced our forefathers’ understanding of the resources along our coastline was, take a look at our language. The abundance of words to describe every conceivable element of sea life is staggering. There are literally dozens of terms for different types of waves, winds, seaweeds, shellfish, and fishing conditions. The sheer specificity of some, such as boilgeadán, a young coal fish, about five inches long, or luiseag, the back of a fish hook that is grabbed to remove the hook from a fish’s mouth, is bewildering to us who are now disassociated from this great storehouse of accumulated wisdom.

The fact was most clearly brought home to me during a journey I made last year along the western seaboard of Donegal, Mayo, Sligo and Galway, gathering sea words and coastal terms from local fishermen and folklorists. The phrases and terminology that I was given made clear just how profound our understanding of coastal ecosystems and sea knowledge had become, after millennia of accumulating and sharing knowledge within communities.

In each county, and even on isolated promontories, peninsulas and islands within counties, I was offered an abundance of highly specific words that revealed particular aspects of the marine ecosystems, weather patterns, fishing practises and sailing techniques in those areas – as well, of course, as highlighting the diverse beauty of the natural world.

For example, Crom’ubhán is a long stick with a hook on it used to lure crabs out of their underwater rock holes at very low tides, while léamhadóir refers to a man who watched for signs to work out where the herrings were, and who would then light a piece of paper and throw it on the water so that his crew could make a ring around the shoal with their nets. Muirleadh describes the act of chewing up small green crabs and spitting them into the sea as bait to attract fish to the boat, while buailteog is a shaft, or ray of light, on the wrong side of the sun that is regarded as a sign of bad weather approaching.

Words like these make clear just how attuned our forefathers were to the diversity of nourishment and resources along the coastline. The hunger during the Famine years was not a result of ignorance or laziness. In fact, there are accounts of coasts being picked bare of every type of seaweed by the starving victims who were denied access to the great stockpiles of grain, butter and other foods that were produced in the country for export at the time.

In each coastal region people pointed out to me the local bráití, areas of deep ocean where the wrasse tend to gather under the kelp. Long before the invention of eco-sounders, the old folk knew the whereabouts of each of these rich fishing grounds and were able to manage them sustainably, so that if a boat was fishing on a specific bráite, others would move to a different one.

But, what should we do with all of these little-known words now? Certainly the insights and timeless perspectives contained in some of them will be useful as we grapple with coastal erosion and climate change, and as we begin to depend more on local species of fish and seaweed rather than importing them from South East Asia and South America. As a stop-gap measure I’ve recorded 250 of these words on a website (www.manchan.com/sea-tamagotchi) as part of a Galway2020 projected titled Sea Tamagotchi. Each word has an accompanying image and audio explanation by the fishermen who shared them. There are also 15 short videos that convey the meaning behind the words, and a handmade book by Redfoxpress that illustrates 38 of the words. As part of St Patrick’s Festival the words will be projected onto walls throughout the city of Dublin during the week of St Patrick’s Day, and COLLECTIVE Films have made a short documentary about some of the fishermen and folklorists that I visited which will air on TG4’s educational channel, Foghlaim.

These are really only token gestures that hint at the vast resources available. Ultimately, what happens to this vast and profound inheritance that has been built up and passed down by our forefathers is in our hands. It’s our birth-right; and whether we pass it on as a precious heirloom or let it dissipate and die is up to us.

Stopóg (Stup-owg)
Shallow, rocky seabed out beyond where the smaller seaweed grows. Rockfish and lobsters thrive here. Also a stump of cabbage. A slovenly woman.

Scian Coirlí (Skee-yen Kore-lee)
A three-bladed knife on a 16ft long pole, used in conjunction with the pike for gathering kelp. Neither has been used for 80 years, but their memory lives on.

Leachta (lyak-thuh)
Stacked flagstones on the shore used long ago to support a boat while loading it with seaweed. Also graves, memorial mounds and paving.

Strapa ballachaí (Strop-eh Bollokey)
A ring of rope with up to thirty ballan wrasse strung up through their mouths on it. A way of carrying the day’s catch home.

Tápholl (Taow-ful)
Calmness between two changes of falling or ebbing tide. Unsteady water when currents meet and are about to change direction.

Coinnic (Kun-nick)
A dangerous, churning whirlpool between two strong currents. The sea can drop up to 3 metres at such points.

Súitú (Suet-two)
The sucking-out sound of the shoreline at night. Often heard in springtime when large waves pull the pebbles from the shore, then roll them back in.

Stranach (Stron-ekh)
The whistling or murmuring of the sea in a cove when the water rushes in and is then pulled out again.