Latest release of new Irish whiskeys are well worth trying

From Teelings to Dingle Distillery to Midleton and more, some of these will sell out very quickly 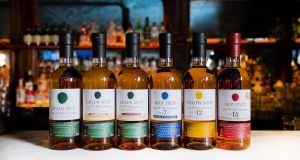 Around this time of year, there are always plenty of new Irish whiskies released to capture the Christmas gift market. Here is a round-up, but don’t delay, some will sell out very quickly.

I have already covered The Liberator Batch 2 (€65); Double Port Finish (€50); Teelings Renaissance Part Two (€140) ; The Celt An Chéad Bhlás (€75); and the Irishman Founder’s Reserve Oloroso Cask Finish (€75). All are still available and worth buying.

Dingle recently released around 8,000 bottles of their Fourth Single Pot Still Whiskey, priced at €95 per bottle, half of which will be exported. Deeply flavoured with figs, raisins and dark chocolate, this would make a great Christmas whiskey. At the same time, a further 500 bottles of Pot Still Cask Strength have been released, a first for Dingle Distillery, for €350 a bottle.

Midleton launched the 38th edition of Very Rare, the last produced by distiller Brian Nation. His place has been taken by Kevin O’Gorman, a man with 22 years experience in Midleton. The Very Rare 2020 (€180) is elegant and smooth with the complexity one expects from this whiskey.

Following Green Spot, Yellow Spot and Red Spot, the final in the series, The Mitchell & Son Blue Spot (€80) has been released. Aged in bourbon, sherry and Madeira, this seven-year-old cask-strength whiskey is brimming with tropical fruits and spice.

James Fox is offering a single cask Midleton Very Rare Pot Still Irish Whiskey, exclusively through their store and website. Laid down in 1998, 162 bottles were made, available for €995 a bottle. As you would expect, it is a magnificent complex whiskey.

Roe & Co released the second edition of their Cask Strength; the 2020 edition (€74) is a richly flavoured smooth 13-year-old single malt Irish whiskey. Bushmills still have stocks of their Causeway 1995 Malaga Cask (€400). Lastly, Lough Ree Distillery mark the closing of Lanesborough peat-fired power station on December 18th, with the release of two very limited edition peated whiskeys, The Station and Mountdillon, both €65 a bottle from celticwhiskeyshop.com and lrd.ie.