The Times We Lived In: Published Thursday, April 8th, 1926 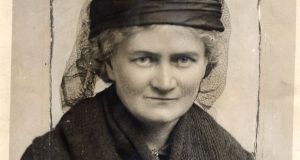 Violet Gibson, daughter of the first Lord Ashbourne, of Co Meath, who wounded Signor Mussolini with a revolver in Rome.

Violet Gibson was 50 years old when a shocking story about her became front-page news in Ireland in 1926. Gibson had appeared in The Irish Times many times before, mostly in the Court and Fashion notices, or in the Fashionable Intelligence column, the natural home for the daughter of Lord Ashbourne.

“Hon Violet Gibson was becomingly dressed in a grey canvas costume and a black hat,” a report from the Horse Show in Dublin detailed in August 1899. Another social column from a wedding in July 1904 also praised Gibson’s style, “The Hon Violet Gibson wore a most striking toilette of deep-rose crepe de chine, the skirt very gracefully accordioned, and the same colour adorned her black tulle hat.”

In May 1905, the Fashionable Intelligence column reported on a recent trip, “The Hon Violet Gibson has greatly benefited by her stay at Davos. She has now joined her father, Lord Ashbourne, in London.” Then a curious story from Rome, printed in the newspaper on March 2nd, 1925: “The Hon Violet Gibson (sister of Lord Ashbourne), who was staying in a pension in Rome, is lying in the hospital of San Giacomo, suffering from a serious wound. On Friday a shot was heard in her room, and when people entered she was found in bed wounded. She simply said that she wished for a confessor to be called. The doctors at the hospital found that the shot had passed through the ribs and penetrated deeply. Although they do not despair of saving her life, they consider that her condition is most grave.”

A note was added in square brackets to the story, “[Miss Gibson, who is 49, arrived in Rome last December for the Holy Year celebrations. She spent most of her time in private prayer and attendance at church Services.]”

Gibson’s attempted suicide preceded an even more dramatic event. Just over a year later, on Thursday April 8th, 1926, a headline screamed from the page, “Attempt to assassinate Mussolini. Shot at in front of cheering crowd: Wounded in the nose. Irish woman arrested.”

The report detailed what had unfolded: “The Italian Prime Minister, after opening the International Surgical Congress in the Capitol, was passing through a cheering crowd in the square to his motor car, when ‘an elderly woman in dark clothes’ (afterwards identified as Hon Violet Gibson) dashed out and fired a small revolver almost point-blank in his face. The bullet perforated the nostrils; but, according to an official bulletin issued later, ‘the wound is not serious’. Signor Mussolini remained self-composed, reassured his entourage, and, while pressing a handkerchief to the wound, gave orders that no reprisals were to be carried out against his assailant, who had been arrested. She was protected by police from the fury of the crowd, who tried to lynch her. She was carried to the police station by politics and carabineers.”

A small bottle of poison was also found in Gibson’s pockets. The following day, an interview with her sister, Constance Gibson, was published. Her sister traced the “alarming trait” Gibson had developed to the death of their brother, Victor ,who was, according to Constance, “found dead, whether by his own hand or that of somebody else, has never been cleared up to our satisfaction. Violet, losing her playmate of her life, gave way to paroxysms of grief, which in the end unhinged her mind… Violet was always a girl of extremes… She was cultured, clever, and artistic. She was musical and had a most beautiful voice, though she would never sing except in private. The dominating influence of her life was her love of Victor. His death was to her the last straw.”

With the current ascent of fascistic and far-right individuals and movements in Britain and America, the debate around how to confront fascists – whether to punch them (Richard Spencer) or throw milkshakes on them (Tommy Robinson) – has also become part of discourse. But an Irishwoman’s attempt to assassinate Mussolini is often overlooked in history.

Gibson left Italy for England in May 1927, and she spent much of the rest of her life at St Andrew’s asylum in Northampton where, from 1951, James Joyce’s daughter, Lucia, was also a patient. Gibson died in 1956, Joyce in 1982.  Today, Gibson’s story is finding new audiences. The RTÉ radio documentary, The Irishwoman who Shot Mussolini, won an award at the New York International Radio Programme Awards in 2015. A drama documentary staring Olwen Fouréré is in production, and the Cavan songwriter Lisa O’Neill told the story through song on the track Violet Gibson on her recent album Heard a Long Gone Song.