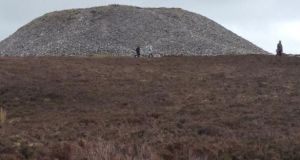 One of Sligo’s best-known landmarks, reputed to be Queen’s Maeve’s grave, on the summit of Knocknarea, is being put at risk by increased volumes of walkers who climb the cairn, according to local archaeologists.

The Office of Public Works has confirmed that it has concerns for the long-term protection and preservation of the Neolithic passage tomb, a national monument. A motion before Sligo County Council on Monday is urging that measures be taken to protect the site.

Archaeologists have warned the cairn is eroding because many people climbing the mountain proceed to climb it as well, despite signs urging them not to do so. Some climbers also remove stones from the cairn which is exacerbating the problem.

Archeologist Dr Stefan Bergh who lives at the foot of Knocknarea, and who has been researching sites on the mountain for more than 30 years, said the problem was worsening because of increased traffic. In 2015 Sligo County Council constructed a new route to the summit, the 2.4k Queen Maeve Trail, which complemented a traditionally shorter trail. Last year the trail was extended to form a loop, which is expected to attract up to 100,000 walkers annually.

Dr Bergh, director of the postgraduate programme in Landscape Archaeology at NUIG, said the main problem was that many people using the old route go straight up onto the cairn but they don’t walk down the same way. “They walk all over the place. That creates erosion on all sides”.

He said while it was good news that access to the mountain had improved, more information must be provided for those visiting the cairn.

“I have been concerned for a very, very long time. Something has to be done,” he said.

He said some signs had been erected on the summit warning people not to climb the cairn but these said “danger” which was “sending out the wrong message” as the danger was to the monument rather than to walkers.

Dr Bergh said a simple solution such as a rope around the cairn would probably deter 90 per cent of those who climb to the top of the cairn.

He said more information boards should also be erected to let people know about the significance of the 5,000-year-old cairn which “has no match in Ireland”.

“There are still people going up there who don’t realise that it is a man-made cairn,” he said.

“It is one of the most enigmatic statements from prehistoric Ireland. It’s visibility makes it mind-blowing.” IT Sligo archaeologist Dr Marion Dowd echoed his concern and said the problem had worsened considerably in the last 10 to 15 years. “It is getting smaller. People have been removing stones. And then people climb to the top of the cairn to get a better view”.

She said this was destabilising the monument and causing erosion.

A motion from Sinn Féin councillor Chris MacManus for Monday’s council meeting urges the local authority to engage with the OPW to provide long-term measures to protect the monument and “maintain its integrity as a place of significant archaeological, historical and tourist significance.”

The OPW said pictogram signs indicating “no climbing” and “no removal of stones” had been erected at various locations on the National Monument site. “Unfortunately a number of these signs are regularly damaged, vandalised and in some instances removed totally”.

The agency said it had concerns for the long-term protection and preservation of the cairn which was “widely promoted in the press and print media as a site to visit and climb, without any caveats to the impact on site”.

A full laser scan of the site was undertaken before Christmas with a view to planning a works programme “mindful of the available resources”, it added.