Fintan O’Toole: The first murky, inglorious shots of the War of Independence 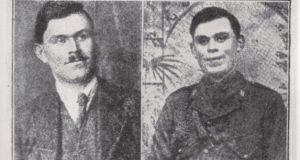 Soloheadbeg is not much of a place, though most Irish people have been close enough to it at some stage; it is about a mile from Limerick Junction.

In 1919, by far the most famous living native of the place was Sir Michael Francis O’Dwyer, the son of local farmers who had risen to be Lieutenant Governor of the Punjab. Later in the year, he would retire from that high imperial office, blamed in part for the mass killing of unarmed Indian protestors at Amritsar.

But on January 21st, Dan Breen, waiting in ambush on the by-road from Tipperary town to the quarry at Soloheadbeg, imagined the place rather differently, evoking in his imagination the epic history of the land around him: “In this plain, dominated by the Galtymore mountains, Brian Boru and his brother Mahon fought their first great battle with the Danes in 968.”

In Breen’s mind what was about to occur here would be another “first great battle”.

“We were to begin another phase in the long fight for the freedom of our country.”

At around 12.30pm, eight masked IRA men waited on a one-and-a-half metre-high bank screened by whitethorn and briar. Forewarned by a scout, they stopped a small convoy coming from Tipperary town.

It was made up of a heavy cart carrying gelignite for the quarry, driven by a local man, James Godfrey, accompanied by a county council official Patrick Flynn and guarded by two armed constables of the Royal Irish Constabulary, James McDonnell and Patrick O’Connell. Both were Irish Catholics.

McDonnell, who was 56, was a native Irish speaker from Belmullet, Co Mayo, and was the widowed father of seven children. O’Connell, who was 30, was from Coachford, Co Cork, and was engaged to be married. Both seem to have been well-regarded in Tipperary.

According to Breen and other members of the IRA party, the two policemen were warned to put their hands up but instead “raised their rifles” and were consequently shot dead. One of the IRA men, Patrick O’Dwyer, recalled that “the whole thing happened very suddenly, in less, perhaps, than half a minute, and in much less time than it takes to relate”.

Yet that half-minute and those two killings came, largely through Breen’s vivid memoir My Fight for Irish Freedom, to be memorialised as the beginning of the War of Independence.

If so, it was a strange, murky and inglorious beginning. The IRA’s commander on the scene, Séamus Robinson, later called the ambush “the accidental starting point of what later became known as the ‘Tan War’” – the idea of an accident being very much at odds with Breen’s narrative of a consciously epic moment.

There was no significant violent action by the IRA for another two months, suggesting that it was at best a false start.

In retrospect, Soloheadbeg was shaped as a mythic point of origin. In reality, it looks more like a local coup – not against British rule but against those in Sinn Féin who favoured a nonviolent path to Irish independence.

Sinn Féin had won a majority of seats in the historic election of December 1918. Its manifesto had reserved the right to use “any and every means” – a deliberately slippery term – but specified only the peaceful ones of establishing an Irish parliament and using its democratic mandate to seek a hearing for Irish independence at the Versailles peace conference.

The first Dáil met for the first time on January 21st, 1919 – the same day as the ambush at Soloheadbeg. The coincidence makes it seem as if the two events were joined as the twin prongs of a dual republican strategy: a Lee Enfield in one hand and a ballot box in the other.

But a co-incidence is exactly what it was. The IRA unit had expected the attack to happen days earlier, but the convoy did not arrive. There was, in republican claims, only one legitimate source of authority in Ireland at this point: the elected Dáil.

As one of its prominent members Erskine Childers put it, the Dáil was “the only authority in Ireland with the moral sanction of a democracy behind it”.

So on whose authority were the policemen killed at Soloheadbeg? Séamus Robinson, who was, with Breen and Seán Treacy, a central figure in the ambush, was commander of the IRA in South Tipperary, and though Breen was at great pains to play this down, it was in fact Robinson who led the ambush.

In his account for the Bureau of Military History, written in 1950, Robinson is quite clear that the decision to launch an armed campaign was in keeping with the general aims of “GHQ” – the executive of the IRA – but against the known wishes of both the Sinn Féin leadership and the democratically elected Dáil: “The passive-resistance policy of old Sinn Féin and the apparent policy of the Dáil was not the policy of GHQ.”

Robinson quoted approvingly from Óglach, the bulletin of the emerging IRA: “‘Passive resistance is no resistance at all. Our active military resistance is the only thing that will tell. Any plans, theories, or doubts tending to distract the minds of the people from the policy of fierce, ruthless fighting ought to be severely discouraged.’ Inference: Ruthless fighting encouraged.”

And another inference: the Dáil was a distraction from the real business of ruthless fighting. As Robinson explained it, the ambush was aimed at pre-empting the authority of the Dáil, creating a violent fait accompli that could not be gainsaid by “righteous indignation speeches of dyed-in-the-wood pacifist members” of the new Irish parliament.

In this sense, Soloheadbeg was as much a blow at the nonviolent wing of Sinn Féin as it was against the RIC or Britain. It was also, however, a defiance even of the authority of the IRA itself. Breen wrote that it was conceived because the IRA was “in great danger of becoming merely an adjunct to the Sinn Féin organisation”.

The specific proposal for the ambush seems to have come from Treacy, whose farmhouse was beside the quarry. According to Robinson, “He came to me in Kilshenane with his fiancée, May Quigley, shortly after Christmas 1918. After tea, the two of us went out to the haggard where he told me of the gelignite that was due to arrive at Soloheadbeg quarry in two or three weeks’ time – he could not find out the exact date, which was kept under sealed orders. He wanted to know should we capture it.”

Crucially, Robinson’s decision to try to do so was made without reference, not only to the elected Dáil, but even to the IRA executive: “Seán Treacy said ‘Will you get permission from GHQ?’ I looked inquiringly at Seán to see if he were serious, before I replied ‘It will be unnecessary so long as we do not ask for their permission. If we ask, we must await their reply.’”

This pleased Treacy: “When Seán was suddenly pleased with anything his quizzical eyes opened for a flash and the tip of his tongue licked the outside corner of his lips.”

But even within this tiny self-appointed group, there is no clarity about precisely what they intended to do. Specifically: Did they or did they not intend to kill the RIC men? One of the eight men in the IRA ambush party, Patrick O’Dwyer later recalled that “It was, as far as I am aware, definitely the intention to hold up the escort, disarm them and seize the gelignite without bloodshed if possible.”

Dan Breen’s account is deeply ambivalent. On the one side, he blames the policemen for their own deaths: “They were Irishmen too . . . We would have preferred to avoid bloodshed; but they were inflexible.”

On the other, he calls them “a pack of deserters, spies and hirelings” and expresses regret that there were only two policemen to kill: “If there had to be dead Peelers at all, six would have created a better impression than a mere two.”

Soloheadbeg gave sanction to a fatal belief that would remain in place for much longer; that anyone with a gun could claim the authority of the Irish republic

“The reason for the difference was that there would be so little danger to us if only two appeared that it would be inhuman not to give them an opportunity of surrendering.”

By the time the convoy arrived, Robinson and his men knew from their scout that it contained only two policemen. It seems clear that the only shots fired came from the IRA’s side, the first almost certainly from Treacy who was hidden behind a bush with a Winchester repeating rifle. When the shooting had stopped, according to Robinson, Treacy “was jubilant and danced around, he kissed his rifle and said ‘That was a comfortable place to fire from’.”

It also seems clear that many of the IRA recruits in Tipperary regarded the killings of McDonnell and O’Connell as both deliberate and shocking.

According to Michael Fitzpatrick, subsequently a senior IRA figure: “Those of us who were intimate with Treacy knew his mind was set on renewing the fight, but most were taken by surprise and took some time to recover from the shock of the shooting, deliberately, of the police at Soloheadbeg.”

It would take some time, more deaths and more indiscriminate British reprisals and repression, before most Irish republicans could metaphorically join Seán Treacy in kissing a rifle and dancing in jubilation at the deaths of fellow Irishmen.

But as they came to do so, Soloheadbeg gave sanction to a fatal belief that would remain in place for much longer; that anyone with a gun could claim the authority of the Irish republic.

The Crown and the assassination of Lord Mountbatten: fact or fiction?
7