Blow by blow: Timeline of the War of Independence 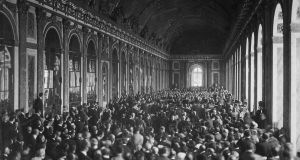 January 18th: The Paris Peace Conference opens. The tone is set early. French president Raymond Poincare declares: “You are assembled to repair the evil it has done and to prevent a recurrence of it. You hold in your hands the future of the world.”

January 21st: Two Royal Irish Constabulary officers James McDonnell and Patrick O’Connell are shot dead by men from the Third Tipperary Brigade of the Irish Volunteers while escorting a consignment of gelignite to Soloheadbeg quarry in Co Tipperary. These are the first shots of the War of Independence.

January 21st: Dáil Éireann meets for the first time in the Mansion House in Dublin. Just 27 members attend as most of the eligible MPs are in jail in England having been arrested in May of the previous year as part of the so-called German plot. The members make a declaration of independence, issue a notice to the free nations of the world and adopt the Democratic Programme.

January 25th: Delegates at the Paris Peace Conference approve an American proposal to set up the League of Nations as a means of settling international disputes and preventing another world war breaking out.

February 8th: Future Irish president Séan T O’Ceallaigh arrives in Paris hoping to get a hearing for the nascent Irish government at Versailles but he is refused.

March 4th: The US House of Representatives votes 261 to 41 for a resolution expressing an “earnest hope” that the peace conference would “favourably consider the claims of Ireland to self-determination”.

March 6th: Many of those arrested in the so-called German Plot in May 1918 are released from jail in the UK. Among them are Arthur Griffith, William T Cosgrave, Daryl Figgis and Constance Markievicz.

March 9th: A revolution begins in Egypt against British occupation. Some 800 Egyptians are killed in two weeks of fighting.

April 13th: The British Indian army opens fire on protesters at Amritsar in the Punjab, killing 379 civilians who had assembled for a peaceful demonstration in the city. The massacre was ordered by Irish-educated Col Reginald Dyer and supported by the Tipperary-born lieutenant governor of the Punjab Sir Michael O’Dwyer.

April 11th: Dáil Éireann announces a boycott of the RIC.

April 15th-27th: The Limerick Soviet is declared in the city by the Limerick Trades and Labour Council in response to draconian public safety measures in the aftermath of the O’Brien shooting.

May 13th: Seán Hogan, the youngest of those involved in the Soloheadbeg ambush, is rescued from the train at Knocklong station in Co Limerick. Two RIC constables, Sgt Peter Wallace and Constable Michael Enright, are killed while Dan Breen and Seán Treacy are injured in the attack

June 1st: De Valera departs for the United States hoping to make the case in America for an independent Ireland.

June 18th: Dáil courts are set up for the first time.

June 23rd: Det Insp Michael Hunt is shot and killed on the street of Thurles in Co Tipperary. He is the most senior RIC officer to date to be killed.

June 28th: The Treaty of Versailles is signed. Among its punitive measures, Germany loses 10 per cent of its population, is made to pay reparations, loses most of its army and navy and is blamed for starting the first World War.

September 7th: Private William Jones is shot and killed in Fermoy by the IRA, the first British army fatality since the 1916 Rising.

October 2nd: President of the United States Woodrow Wilson suffers a serious stroke and is invalided.

November 4th: The British Cabinet’s Irish committee proposes for the first time two Home Rule parliaments in Ireland, one in Dublin and the other in Belfast with a Council of Ireland to explore the option of eventually Irish unity.

November 19th: The Treaty of Versailles fails a critical ratification vote in the United States Senate. The US never becomes a member of the League of Nations as a result, fatally affecting its ability to influence disputes.

December 19th: The IRA tries to assassinate the Viceroy Lord French at Ashtown in Co Dublin. Volunteer Martin Savage is killed in the ensuing gun battle, but Lord French escapes.