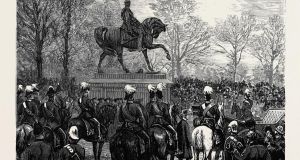 The unveiling of the statue of Field Marshal Hugh Gough in the Phoenix Park, in Dublin in 1878. Photograph: Universal History Archive/UIG via Getty Images

Attempts to repatriate the Gough statue which was blown up by the IRA in 1957 were ruled out by the government in 1988.

The statue was erected in 1878 in Phoenix Park in honour of the British commander Field Marshal Hugh Gough who rose to commander-in-chief of British forces in India.

It was sighted on the first roundabout in the park where Dublin Zoo is located and was the work of the Irish sculptor John Henry Foley.

It was persistently targeted by the IRA as a symbol of British imperialism in Ireland. On Christmas Eve 1944, vandals sawed its head off, but it was recovered and soldered back on.

However, the statue was blown from its pedestal in 1957 and never resurrected. It remained in storage at the Royal Hospital Kilmainham until purchased by the businessman Robert Guinness in 1986.

It didn’t stop several supporters of the statue calling for its reinstatement. They argued that the statue was a work of art in its own right notwithstanding its subject matter. It was one of the finest equestrian statues in Europe and at the time the only equestrian statue in Dublin.

Prime among its supporters was the architect Uinseann Mac Eoin who said he was from a “strong nationalist family”, but argued in a letter to the Office of Public Works that the statute would be an addition to our “sadly run-down capital”.

Guinness also offered to bring it back to Ireland if the conditions were right, but this was turned down by the government.

“It is the Garda view,” the letter stated, “that nothing has happened in the meantime which would placate those who would wish to harm it. In their [the Garda’s] view, the climate is worse now than at the time of the last attack on the statue in 1957.”

Laura Veirs: ‘I had a feminist awakening’
7

‘Conor McGregor is an inspiration. There’s a severe vulnerability to him’
10