‘First with a rifle, then with a shovel’: An Irishman’s Diary on the postwar battlefield clearances and burials of the Great War 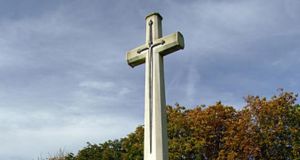 At the end of the first World War there were over 150,000 graves scattered across the old Western Front. Thousands more men lay unburied where they fell. Others had been hastily placed in shallow battlefield graves subsequently destroyed by shellfire. And then there were the missing – 300,000 men with no known grave – many of whom who would never be found.

Permanent memorials to the missing had been built or planned. Battlefields had been systematically searched and cleared. In areas of the heaviest fighting, teams of men quartered the ground up to 20 times in the painstaking search for bodies.

Such respect for the dead was something new. The “scum of the earth” who won Waterloo and the six hundred who rode into the Crimean valley of death were simply “shovelled into a hole . . . and forgotten”, as novelist William Makepeace Thackeray put it.

Although efforts were made to bury Boer War dead, neglect of their graves threatened to become a national scandal in Victorian Britain.

Not until the Great War was a concerted effort made to recover the fallen and remember the lives of all who paid the ultimate price. Even under fire, bodies were to be recovered if possible and laid to rest. “We . . . dealt with the dead by simply pulling them into depressions in the earth, or into shell holes,” wrote Lieut George Crake in 1915. “All the work had to be done on all fours, for to stand erect was courting disaster.”

Following the Armistice, such efforts took on greater urgency. Visitors – pilgrims, relatives, even tourists – were soon visiting the old theatres of war. “At Kein Zillebeke,” wrote Stephen Graham (a private in the Scots Guards who returned to visit his former battlefields in 1920), “there is an Englishwoman going from grave to grave diligently examining the aluminium ribbons on which the names are fixed to the wooden crosses – looking for her husband’s grave.” She, perhaps, was one of the lucky ones. On April 17th , 1919, WF McBeath of the Australian Infantry Force wrote in his diary: “Working in cemetery. An English lady came over to see her son’s grave, found him lying in a bag and fainted.”

McBeath was just one of many soldiers who remained in France and Flanders after the war. Though no longer in danger from enemy gunfire, their duty was dirty, difficult and dangerous. Unexploded shells and grenades littered the ground. “There are heaps of rusty Mills bombs,” wrote Graham. “Unexploded stick bombs, rusty grog bottles, helmets lie there still.”

And there were hidden dangers, too. Trapped pockets of poison gas lay buried in collapsed trenches ready to be released at the first cut of a shovel.

Decomposing corpses had to be located, exhumed and identified – “ghoulish work”, Graham called it – before being reburied with dignity and honour. “I can’t say I’m exactly in love with the job,” McBeath wrote home to his mother. “I’d rather be in the cemetery digging graves. It is terribly hard ground but it’s a clean job.” Even when only a fragment could be found – and even when a body or a fragment was beyond identification – a grave would be dug and a headstone erected. But for some relatives of the deceased, that was never going to be sufficient.

Capt William Arthur Durie of the 36th (Peel) Regiment of the Canadian Infantry had been killed by mortar fire near Lens in 1917 and his body buried at nearby Corkscrew cemetery. Following the Armistice it was moved to the concentration plot at Loos-en-Gohelle. But that was not far enough for Capt Durie’s mother. In July 1926 a War Graves Commission gardener found that the soil on Capt Durie’s grave had been disturbed. In circumstances still shrouded in mystery, Anna Durie had taken her son’s body back to Canada, where it was reburied in the family vault in Toronto.

It was by no means the only incident of its kind. At one stage the War Graves Commission was receiving over 90 letters per week demanding repatriation. But the commission, which Anna Durie referred to as “the most tyrannical and autocratic body of men”, remained firm. The fallen were to be buried where they fell, and “some corner of a foreign field” to be their final resting place.

Those foreign fields still yield fresh corpses every year. And, in line with the huge respect now paid as a matter of course to a man’s mortal remains, the dead are buried in the war cemeteries with full military honours. Among the latest, in November this year three unknown soldiers whose remains were discovered during road works near Passchendaele were laid to rest at Tyne Cot, the largest military cemetery on the Western Front.

They won’t be the last. It is estimated that up to 30 new discoveries are made each year. The missing – some of them at least – are slowly being found and their remains buried with the respect and dignity they deserve, in a century-old tradition begun by the men who served their country “first with a rifle, then with a shovel”.

The Glorious Dead, by Tim Atkinson, is published by Unbound