House of The Dead: What to do with Joyce’s literary landmark?

If the core and front of the house are safe, does it matter what else gets built around it? 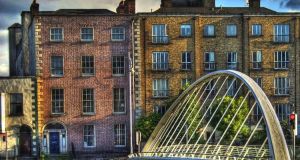 On a freezing cold winter’s night in 1987 I was dancing by myself on the first floor of a derelict squat at the wrong end of Dublin’s quays. Debris, drug paraphernalia and human waste had been cleared away and large movie lights set up at the windows. Outside, cameras rolled as a horse-drawn hackney pulled up and two figures dressed in Edwardian clothes made their way to the door.

The sequence was designed to match scenes already filmed in a California studio of Gabriel and Gretta Conroy, played by Donal McCann and Anjelica Huston, entering the home of the Misses Morkan at 15 Usher’s Island for the opening of John Huston’s film version of James Joyce’s The Dead.

My task was to cast moving shadows on the net curtains to give the impression of warmth and conviviality where in reality there was none. Everyone working on that shoot probably thought they were memorialising a building that would soon be gone.

No 15's history embodies that of Dublin’s inner city. Built by Georgian merchants, immortalised by a great writer, left to decay, saved at the last moment, and set to become yet another leisure facility for city-break visitors

Not so. I was back in the “dark gaunt house” on Usher’s Island in 2004 for a re-enactment of the centenary (in as much as the exact year can be surmised) of the party in The Dead, based on Joyce’s own recollections of a similar dinner held by his great-aunts on the Feast of the Epiphany every year.

The barrister Brendan Kilty had bought the 18th-century building and carried out significant refurbishments, saving it from structural collapse and restoring whatever features remained after years of neglect and abuse.

But Kilty filed for bankruptcy in 2012, and the house once again fell empty. You can see the signs of neglect if you walk past: weeds on the steps, flaking paintwork, cracked glass. It’s of a part with its surroundings. Usher’s Island may not be as derelict as it was in 1987, but that’s not saying much. A couple of jerry-built apartment blocks built in the 1990s make the skyline a bit less gap-toothed; the Calatrava-designed bridge offers a promise of prosperity and cheerful modernity that has yet to be delivered.

This is still a bleak place. In 2016 Usher’s Island was declared the ugliest part of Dublin in research presented to the Royal Institute of the Architects of Ireland. The history of No 15 embodies the history of Dublin’s inner city. Built by Georgian merchants, annexed by the Catholic middle class, immortalised by one of our greatest writers, left to decay for decades until saved at the last moment during an economic revival, and now set to become yet another leisure facility for city-break visitors.

As with The Dead itself, this latest chapter can be read in several ways at once. In one it’s part of the commodification of the city on behalf of the tourism industry at the expense of those of everyone else; in another it represents the disastrously hands-off approach to the urban landscape that has incentivised dereliction instead of penalising it. And it also appears to illustrate again the philistinism of a political establishment that is happy to share in the reflected glory of Irish cultural achievements without putting any money where its mouth is.

The last of these was the focus of an open letter sent last week to Minister for Culture Josepha Madigan. The signatories – a roll-call of the literary great and the academically good – called on Madigan to purchase the house and turn it into “a worthwhile site of literary pilgrimage, a way to inform and inspire new generations of Joyce readers”.

Perhaps that would be a good idea, although a similar site has just opened at the Museum of Literature Ireland, in Newman House on St Stephen’s Green. And if the story itself is about anything, it’s about the unreliability of memory, the double-edged nature of pilgrimages and the inevitability of change and death.

I love the house, and treasure the fact that it still exists. Colm Tóibín was correct when he told RTÉ last week that “this is not just where the story was set… It hasn’t been reconstructed on the inside – it’s intact”.

But the Department of Culture is also right when it points out that the building’s inclusion on the Record of Protected Structures places a duty of care on the owners. Presumably this must include the key elements – the ground and first-floor configurations, the staircase – which make the interior so recognisably the same as it was in the story.

If the core and front of the house are safe, then does it matter what else gets built around it (a five-storey block is envisaged at the back)? It will hardly be worse than what’s there now. And if that core is preserved for future generations to value in whatever way they see fit, that might be the best outcome.