When foot and mouth disease ground Ireland to a halt

From the archive: ‘A catastrophe looms,’ read The Irish Times editorial in March 2001 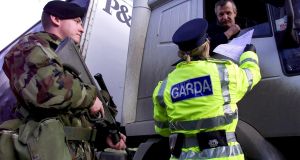 A garda requests a list of goods from a lorry driver at a checkpoint on the Dublin-Belfast Road at the Border in February 2001. Photograph: Ferran Paredes/Reuters

“Vigilance urged on disease outbreak”. So read a small headline in February 2001 in The Irish Times, as then minister of state for agriculture Noel Davern, worried about foot-and-mouth disease reaching Ireland. “The position is serious,” Davern was quoted as saying. Ireland had not seen an outbreak of foot-and-mouth since 1941, yet Davern’s urgency would not be enough to halt the spread of a devastating disease for farmers, 60 years after that wartime outbreak.

“Crisis worsens as much of rural Britain is closed,” a headline ran under then London editor Frank Millar’s report a week later. At that stage 18 cases had been confirmed in Britain, including one at an abattoir in Wales. The wider impact of the outbreak was already being seen, as Millar reported. “The cancellation of Saturday’s Six Nations rugby match between Wales and Ireland heightened speculation that the Cheltenham Festival might fall victim to the crisis. The Prince of Wales cancelled a visit to rural Northumberland next week, saying it was “critically important” to keep movement to the countryside to a minimum.”

By March 1st Irish agriculture was staring down the barrel of a gun. An editorial in the newspaper impressed upon the public the gravity of the situation. “A catastrophe looms,” the editorial read, in uncharacteristic dramatic fashion. “The full enormity of the foot and mouth crisis was brought home on this island yesterday when the Northern Irish Minister for Agriculture, Mrs Brid Rodgers, said she believes a case of the disease has been identified close to the Border in south Armagh. Ominously, sheep from the farm are reported to have been moved to this State.”

The following day, notices were running in The Irish Times detailing restrictions around the importing of greyhounds and horses, as well as a notice about the Foot and Mouth Disease Prohibition of Exhibition and Sale of Animals Order, 2001. A day after that, March 3rd, 2001, Coillte and Waterways Ireland ran notices in the newspaper with the news that Coillte forests were now closed to the public, and that members of the public should refrain from using Waterways Ireland’s canal towpaths and walkways in rural areas “unless it is essential to do so”.

The letters pages had their own take in the early days of the outbreak. One reader wrote wondering why church gatherings hadn’t been cancelled. “Surely the good Lord would grant dispensation for such a worthy cause,” read the letter. Another reader wrote about the upcoming international celebrations of Ireland in March. “If for no other reason than to set an example for the rest of us, I assume that all those politicians who were planning to travel abroad for St Patrick’s Day will now cancel such arrangements.” BirdWatch Ireland ran a notice to say all their events and field survey work were postponed. Local authorities ran notices about that everything from stately homes to playgrounds, football pitches to parks, were closed.

Many will remember 2001 for the ubiquity of disinfected mats. On March 5th, Superquinn ran a large notice headed “Why our welcome mats might look a bit different”. “Please rest assured. Foot and mouth disease is not a risk to human health. But in the public interest and in response to customer requests, Superquinn has placed disinfection mats for your feet and shopping trolleys at the entrance to all our shops.”

As March rolled on, the messages in the newspaper were increasingly urgent. “Obey the rules, heed the advice,” was a direct call to Irish Times readers by the newspaper on March 10th. “Readers are reminded strongly that, when considering short breaks, they should bear in mind the implications of the current outbreak of foot and mouth disease … Readers should be responsible and should always comply with the advice and recommendations of the authorities at home and abroad. These include limitations on travel and disinfection procedures at the points of entry and exit.”

When the news broke later in March that a case had been identified in a flock of sheep in Louth, the urgency was clearly legitimised. The St Patrick’s Day festival was cancelled, troops were deployed to Dublin Port, and in the area around the farm in Jenkinstown, animals that could potentially carry the disease, such as deer, were shot by snipers. By the end of the outbreak in September 2001, more than six million cows and sheep were killed in the UK, and the devastating images of distraught farmers burning pyres of animals that had populated the news for the spring and summer subsided. Those images were soon overtaken by the loss of human life on the attacks in New York and Washington in September, which would change the course of world history.