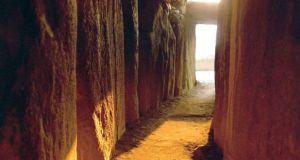 Researchers discovered boulders which they believe may have been intended for use at Newgrange.

Archaeologists have identified what could be neolithic log boats as well as boulders, perhaps intended to be used in the building of Newgrange or Knowth, in the river bed of the Boyne, near to the famous monuments.

The survey of the river, believed to be the first of its kind, is the work of a team of researchers from UCD’s School of Archaeology and the University of Ulster’s School of Geography and Environmental Science, funded by the Royal Irish Academy.

They are focused on the river bed where it runs through the Brú na Bóinne World Heritage Site and are part of a project to focus on the role of the Boyne which is at the heart of the “Bend in the Boyne”.

The research is led by Dr Stephen Davis, UCD School of Archaeology, who said that despite being a key thoroughfare and trade route over millennia, “our understanding of the river was identified in the 2009 Brú na Bóinne Research Framework as a major knowledge gap.”

“The project had three main aims: to undertake new mapping of the river channel and to potentially identify new archaeological features, to explore the landscape of the river at Brú na Bóinne using Geographic Information Systems (GIS) and to collate local folklore relating to the Boyne from the Schools’ Collection to better understand the Boyne in its local context.”

The results of the surveys have not disappointed and come just months after other non-invasive work discovered 40 previously unknown monuments close to Newgrange.

In addition to learning more about the structure of the river, this latest research has so far identified 100 items of interest in a 10km stretch.

“These items may or may not be archaeological, but we can say for certainty that they don’t belong there, they are things that are out of the ordinary and would benefit from further analysis.”

Ten of them appear to be “log boat type anomalies and there have been log boats, including one that dated from the Neolithic era, found in the Boyne before”.

There are also 16 items which appear to be large boulders or rocks and Dr Davis said, “if we are thinking of somewhere where people were potentially moving large stones up and down to build monuments with them it is almost certain that some of these were lost in the Boyne on their way to being used in construction”.

It is highly unlikely that one of the log boats could have transported large rocks or boulders, but archaeologists think that rafts may have been used.

The surveys also found weirs, accumulations of debris that could have an archaeological importance and 31 very modern tyres.

The team also explored the relationship of the Boyne to the monument location using data gathered over a number of seasons of large-scale survey and existing airborne laser scanning surveys.

“These analyses highlight the importance of visibility from the river for site placement, especially in regard to the Neolithic passage tombs and timber monuments.”

“The Neolithic landscape is very much constructed around the river. For an observer from the river, the ridge on which Newgrange, Knowth and Dowth are located would have formed a northern barrier beyond which there was no visibility. To the south the steep slopes again block the observer’s views.”

Dr Davis was also involved in the 2017 research which uncovered what he described as a “spectacular” monument beside Newgrange, that also appears aligned with the Winter Solstice sunrise.

Speaking on this latest research he said, “this work is very valuable and like so much of the non-invasive work we have been doing in Brú na Bóinne over the last decade it helps us build the foundations from which we can really begin to understand the landscape.”

The research findings will be part of a temporary exhibition, featuring key project results, to be housed in the newly redeveloped OPW Brú na Bóinne visitor centre.

Once Upon a Time: A Short History of Fairy Tale, by Marina Warner
10