The smoker’s Waterloo: The day Ireland stubbed out smoking in pubs and clubs

From the Archive: Issue of ban was consistent theme in Irish Times’s letters pages 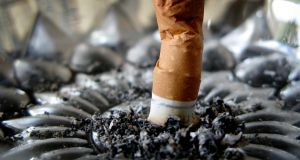 Ireland was a trailblazer, as the first country in the world to ban smoking in the workplace in 2004. Photograph: Matt Morton/PA Wire

Discourse around smoking bans often focuses on bars, clubs and restaurants. Ireland was a trailblazer, as the first country in the world to ban smoking in the workplace in 2004. But discussions around other smoking bans stretch back decades.

A report on June 26th, 1975, stated that Derry City Council rejected, by 12 votes to 10, a recommendation to ban smoking at meetings, “Alderman Casey, chairman of the committee, who is himself a smoker, said that the most short-tempered members of the council were non-smokers. Councillor Gerald Heatley, a non-smoker, said he thought council business could be impaired by a ban. He thought members would be running out every 15 minutes for a smoke.”

The following November, members of Killarney Urban District Council were being asked to abide by a new rule banning smoking during council meetings. On April 19th, 1978, a report ran in the newspaper about an unofficial strike in an Armagh shoe factory in protest against the withdrawal of a “smoke break”.

Four days before February 17th, 1988, an article in the Saturday edition of The Irish Times noted that Dublin’s bus-users would remember the following Wednesday forever more, “From that day on, smoking will be banned on all city bus services, upstairs as well as downstairs… The fact that the total ban is being introduced on Ash Wednesday is a touch of irony unlikely to be lost on the thousands of commuters who will be affected.”

Non-smoking bus users had consistently complained about the “sickly environment” created by smokers lighting up on buses, along with the smell of stale smoke from their clothes, and inhaling people’s exhaled smoke. Asthma sufferers and those with bronchial disorders were confined to downstairs on buses. the ban also applied to bus drivers, conductors, and cleaning and maintenance staff, but elsewhere in the country, Bus Éireann said that they had no plans to introduce a similar total ban.

By May of that year, calls for a complete ban on smoking in Irish hospitals were made by the then chairman of the Chief Fire Officers’ Association, Tom McDonald. “It is inconsistent to have government warnings on cigarette packs about the risk to health from smoking and then allow smoking in buildings which are supposed to contribute to the improvement of people’s health,” he said.

The issue of smoking being banned in public places was a consistent theme in The Irish Times’s letters pages. “My, my, my, we now have another string to our bow of righteousness – smoking,” one reader wrote in May 1990. “The ‘Moral Majority’ (are they really the majority, a consensus was never taken) are now imposing their will on the smokers of this country. The most intolerant of this ‘majority’ are ex-smokers and are saying, ‘If I can’t have cigarettes neither are you having them’! How ever childish. Their intolerance is quite terrifying in its intensity.”

In the early 1990s, the debate about banning smoking on airplanes rattled along. By 1990, Aer Lingus already operated a non-smoking policy on all domestic, commuter flights, and on commuter flights to Britain. At that time, Ryanair had a smoking ban on all flights under two hours long. In May of 1990, legislation was introduced banning smoking in public places throughout the State.

The letters page continued to light up, such as this gem on May 1st 1991: “Sir - On April 24th I took Bus Éireann express service from Waterford to Dublin and discovered to my horror that I am being discriminated against, due to the fact that it was completely no smoking. I respect the rights of non-smokers, but I also have rights. I smoke, I damage my health, but it is my health to do with as I wish. Bus Éireann should save the money spent on all those extra ‘no smoking’ signs, and use it to improve the archaic, dungeon like toilet facilities at Bus Aras.” But such “curbs on smoking seem successful”, as the headline ran on July 15th, 1991, over a story written by Ed O’Loughlin. The culture had shifted.

In February 1993, the late Kate Holmquist wrote a piece in response to Hillary Clinton banning smoking in the White House. “Thank you, Hillary, from the bottom of my heart,” Holmquist wrote in her inimitable, energetic style, “because I can now celebrate the fact that I am no longer a crank. Some day, when smoking is banned not just in the White House but in Leinster House, and when smokers are free to pollute the environment only in their own homes – unless their families sue them, of course – we long-suffering passive smokers will look back on Ms Clinton’s stand as the smoker’s Waterloo.”