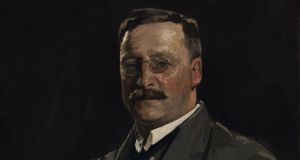 WB Yeats campaigned with Arthur Griffith against the British Boer war and was monitored by the police. He publicly scorned a visit to Ireland by Queen Victoria. Some say he even joined the Irish Republican Brotherhood before 1900.

The old Fenian John O’Leary was a mentor to both Griffith and Yeats. Griffith’s weekly United Irishman – its columns often penned by respected literary figures – boosted the whole Yeats family. Griffith, later the founder of Sinn Féin and president of Dáil Éireann, gave Yeats paternal guidance as well as what John Hutchinson describes in his study of the Gaelic Revival as “invaluable” aid.

Griffith even said that he gave Yeats the dramatic ending of his influential play Cathleen Ní Houlihan. So what possessed Yeats to claim later that Griffith, who had weak eyesight, stared “in hysterical pride” from a portrait painted as the Anglo-Irish Treaty talks ended in late 1921?

Yeats proclaimed early the right to “remake” himself aesthetically. He also “remade” himself politically as he sought a wider cultural and geographical context for his theatrical ambitions in a way that James Joyce mocked.

The writer Seumas MacManus was puzzled when Yeats, in autobiographies, made nothing of his earlier connections with Griffith: “I wrote to tell him my surprise. He answered that he didn’t know him well. This again surprised me and I told Y[eats] that I walked into the shabby two-by-four [United Irishman] office in which poor G[riffith] immersed himself and saw him sitting on the floor, back resting against the wall, nursing his knees, conversing with A[rthur] in this most emphatically intimate manner. Y[eats] did not reply.”

The younger Yeats declared: “I am not English and owe England no loyalty.” He protested to an English liberal paper when Dublin Castle seized issues of the United Irishman. Padraic Colum, who sometimes worked with Griffith, wrote that callers to Griffith’s little office “might encounter a figure that seemed out of place there: a young man seated on a pile of newspapers ... He was William Butler Yeats.”

Yeats recalled that when his controversial play The Countess Cathleen opened, Griffith – then “an enthusiastic anti-cleric”, according to Yeats – claimed to have brought “a lot of men from the Quays and told them to applaud everything the Church would not like”.

When Griffith reviewed a collection of Irish poetry by a friend of Yeats, criticising it for omitting Oscar Wilde and Alice Milligan, among others, Yeats went to Griffith’s office to complain. There was a wobbly chair against the wall and a witness later recalled that Yeats “sat on the chair while expostulating. I heard a commotion myself, and on looking in – Yeats was floundering on the floor, the seat having collapsed under him, to Griffith’s intense amusement.”

Twenty years before Yeats was to win the Nobel Prize in Literature, Griffith proclaimed: “Mr Yeats is the greatest living poet and the greatest of Irish poets.” Griffith suggested that “whoso may be too poor to buy it should borrow or steal a copy” of his work. In Griffith’s paper the theatre promoter Frank Fay praised Yeats’s play The Land of Heart’s Desire, and Yeats thanked him.

Two months later Griffith was praising also Yeats’s father and brother, both painters, as well as his two sisters in “this very gifted family”. Griffith subsequently laid a restraining paternal hand on Yeats’s shoulders when the latter sought to respond in the United Irishman to a reviewer in the Freeman’s Journal who accused Yeats of wishing to substitute the Irish mythical hero Cúchulain for Christ.

Griffith declined to publish his response, telling Yeats: “Anything we write must show kindly dignity not vexation – They are only untaught children”, and “the attack on reviewers leaves an impression of fretfulness”.

Griffith more than once said that he helped Yeats complete his breakthrough play Cathleen Ní Houlihan, which opened in 1902 and which Yeats dedicated to Griffith’s recently deceased best friend and comrade, William Rooney. It is thought that Lady Gregory actually wrote much of the script. But in 1914 Griffith wrote that Yeats “added the present ending of that very beautiful little allegory at the suggestion of the present writer to emphasise its propaganda”.

As the play originally stood, so Griffith told Robert Brennan after 1916, the ending was bald and Yeats knew that he needed a last flourish but could not get it.

Brennan was interned with Griffith. By the time that he recalled this conversation in 1950, he had served as Irish ambassador to Washington (appointed by de Valera) and subsequently as director of broadcasting at Radio Éireann. Brennan admitted that several poet friends of his doubted the story but wrote: “I knew Griffith very well. He was the most unassuming and modest of men and he would never have dreamed of making a claim of such a nature if it was unfounded.” Not every biographer of Yeats addresses Griffith’s claim.

In November 1902 Griffith also published a Yeats play in five acts, Where There Is Nothing, as a special supplement with the United Irishman. The following year Yeats used Griffith’s paper as his platform for three articles responding to an attack on the Irish National Theatre by the Irish Independent.

Griffith and Yeats later parted ways, disagreeing bitterly about the direction in which some Irish playwriting was going. Griffith felt that Irish theatre should serve the cause of independence and revolution, regarding Synge’s Playboy of the Western World as stage Irish and politically damaging.

Yeats and Griffith became disaffected acquaintances who for years were not on speaking terms. In 1916 Griffith launched one of those savage verbal assaults to which he sometimes gave vent, attacking Yeats as both an imperialist and imperious, querying his knowledge and scholarship. But later, as president of the new Dáil, he nominated Yeats to represent Ireland at a convention in Paris concerning the Irish “race”, and Yeats admitted that he would be tempted to accept a possible offer to become minister for fine arts in Griffith’s government.

A friend of Griffith thought that “Griffith loved Yeats; it was just a quarrel”. Griffith, when interned in Gloucester Jail in 1918, reportedly organised a celebration of Yeats’ birthday with recitations of the latter’s poetry.

As a senator, Yeats once referred to the dead Griffith generously as “a man of the most enduring courage and the most steadfast will”. But then in the 1930s he damned him by a side swipe that seems baseless. After visiting Dublin’s Municipal Gallery Yeats wrote,

Around me the images of thirty years:
An ambush; pilgrims at the water-side;
Casement upon trial, half hidden by the bars,
Guarded; Griffith staring in hysterical pride;

The use of the word “hysterical” is inexplicable. It has helped to sideline in history the once central figure of Griffith. In John Lavery’s portrait, to which Yeats referred and which was painted during the Treaty negotiations in 1921, when the Laverys were friendly with Griffith and Collins, there is no evident representation of “hysterical pride”. Nor is there any reason to think that Lavery saw Griffith that way. Indeed Griffith was then under immense pressure, and his posture and expression – behind thick glasses – are subdued. The portrait was one in a series of Irish leaders meant to be commercially attractive, not critical.

As early as 1903, in Griffith’s United Irishman, the socialist Fred Ryan had taken issue with Yeats for depicting nationalist fervour in a way that Ryan claimed tried to define advanced nationalists clinically and thus reduce patriotism to pathology. Yeats came to articulate an ostensibly gendered theory that Ireland had long pursued fixed ideas until “at last a generation is like an hysterical woman who will make unmeasured accusations and believe impossible things”. One wonders to what extent this was a projection of his earlier confused and obsessive fixation on Maud Gonne, who rejected him in favour of the militant republican John MacBride.

Yeats later passed over his sideswipe at Griffith when he said simply that the poem dealt with his “many friends”, including “statesmen” in an “Ireland in the glory of her passions”. But damage had been done to the memory of a shy and self-effacing politician who deserves honour for his nuanced and still challenging concept of Irish statehood.

Dr Colum Kenny is professor emeritus at DCU. His latest book, The Enigma of Arthur Griffith: “Father of Us All”, is published by Merrion Press