Real-life Peaky Blinders: How the IRA sourced guns from the ‘Birmingham mob’ 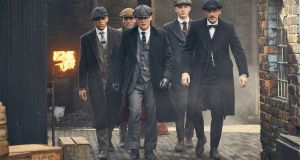 Britain at the end of the first World War was a country in a state of foment, and its government led by David Lloyd George lived in terror of a communist revolution. The Bolsheviks had triumphed in Russia, there were strikes and riots everywhere. The country had more weapons than it knew what to do with it.

This is the background to the cult BBC TV drama Peaky Blinders, now in its fifth series, which is set in Birmingham in the immediate aftermath of the first World War. In series one, the Shelby gang, ex-servicemen who had fought in France, steal a large cache of weapons from the Birmingham Small Arms Factory – an institution that did exist. In the series, the cache comes to the attention of the local IRA which looks to appropriate it for the “Irish Republic”.

Peaky Blinders is fiction, albeit loosely based on fact, but newly released files from the Military Service Pensions Collection show the IRA really did use Birmingham gangs to procure guns for the War of Independence.

Many of the weapons used in the Easter Rising were stolen from a Birmingham arms factory, according to IRA man John Joseph McGrath (also known as Sean McGrath) in his pension application to the Irish State for military service in the revolutionary years.

In the run-up to the Rising he purchased weapons from a source at the Midlands Arms Factory in the city and sent them to Ireland via travellers from London to Dublin. On Good Friday 1916, the day the Aud was scuttled with 20,000 guns aimed for the rebels, McGrath escorted 150 kilos of weapons, mostly small arms and ammunition, to Dublin. They were used in the GPO on Easter Monday.

When McGrath was arrested early in 1919, arms purchasing activities were taken over by the London-born brothers Denis and Joseph Carr, the sons of a successful road contractor from Co Tipperary.

The Carr brothers began by sourcing small amounts of weapons from ex-servicemen, but nothing that would meet the demand for weapons in Ireland. Then, financed by the IRA in Dublin, they extended their net into London and Birmingham’s underworld. In Peaky Blinders, Italian and Jewish gangs are among the biggest rivals of the Shelbys.

The Carrs procured guns from the “Birmingham mob”, travelling regularly to the city, which was then the centre of Britain’s munitions industry. The Carrs also targeted the Titanic gang of Hoxton, east London, who were mixed up in drug smuggling and illegal bookmaking, and the Sabinis of Clerkenwell, a gang of Italian origin.

Patrick Maher said that he purchased arms from “Russians” in London

Through these, Denis Carr was able to make contact with a major arms dealer in the Hackney Road and purchase an “unlimited supply of ammunition and guns from revolvers to machine guns”.

Several other pension applicants of the 1930s and 1940s mentioned arms-procurement activity in Britain. Patrick Maher said that he purchased arms from “Russians” in London; Denis Kelleher referred to “Jewish arms-dealers in the Whitechapel area”; while Eoin O’Grady recalled that he purchased arms “from Jews and Arabs in the East End”.

Billy Aherne, a Cork man sent to London by the IRA, sourced guns from two dealers, one called Fingers, the other a gunsmith in Hackney Road “who sold us any amount of stuff, Webleys and .303 and .45 ammunition”.

Sean Cleary procured guns for the IRA in Kerry from a “dwarf, a little fellow, a cripple” called Harry Friday in Walworth, south London.

Seven dumps were set up by the IRA across London. The locus of this clandestine operation was a house in Tottenham lived in by Irish woman Agnes Browne and her husband Robert.

Browne made dozens of trips to the London docks sometimes carrying revolvers in shopping bags overlaid by vegetables. When her husband was transferred to work in Belfast in 1921, there was so much weaponry in their home that they needed a horse-drawn cart to transport it to the docks.

The Carr brothers set up a picture frame shop in the London docklands as a front to dump and collect arms. Guns were loaded on board four B&I vessels sailing between London and Dublin. Friendly stevedores packed the guns into crates, and sailors on board were sworn into the IRA by an Oblates priest, Rev Jack O’Gorman.

One consignment consisted of 50 .303 Lee Enfield rifles and three sacks of small arms and ammunition.

The Carr brothers were so successful that IRA men came from Ireland to buy guns from the same sources. They were sent home again. “While my men and I were able to pass as Englishmen and were not suspected, the men sent across were naturally marked down as Irishmen would have seriously impeded and jeopardised our organisation,” Denis Carr remembered.

In May 1922 the Carrs were sent to Germany with £1,500 to buy weaponry. In echoes of the arms crisis which happened nearly a half century later, the Carrs purchased weaponry which was supposed to be sent to the North for the defence of nationalist communities.

Pat O’Sullivan used his status as a London-born, wounded British army veteran to simply take weapons from a RAF barracks in Uxbridge, west London which was used by demobbed airmen.

His brother Joe and Reggie Dunne, the officer commanding the IRA in London, were also wounded veterans. “We all were able to wear in our coats the wounded badge awarded by the British army and could mix freely without being suspect,” Pat recalled.

Stealing the weapons – revolvers and up to 100 rifles – was easy. Getting them to Ireland involved ingenuity. He and three others posed as a golfing party on holidays. They stuffed the weapons into 10 golf bags and covered them with travelling rugs.

Joe O’Sullivan and Reggie Dunne were hanged for the assassination of Field Marshal Sir Henry Wilson in June 1922.