Gregory Porter: I recorded my album on a phone. Then I lost the phone

US singer on his favourite film, the one gadget he can never be without and more 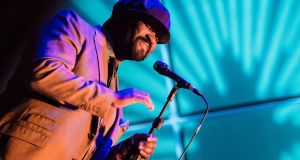 Gregory Porter: “I feel I have to read something that makes me smarter, which keeps me away from fantasy and fiction.” Photograph: Mauricio Santana/Getty Images

Fences, with Denzel Washington. Film, music and other art forms work to normalise different cultures, and Fences does exactly that. August Wilson wrote about black life but you could put this working-class story into Irish culture or British culture and it applies: it’s about the human condition. I like the fact that it demystifies a group of people, so it’s cool for me.

I feel I have to read something that makes me smarter, which keeps me away from fantasy and fiction. So I tend to read biographies; the one I’m reading now is the biography of [former US president] Ulysses S Grant.

I can never be without a voice recorder. I have a Zoom recorder and I use my iPhone, and another Android phone I use. I take about five phones and three voice recorders with me to the studio, because I might start a song on one device, do the bridge on another device, and then finish it off on another one. The whole of [2014’s] Liquid Spirit was recorded on one phone over five years, and I lost it 10 days before the recording session, so I had to rewrite all of the songs. But that earned me my first Grammy, so maybe I was supposed to lose the phone.

I also use a voice recorder if there’s something I want to say to somebody but they’re not there, which is quite often because I’m travelling. Sometimes I’ll express them to these people, but other times I don’t. It’s basically talking to yourself, but because there’s a tape recorder there it seems a little less crazy.

I always listen to something that’s going to teach me something new, so I listen to NPR [National Public Radio]. On StoryCorps, you hear stories from everyday people. Sometimes the interview is done by a professional journalist, sometimes it’s done by a friend of theirs. I’m wholly attracted to everyman stories – they’re always going to be more fascinating than an imaginary story.

I’ve been all over the world so picking one is hard. There’s Tokyo and London, but being near the water is important for me, so probably Porto in Portugal. I did a few shows there and afterwards I was invited to a house party that was right on the river and across from a large port winery. We drank wine, ate and lit Chinese lanterns; they went flying into the sky at night, it looked amazing. So my memories of Porto involve a great view, great food and great company.

I’ve been listening to Chance the Rapper. Apparently he’s tweeted and spoken on the radio about me a few times, so I think he likes my music and I’m taking time to dig into his work. I’m on the run, so I’ve just been YouTubing his music, especially his latest album. He’s a clever lyricist and when the final story is written about hip-hop, they’ll write about his rhyming and phrasing. It feels connected to jazz drumming.

The Alvin Ailey dance troupe. They’re a modern dance group in New York City and I’m fascinated by their performances; they bring such emotion to the movement of the body. I never thought I could cry from dances, but that happened.