‘Sean Duffy is not based on me – but there are elements’ 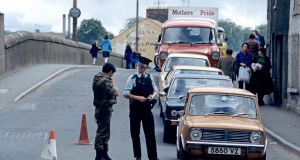 I joined the RUC in 1989, right after I finished my A Levels. I grew up in north Belfast where the unemployment in the ’80s was running at 35 per cent. Your career choices were limited to emigrating to England or America or joining the police, dole office or civil service. I decided to join the police.

As a Catholic I knew I would be considered a “traitor” by many members of my own community, even members of my own family, so I told people I had joined the civil service. Catholic policemen were few and far between back then (about 10 per cent of the RUC), subject to harassment from their colleagues (some were openly sectarian) and, of course, a prime target for the IRA, the INLA and sometimes the loyalist paramilitaries too.

I knew Adrian back then through a family connection and he knew what I did for a living and we often talked about my life and experiences in the “peelers”.

His Sean Duffy character is not based on me but there are elements of my life in some of his experiences. Adrian has captured a real flavour of what life was like for a policeman in the 1980s. He’s right about the fear and the craic and camaraderie. There are some things he gets way wrong. He doesn’t really capture the utter boredeom of most police work (back then you were bored out of your mind about 95 per cent of the time and completely and utterly terrified about 5 per cent of the time.)

Sean Duffy’s life is quite a bit more exciting than mine, but by basing his books on actual events and cases of the time he’s distilled the essence of the craziness of Ulster in the 1980s.

His books are popular amongst policemen and former cops in Northern Ireland and for every “it wouldn’t happen like that!” I hear an “oh yeah, that bastard Chief Superintendent, I remember him.”

The books are also a kind of revenge too. Both Adrian and I were kids in the 1980s, kids who had to suffer at the hands of the paramilitary thugs running the estates and the idiotic politicians who were running rampant over Northern Ireland back then. Adrian has remembered their names and what they did and 30 years later exposing their cruelty and stupidity is a kind of rough justice.

In 2001, I, like many (but not all) of my colleagues, made the transition to the Police Service of Northern Ireland which is a very different entity to the old RUC and operates in a radically transformed environment. People today can hardly remember quite how bad things were just a few years ago. Some young weans don’t even really believe it, I think.

People like Adrian and Stuart Neville and Brian McGilloway and David Park are out there making sure that no one really forgets because that’s a world we never want to return to.
Rain Dogs by Adrian McKinty is October’s Irish Times Book Club pick. The series will culminate in a public interview with McKinty conducted by Irish Times Books Editor Martin Doyle in Belfast’s Europa Hotel (Europe’s most bombed etc) on Saturday, October 28th, at 1pm as part of the inaugural NOIRELAND International Crime Fiction Festival, which runs from October 27th-29th. The podcast of the interview will be available on October 30th.