Happy Death Day review: If you can’t enjoy this give up on film

The sleeper slasher hit you’ve been waiting for 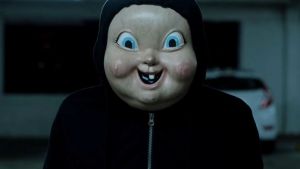 The current vogue for horror movies is being jollied along by an unstable political landscape, the ennui engendered by too many reboots, and, lest we forget, by the mighty market smarts of Blumhouse.  Following on from Split and Get Out, the latest box office sensation from super-producer Jason Blum’s canny imprint arrives in cinemas with a proven genre director attached (Christopher B. Landon, who co-wrote and directed Paranormal Activity: The Marked Ones and Scouts Guide to the Zombie Apocalypse) and a doozy of a pitch: Groundhog Day meets Scream. Or possibly Groundhog Day meets Final Destination. Either way, we’re there

La La Land supporting player Jessica Rothe is terrific as Theresa “Tree” Gelbman, a millennial Mean Girl who eye-rolls her way through her 18 birthday, gets murdered by a masked slasher, and wakes up, only to re-live the exact same day. Who is the killer in the creepy get-up? Might it be the Queen Bee at the sorority house? Or the wife of the doctor Tree is having a campus affair with? Frankly, there’ll be fewer suspects in the incoming Murder on the Orient Express reboot

It falls to this Final Girl to solve the mystery of her own death and ideally become less of a toxic, entitled narcissist while doing so

Time loops can make for awesome and varied cinema (see Primer, Timecrimes, Edge of Tomorrow for starters). Happy Death Day uses the trope to maximise its slumber-party appeal. There are a few well-timed jump-scares and composer Bear McCreary’s score is full of bass and dread. Mostly, though, this fun-loving instant teen classic shoots for John Hughesian romance and scores with a slam dunk.  A youthful ensemble - including Israel Broussard (as the token Nice Guy), Ruby Modine (as Tree’s patient roommate) and Rachel Matthews (as the Regina about campus) – bring energy to an already zesty confection

Seriously: if you don’t have fun at Happy Death Day, you should probably stop watching movies altogether. There’s a new scream queen in town.

Eric Clapton opens up – even on his bizarre racist period
7

Hands off the Toy Show: Why the Grinch can’t steal our Late Late Christmas
Real news has value SUBSCRIBE