Richard Murphy at 90: A poet of other people 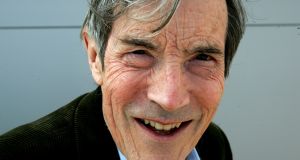 When I was thinking of what I might say by way of introducing this celebration of the poet Richard Murphy, various images came to mind – back in the early ’80s, en route to Dublin from Clifden in the car with Richard driving up Shop Street in Galway, his arm out the driver’s window, like a farmer moving cattle down a lane, he said: “We’ll stop at Hayden’s Hotel in Ballinasloe. They do a good cup of tea and scone at a decent price too.”

Or listening to him on stage at a poetry festival in Amsterdam in 1981 reading Amazement, his poem on the hunger strikes to an absolutely enthralled audience.

It was the impeccable English-accented voice with its inflections of the west of Ireland that strikes me most. And also his posture, the tall, seemingly aloof, intense yet ambling figure, always on time, conveying the poem with unfailingly perfect diction.

I also think about his family and the places associated with their histories here in Ireland, in England, in Ceylon (as then was) and of his own life and times in South Africa, Greece, France, North America, going back to postwar Oxford.

It is a much-lived life as Poems 1952-2012 (Lilliput Press), The Kick, his memoir recently reissued in a stunning hardback by Cork University Press, and In Search of Poetry (Clutag Press) abundantly prove; there is even a sense of design about it all but I suspect that’s only in hindsight.

As he says in The Pleasure Ground: “I searched for grounds of pleasure that excluded nobody, till I found them by living with friends I loved among people on or near the sea. There I tried to write poetry true to that life in words put together to last.”

For me, the figure of Richard’s father plays a pre-eminent role in the poet’s writing life. As his note to his long poem of 1963, The God Who Eats Corn, reveals, the tension the poem produced, opens up a deep complex in the son’s understanding of what his father, one of the last representatives of the British Empire in decolonising Ceylon, stood for:

“‘I think the trouble with the poem is that you don’t love Africa.’ He was right. U had perceived the poem as a portrait of a good man behaving as well as possible in a bad situation not of my making. My poem had been an attempt to come closer to him from a distance of six thousand miles. I replied: ‘The poem was written by someone who doesn’t love Africa about a person who does, and perhaps the irony of this may increase the interest.’ I was sad to have failed to please my father by writing a poem in his honour. Worse still, I angered him so badly on that visit he lost his temper one evening at dinner.”

The dust-up is resolved though. “Next day…he apologised in the natural way that he in his Church of Ireland Rectory youth had been taught, allowing me to feel forgiven and redeemed.” As Richard Murphy remarked in a fascinating Poetry Ireland Review interview with Benjamin Keatinge, in his home near Kandy, Central Province, Sri Lanka where he has lived in retirement since 2007, his upbringing determined much of what he wrote about:

“I came back with my mother to Sri Lanka in 1984, almost 50 years after we had left Ceylon in 1935” and, for the first time in my life, I realised that I had had an incredibly happy childhood in this beautiful country. When the plane circled over Negombo and I saw the palm trees, and the lagoons, and the beach, and we landed, I felt I would like to kiss the ground. It was a wave of love and joy that arose within me that I never knew was there. It was quite extraordinary. From there on, I thought that some of my heart is here in the country and I would like not to lose that.”

What has always impressed me about Richard’s classically poised and precise poems is the way they recuperate the world of experience in a language that is available yet also capable of depth and implicit feeling. In this sense, Richard’s poems are not about himself at all. But about “others” and their reality. It’s what makes his art so easy to overlook and yet it is the hardest of all things to do in language; a form of knowledge that is a lesson in itself, shunning explication.

His poems are populated with people – family, friends, fishermen, fellow-writers and versions of all of these – in much the same way as the places he has lived in and identifies with, the different relationships he inherited within various communities alongside those he has created over a very long life, producing some truly memorable and intensive poems; and my own favourite, Mary Ure, is surely one of the most hauntingly beautiful nine-line poems in the English language with its ethereal conclusion:

She walks by Lough Mask in a blue silk gown
So thin the cloudy wind is biting to the bone
But she talks as lightly as if the sun shone.
Gerald Dawe’s poetry collections include Selected Poems and Mickey Finn’s Air. This is the text of his introduction to a Poetry Ireland event organised by Ben Keatinge to mark the 90th birthday of Richard Murphy. Other speakers included the poet’s daughter, Emily Riordan, and brother, Christopher Murphy, Siobhan Campbell, Lucy Collins, Andrew Mc Neilliea nd Ben Keatinge, whose volume of essays, Making Integral: Critical Essays on Richard Murphy, will be published by Cork University Press in 2018