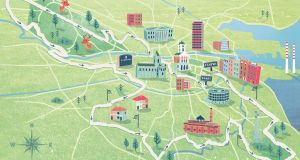 The annual SSE Airtricity Dublin Marathon takes place on Sunday, October 29th. As more than 20,000 hardy souls plod the 26.2 miles around Dublin city and county, we look at some of the interesting history and architecture they’ll pass on their way...

The marathon kicks off in Georgian Dublin. Fitzwilliam Square was built on orchards and fields in the early 1800s. Sites were leased, often to developers, who built the houses to set criteria. Dublin was becoming less medieval and more planned. This allows Fitzwilliam Street to accommodate the 20,000-plus marathon contestants, shifting from foot to foot.

In a short mile, the runners will be in Dublin 8. This area was favoured by the Vikings and Norman settlers. It is a lot older and a lot newer than Dublin 2. Nearby, Dublin Castle played a defensive role in the city from Viking times until the 1920s.

Spare a glance for St Patrick’s Cathedral. The tower was built in 1362 and the spire added in 1749. The route will shortly pass a competing cathedral – Christchurch. This was given a Gothic makeover in the 1870s, at which point the walkway that reaches across the road was added.

The route weaves down to the river Liffey. It approaches 15 Ushers Island, the last remaining Georgian house in its row, where James Joyce situated his short story, The Dead. The house was owned by Joyce’s great aunts.

The Liffey was previously unwalled and in certain parts, one could walk across at low tide. In the 17th century, parts of the river were reclaimed and the walls went up. The marathon crosses to the northside on the James Joyce Bridge, which appeared in 1998. It is one of two Liffey bridges designed by Spaniard Santiago Calatrava – the other is the Samuel Beckett Bridge, which is closer to the docklands.

This crossing transports you to Stoneybatter. The area is lower rise and charming in many parts, and has witnessed successive invasions by hipsters. It gets roomier as you veer left onto Aughrim Street and on towards the North Circular Road, which was the M50 of its day.

Runners will then enter the Phoenix Park through gracious, white, iron gates. Garda headquarters sit to the right and the perimeter of Dublin Zoo on the left. Runners are subject to the by-laws of the Phoenix Park Act 1925. So once they don’t rent anyone a chair, fish or play pitch and toss, they’ll be fine.

The route zig zags onto Chesterfield Avenue, the main road through the park. It’s a long stretch and it requires a little endurance, so allow me to digress. Aside from military drills, the Phoenix Park was quite neglected until architect Decimus Burton was engaged to put manners on it. Entrances and gate lodges were built, there was planting and the central avenue was imposed. It was then given over to the Office of Public Works in 1860. Our presidential home, Áras an Uachtaráin can be seen through a gap in the trees to the right, and the park’s famous deer like to hang out in the copses around here.

The marathon exits the park and proceeds towards Castleknock before kicking back towards town. There is a nice rural outlook to the right, courtesy of Castleknock College. The race re-enters the Phoenix Park, proceeds along the southern flank and exits again.

The route then crosses the bridge into Chapelizod village. Typically, six bus routes go from here to the finish line. But not today. Today it is about the people on the 10-toe turbo express.

The route out of Chapelizod features an uphill with ramps on St Laurence Road. The runners then head towards Inchicore and pass Kilmainham Gaol, which was operational as a prison from 1796 to 1924. The big gateway ahead is the entrance to the Irish Museum of Modern Art, previously the Royal Hospital Kilmainham. Fifty works by Lucien Freud are on view until 2021. No pressure on the contestants to pop in and visit, though.

They continue on then, reaching South Circular Road (or the South Squareuelar, as it should be called). If you are leading the race at this stage, remember to turn right when you come to Dolphin’s Barn. This takes you to Crumlin Road – the halfway point.

The population of Dublin has been rising since records began. Much of Crumlin appeared in the 1930s and 1940s to accommodate this increase. Crumlin continued the Garden City ideal that began in Marino. This plan envisaged residents having room to grow vegetables in the back garden and flowers in the front. Exteriors in Fair City were filmed around Crumlin before a set was built in RTÉ HQ at Montrose.

At the whopper roundabout, take the first exit, which brings you to Walkinstown, where the air is clear. Keep her lit until the Top garage at the Kimmage-Crumlin Crossroads. Ever wonder where the KCR is? Run the Dublin marathon and you will find out.

In due course, the race reaches Templeogue and Terenure. The area became increasingly populous in the 1980s and An Post sought to introduce a new post code. They had first begun to use postcodes 20 years previously, starting with nine districts. The suggestion was to redesignate parts of Dublin 6 to Dublin 26. Some locals objected and Dublin 6W was born.

Follow the yellow brick road and you will come to Terenure village, with its constituent rise in boutiques and estate agents. It’s a curious mix of housing. Some of the redbricks are chic family homes. Others are in flats.

Continuing on through Rathgar you pass Orwell Park, a picture-perfect street of redbricks. No 56 was listed for sale in September, guiding at €2.3m. The green eaves at the T-junction belong to Tramway House, which was once the end point of the tram to College Green. Which is one method of getting to Milltown, the other being to run it – which the competitors will do, heading on towards Clonskeagh.

Clonskeagh is one of the few areas in Dublin to retain areas of undeveloped land. Along the marathon route, the Roebuck Road stretch features the city’s Islamic Cultural Centre. This is headed by Sheikh Hussein Halawa, father of Ibrahim, who was released from prison in Egypt last week and returned to Ireland on Tuesday. No 95 Roebuck Road is a Sylvanian cottage on the market at €475,000.

Further ahead, there is an incline, fondly – or otherwise – known as Roebuck Mountain. This rounds onto Fosters Avenue, a long descent which will give the runners a slight reprieve. Upon reaching the N11, it is a direct route to the finish line. The route turns right down Nutley Lane and passes the entrance to RTÉ.

The station has just sold half its 18-acre campus for development. RTÉ was launched by Éamon de Valera on New Year’s Eve, 1961. After some encouraging words, he stated that television policy “can build up the character of a whole people, inducing sturdiness and vigour and confidence. On the other hand, it can lead through demoralisation to decadence and dissolution.” Party on!

With Dev’s words ringing in your ears, you reach the Merrion Road and Dublin’s embassy belt. Ailesbury Road and Shrewsbury Road – Monopoly’s priciest streets – intersect with this road.

AIB headquarters is the expansive building to the right and the Royal Dublin Society is the equally expansive building to the left. The RDS is involved with arts, agriculture, business, equestrianism and science. Membership is €380 annually for residents of Dublin, Meath, Wicklow and Kildare and is cheaper for members outside this area, overseas members, students and young adults.

Cross the Dodder river for the second and last time. The US embassy appears on the left. It is a circular concrete building on a triangular site. The 1964 edifice was designed by American John M Johansen and Irish architect Michael Scott.

Move on to Northumberland Road – a long stretch of Victorian redbrick terraces and semi-Ds. One of the bloodiest battles of the 1916 Rising happened along this stretch. A small number of Irish rebels occupied three buildings to ward off the British reinforcements which were arriving in Dún Laoghaire. While the British were ill-equipped, the rebels ran out of ammunition and were eventually overcome. There were fatalities on all sides and more than 200 people were injured.

The Grand Canal lies ahead, stomping ground of Leaving Certificate poet Patrick Kavanagh. Apparently Kavanagh met Brendan Behan along the canal one day and they agreed to go for a drink. They brainstormed pubs – however, one or other was barred from each pub suggested so they bid each other farewell. This waterway inspired Kavanagh’s lines:

Leafy-with-love banks and the green waters of the canal
Pouring redemption for me, that I do
The will of God, wallow in the habitual, the banal.

Most competitors would bite your hand off for a cooling dip in the canal at this stage. Not much of the route remains. The buildings on Mount Street Lower are mainly architectural “infill” – that is, they replaced previous buildings. The passport office has moved to one such building. It issued nearly 750,000 passports last year – a 9 per cent rise on the year before.

Then it’s back to Georgian Dublin. Merrion Square was set out by architect John Ens- Oh, who cares . . . it’s the finish line.