The botched assassination attempt of the hated French 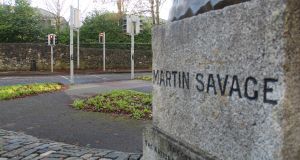 Memorial at Ashtown, Co Dublin, to volunteer Martin Savage, who died during the failed assassination attempt 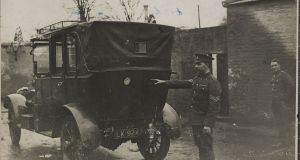 On the night of December 18th, 1919, a group of IRA men met at the Sinn Féin Club on North Summer Street, Dublin. The fire was roaring. There was much to discuss. There had been a marked escalation in activities by the IRA (so called from August 1919) in the late months of the year and a subsequent repression by the British authorities.

At about 9pm, Paddy Sharkey, a member of the 2nd battalion of the Dublin Volunteers, told the others he was leaving. “What’s your hurry? Have you a date on or what?” inquired Vincent (Vinny) Byrne, a member of Michael Collins’s so-called Squad.

Sharkey told him he had to get his father’s basket – lunch provision – ready for an early start. His father worked as a guard on the railways. He was on his way down to Roscommon “to bring ould French back to Dublin tomorrow morning”.

“Is that so?” Byrne said. The man in question was Lord John French, the lord lieutenant and viceroy in Ireland. French, a hate figure in republican circles, became lord lieutenant in May 1918 and interpreted his role as being at the head of a quasi-military government.

He was one of the prime champions of the disastrous decision to introduce conscription in Ireland and he advocated the use of military oppression to bring it about.

In May 1918 the Sinn Féin leadership was arrested as part of the so-called German plot on a trumped-up premise that the party was colluding with Germany in the latter stages of the war.

In September 1919 the Irish administration banned the Dáil and proscribed a large slew of nationalist organisations, including Sinn Féin, the Gaelic League, Cumann na mBan and others. It was reported in republican circles around Armistice Day 1919 that French had addressed loyalist boy scouts and called Sinn Féin and its supporters “vermin” to be eliminated.

His actions made him a prime target for republicans, but he proved to be a maddeningly elusive quarry.

The veteran of many colonial campaigns and the first World War was a wily figure. He rarely ventured out, and when he did, he frequently changed his route at the last moment. A group of would-be assassins assembled at Grattan Bridge on one occasion with grenades primed, but they were rumbled by a spy and had to call it off. On another occasion the IRA planned to shoot French during the Armistice Day parade in 1919, but called it off fearing civilian casualties. Another plan to shoot French in the Vice-Lodge (now Áras an Uachtaráin) was dismissed as a suicide mission.

Now, thanks to a fortuitous tip-off, there would be another opportunity to assassinate the head of the British government in Ireland. Byrne raced to the home of Mick McDonnell, the head of Collins’s Squad, with the news. “That’s the best bit of news I’ve heard for a long time,” McDonnell said, and he worked through the night to assemble a team for the assassination attempt.

Eleven men cycled from the North Circular Road to Ashtown Cross the following morning. Among them were the veterans of Soloheadbeg, Seamus Robinson, Dan Breen, Seán Treacy and Seán Hogan.

One hundred years ago Ashtown was countryside on the fringes of Dublin. There was only one building of note, Kelly’s pub, which stands where the Halfway House pub is now. The would-be assassins entered the pub, ordered some soft drinks and made chit-chat with the locals. “We talked about cattle and markets and grazing, though some of our men knew very little about markets or livestock,” Breen recalled in his book My Fight for Irish Freedom.

The train was due to arrive in Ashtown Station at about 11.40am. This isolated station was for the benefit of the viceroy and his staff. The assassination attempt was a frenetic affair. A couple of volunteers spied a large cart in the vicinity of the pub and tried to drag it into the middle of the road to slow down the expected convoy. A policeman, who told them to desist as “his Excellency” was on his way, was hit over the head by an unprimed grenade and knocked unconscious.

Moments later French arrived at Ashtown station. As his convoy approached, the volunteers crouched behind a hedge, weapons at the ready. After the dispatch rider passed, they opened fire on the first car, but assumed that French was travelling in the second one, as he usually did. A grenade was thrown at it, but it bounced and exploded on the road.

Marksmen in the third car returned fire. In the ensuing gun battle, Breen was shot through the leg and volunteer Martin Savage, a 21-year-old shop attendant from Co Sligo, was killed when a bullet entered his neck.

Savage, despite his tender years, was both a veteran of the Easter Rising and the internments that followed it.

“How light-heartedly he had been singing and reciting poems about Ireland and the glory of dying for one’s country as we rode out to Ashtown only one hour ago,” Breen remembered. “Now he was breathing his last, meeting his death as he would have wished from a British bullet.”

Breen was mad that they had missed French, but Treacy was more philosophical. “We can’t have a Knocklong every day,” he said. The men involved cycled frantically back into Dublin to elude the British army presence. Robinson lost the pedal on his bicycle and got on the back of Treacy’s bicycle. Robinson’s weight pressed down on the mudguard, so they commandeered a new bicycle at gunpoint from a retired RIC officer and promised the unfortunate owner they would leave it in a certain place for him to collect.

The assassination attempt had failed. It transpired French had been travelling in the first car, which sped away quickly from the scene.

The aftermath demonstrated there were still powerful forces in Irish nationalist society that were not sympathetic to the IRA at that stage of the war. The Pro-Cathedral refused to allow Savage’s body to repose there; his parish church in St Laurence’s in Grangegorman also refused to take the remains. Savage’s funeral eventually took place in his home town of Ballisodare. Thousands attended.

The press was also hostile. “The Irish public will congratulate the lord lieutenant upon his escape and the country will congratulate itself that it, too, has escaped an irredeemable misfortunate,” the Freeman’s Journal stated.

The Irish Times expressed similar sentiments: “The first thought of all decent Irishmen must be for their great compatriot whom God’s mercy has saved from the assassin’s hand.”

The IRA could discount the musings of The Irish Times, which at the time was pro-British. No such latitude would be allowed for the nationalist-leaning Irish Independent. The paper’s editorial on the day following the attack was unequivocal. The attack was a “criminal folly” and an “outrage”. Savage had been a “murderer”.

This enraged the IRA, and the normally cautious general headquarters (GHQ) ordered an attack on the newspaper. Fifteen men with sledgehammers, crowbars and heavy wrenches entered the paper’s premises and smashed up the machine room. One volunteer, Bill Judge, held the editor, TP Harrington, at gunpoint and threatened to shoot him. When Harrington asked why the gunman was not wearing a mask, Judge responded: “When I leave here I will forget your face, and if you are wise you will forget mine.”

The response of British prime minister David Lloyd George to the shooting was shockingly insouciant, according to the chief secretary for Ireland at the time, Ian MacPherson, who also feared he would be assassinated.

“There was no expression of regret for my friend, nor was there expression of sympathy for us both in our difficult task. He simply said, ‘They are bad shots’.”

Three days later Lloyd George stood up in the House of Commons to introduce the latest attempt by the British government to settle Irish matters once and for all. Ireland, he said in the exasperated tone he used when discussing all things Irish, had never been so well off thanks to the benevolent British taxpayer, yet never so estranged from British rule.

He proposed two home rule parliaments, one for the 26 counties and another for the remaining six and a Council of Ireland composed of members from both assemblies. If the Irish wanted unity, the British government would not stand in the way, he told MPs.

Then, in one of his first broadsides aimed directly at Sinn Féin, he warned that “any attempt at secession will be fought with the same determination, with the same resources, with the same resolve as the northern states of America put into the fight against the southern states. It is important that that should be known, not merely throughout the world, but in Ireland itself”.

Within two years Lloyd George signed a treaty with the same Sinn Féiners that allowed for the eventual secession of the Irish Free State from the United Kingdom.