Deaf ears: The archbishop who blocked a children’s hospital 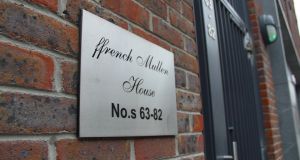 A block of flats in Charlemont Street is named after Madeleine Ffrench-Mullen, the partner of Dr Kathleen Lynn, and the co-founder of St Ultan’s Hospital. Photograph: Ronan McGreevy

Dr Kathleen Lynn helped to found St Ultan’s Hospital for Sick Infants (Teach Ultain) in 1919, a female-run institution focusing on children’s healthcare at a time when paediatrics was a fledgling profession. In 1935, funds and a site were made available to establish a national children’s hospital in Dublin by amalgamating facilities at St Ultan’s and Harcourt Street. However, the plan was vetoed by Archbishop of Dublin Edward Byrne. The following extract from A Bitter Pill, in Martina Devlin’s story short story collection Truth & Dare: Short Stories about Women Who Shaped Ireland, imagines an encounter between Dr Lynn and the archbishop as she attempts to change his mind.

Kathleen takes the initiative. “As you no doubt know, your grace, the tenements are riddled with poverty and disease. One in ten children in Dublin is doomed to die before its first birthday. Some from malnutrition, others from illnesses that are entirely preventable. Our new hospital would give these children a chance to grow up strong and healthy. They are the nation’s future.”

“The tenements are a blot on the city but a government housing programme is under way,” says the Archbishop. “Progress is being made. The Catholic Church fully supports any initiative to move families out of the slums. We, too, are engaged in the construction business – our focus is on building churches for these new communities to ensure their spiritual wellbeing is met. To keep the lamp of faith burning.”

“Hospitals are needed, too, surely?”

He gives her a sidling look. “Provided they are run according to the Catholic ethos. What use is a strong, healthy child if it is wooed away from its faith? Far better for a Catholic child to die in the cradle than to grow up lost to Mother Church.”

Kathleen keeps her face shuttered, taking her time about answering. Her nostrils dilate, and she inhales the scent of furniture polish and old books, calling to mind her father’s study. Her eyes drift to the window, through which she can see a skeletal chestnut tree where some blackbirds are clustered. Springtime is some months away but it’s biding its time. Progress cannot be halted. Leaves will bud on the chestnut’s branches, birds will nest there.

She tries to strike a conversational tone.

“Come, now, your grace. Is your religion planted so thinly that you expect patients and their families to convert as soon as they set foot in a non-Catholic hospital?”

He bridles and she realises she has erred.

“The people are poor,” he says. “They may be prevailed upon. We do not forget how they were offered food by your co-religionists if they abandoned the faith of their fathers during the Famine.”

So, battle lines are drawn. Kathleen swallows, at a loss about how to make him understand that her only interest lies in curing their bodies. It feels as if all the air has been sucked out of this stuffy room. She glances toward the window – if only she could ask him to open it. Just then, a flicker of movement catches her eye. A bird has left the safety of the chestnut tree and is swooping directly towards them. Blinded by a shaft of sunlight, it thuds against the glass.

Simultaneously, they rise to their feet and walk to the window. The bird is lying on the gravel outside.

“I’ll send someone out to see if anything can be done for the poor creature,” says the archbishop. “It may simply be winded.”

“Its neck is broken,” Kathleen raps out. “Burial is the only thing that can be done for it.” She turns towards him. Until now, there has been a piece of furniture between them but at this moment only the space of a hand separates the two.

“I cannot stress enough, your grace, that the merger is not my idea. I have no ulterior motive. The proposal comes from the Hospitals’ Commission. They’re the ones suggesting St Ultan’s and Harcourt Street children’s hospital should combine resources.” Unable to resist a sly reminder of who he’s dealing with, she adds a sprinkle of Latin. “And, mirabile dictu, the money is available to make it happen. Do, please, reconsider. We need your support.”

The archbishop returns to his seat, one of his legs dragging fractionally. Something in the way he carries himself, some act of willpower that shivers the air as he parts it, reveals a human being in pain to Kathleen. However, as she sits back opposite him, no trace of discomfort is visible on his face. She considers suggesting that he might ring for a glass of water – surely he must have some medication he can take? Or she may have suitable pills in her bag, depending on the nature of the pain. On the point of offering help, she catches his eye. At once, she understands it would be treated as a violation of his privacy. She is not meant to detect his struggle.

His tone is firm, as if to compensate for a momentary weakness. “This hospital you envisage is impossible, Miss Lynn. It would create a monopoly on the southside of the city. Ninety-nine per cent of the patients would be Catholic but you are a non-Catholic institution. I could not possibly cede control to a body whose attitude to the Catholic viewpoint is suspect, in my opinion – if not downright hostile.”

“Dr Byrne, I must protest. That assessment is unjust. After all, St Ultan’s matron and most of our nurses are Roman Catholics. ”

“Ah, but I understand the majority of your doctors are Protestants.”

Temper flares in Kathleen – as much at her own slip, which gave him an opportunity to pounce on it. Unguarded, she exclaims, “In all conscience, your grace, how can you refuse a new hospital?”