‘As Shane MacGowan almost said: Would everyone please calm down?’ 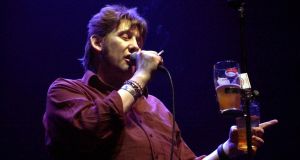 Shane MacGowan and the Popes at the Olympia Theatre, Dublin, 2003. Photograph: Haydn West/PA

Let’s try an experiment. I’ll write a piece suggesting I’m sick of looking at beards. There was a time when only sailors, mountaineers and Rolf Harris left their face fully carpeted. Our cities’ gentrified districts now groan with bespoke milliners who, from the nose to the neck, could pass for Brian Blessed. I’ve got no real reason to be annoyed by this. So what? I’d like to see an end to all beards anyway.

How long would it take for tabloids, phone-in shows and social media to suggest that “The Irish Times wants to ban beards”. What next? If this goes on the PC Brigade (in which I hold the rank of second lieutenant) will be bursting into our homes and yanking nose hair from our blameless orifices.

Okay, that probably wouldn’t happen. Nobody pays any attention to me. But, as recent weeks have confirmed, it takes only the mildest complaint for aggrieved maniacs to start brandishing the B-word.

Let’s not get too deep into the rights and wrongs of broadcasting Fairytale of New York uncensored. A recent statement from Shane MacGowan – the key message of which was: “Calm down, everybody!” – addressed the annual controversy concerning that gay slur with great reasonableness. Think what you like.

Words matter, and as our understanding of social justice evolves, our language evolves along with it. Here’s how to remove speciesism from your daily conversations. pic.twitter.com/o67EbBA7H4

Think also what you wish about the controversy concerning the ancient duet Baby, It’s Cold Outside. This is a trickier one. In recent years, some commentators have wondered if the lyrics are a little dubious. “Say, what’s in this drink?” the woman warbles as she tries to escape the attention of her male partner (or assailant). Ha ha! He’s drugged her cocktail. Those crazy crooners.

Then there was that extraordinary tweet from People for the Ethical Treatment of Animals. Nobody is yet sure if Peta wasn’t working a massive troll here. If so, it partially worked. The campaigning body’s name was suddenly everywhere on social media. Unfortunately, almost every comment was seasoned with ridicule. The tweet argued that people should stop using idioms that contain references to violence against animals. So “kill two birds with one stone” might give way to “feed two birds with one scone.” You might think about saying “bring home the bagels” rather than “bring home the bacon.” Okay, let’s not beat around the badger (I know that’s not a thing, but nor is Peta’s suggested “take the flower by the thorns” for “take the bull by the horns.”) This is just plain idiotic – not least because it’s a bad idea to feed cake or bread to birds. On that one we fail to be neutral.

If we let the millennial brats have their way, we’ll soon be risking arrest if we don’t refer to Personchester or African American Friday

Following news stories on each of these cases, the airwaves were alive with weepy suggestions that somebody, somewhere was trying to “ban” something. There are no snowflakes like the snowflakes who go on endlessly about other people being snowflakes. You couldn’t move for polls wondering disingenuously whether Fairytale of New York should be banned. Radio stations debated Peta’s call to “ban” phrases like those listed above. Others wept for the generation who fought wars so their great-grandchildren would have the freedom to “ban” Baby, It’s Cold Outside.

The conclusion was always the same. If we let the millennial brats have their way, we’ll soon be risking arrest if we don’t refer to that Lancashire city as Personchester or that shopping fiesta as African American Friday. Just you wait.

As Shane MacGowan almost said, would everybody calm down? Nobody is trying to ban anything. Every year there is some discussion as to whether that word in Fairytale of New York should be bleeped or whether the song should be left off certain playlists. Every year, somebody (though not MacGowan) dishonestly argues that “it actually means ‘lazy person’, you know?” Even if one radio station does decide not to play it, the tune will remain available on a dozen streaming sites. Nobody is banning Baby, It’s Cold Outside. A few American radio stations merely raised objections to the lyrics. Peta made no effort to prohibit you saying “flog a dead horse” (why would the horse care any more?) by legally enforceable diktat. It’s just an idle suggestion from a social-media drone with too much time on his hands.

It’s fitting that the conversation should arise at this time of year. ’Tis the season for gammon-headed loons to object to the “banning” of Christmas. According to Donald Trump, it has only become safe to say “Merry Christmas” again since he entered the Oval Office. They’re tearing down trees on Main Street. They’ve got Rudolph’s head on a stick. They’re rounding up elves and setting them to work in the tofu farms. They’ve arrested Santa just for wearing a beard. I saw it coming. The Irish Times called for just such a ban last week.

Would everybody please calm down?