Artists given briefing document with suggested answers to questions from public 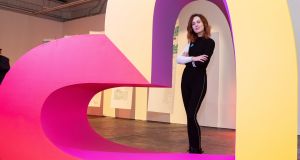 Photographer Julia Monard pictured with the new Galway 2020 logo at the ‘Get Involved’ event in the Printworks, Market Street, Galway. Photograph: Andrew Downes

Galway’s European Capital of Culture project has initiated a “rebranding” exercise to restore confidence in the controversial project.

A new logo representing a “new bolder and more vibrant” Galway “2.020” and a “vibrant new colour palette... inspired by the landscape” was unveiled at an “engagement event” on Thursday evening.

The event attended by Government chief whip and Minister for the Gaeltacht Sean Kyne and deputy mayor of Galway Donal Lyons (Ind) also marked the opening of a two-day exhibition on the project.

However, some Galway artists and writers have reacted with dismay to the continued delay in finding a new creative director since original appointee Chris Baldwin resigned last May.

Poet Mary O’Malley who is a member of Aosdána said a “re-branding exercise is a PR exercise, usually, and it generally costs a lot of money” and asked “how much public money did it cost to put a dot in 2020?”

Artists involved in the Galway 2020 programme who were asked to support the exhibition have also reacted with shock to a briefing document given to them on Thursday with suggested answers to questions they might be asked by members of the public.

The briefing document seen by The Irish Times defines the project’s “personality” as brave, creative, fun, open, proud and vibrant”, with a tone that is “confident, energetic, friendly, inspiring”.

It also gives suggested answers to questions on the event, on the exhibition, and on the “lack of a creative leadership” and “lack of progress regarding business engagement” and the impact of budget cuts on arts projects.

The suggested answer on the lack of creative leadership is that “we are working collaboratively with the team at Galway 2020 to bring my/our project (s) to life and develop a really exciting programme for our European Capital of Culture designation”.

“I/we are delighted to be part of this event which gives us the opportunity to give the public a taste of what’s to come from our Galway 2020 programme and our projects,” the suggested answer concludes.

Artists who preferred not to be named said they were “stunned” by the tone of the document.

Galway 2020 chief executive Patricia Philbin said that the briefing document was giving “general bullet points” to the cultural partners, and the project was “not prescribing answers”.

“It is entirely up to them as how they respond,”she said.

Ms Philbin expressed confidence that Galway could produce a “world class programme”, and was “working tirelessly” on finding a new creative lead and anticipated an appointment in the “coming weeks”.

She also said that a sub-committee of the Galway 2020 board was working on business partnerships, and was still working towards its target of €7 million in sponsorship.

The overall budget for the project was €46 million, but the project recently indicated this may be cut to €39 million. No sponsorship was raised in the first half of this year.

Project representatives are due to travel to Brussels next week to update the EU monitoring group, which had warned during the summer that Galway was in “danger of losing track with the project and incurring further delays”, and identified the need to appoint a new cultural leader, among other issues.

Lady Gaga: Chromatica review – A star is reborn in this return to fully fledged pop
5

John Malkovich: ‘I don’t think anybody enjoys their family dying. I liked all mine’
Real news has value SUBSCRIBE