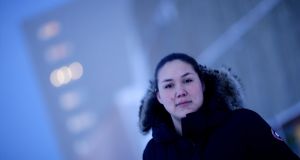 Niviaq Korneillson: glimpses of interesting wordplay in the native language

Irish fans of Danish TV dramas such as Borgen and The Killing will have encountered Greenland through the lens of Danish screenwriters eager to bring this relatively unknown country to a global audience. But what of native Greenlandic culture and literature? An article in the New Yorker last year noted a literary history barely a century old – the country’s first homegrown novel, Singnagtugaq by Mathias Stork, was published in 1915 – as it lauded the voice of a new novelist, Niviaq Korneillson.

Korneillson (27) is from Nuuk, Greenland’s capital city and home to 18,000 of its 56,000 inhabitants. She wrote her debut novel, Homo Sapienne, in 2014 after receiving a grant to sustain her for three months of writing. She procrastinated for two months and then completed the book in four weeks, according to the New Yorker interview.

Three years on, Virago have published it in English in a very uneven translation from Anna Halagar. It is easy to see the draw for an imprint like Virago – a young female voice charting the lives of queer characters in the rapidly changing society of a country whose backdrop is largely unexplored. Written with honesty and vim, Crimson, as it is now called, contains interesting subject matter on Greenland’s youth culture and the efforts of the current generation to escape – metaphorically and literally – from a country still haunted by its history despite being in the throes of modernisation. There is a distinctly Irish feel to its issues of colonisation, alcoholism, domestic abuse, and sexual misconduct by those in power in a government that has autonomy but is still within the Kingdom of Denmark.

Though lagging behind in Ireland in many respects – in Crimson, an MP can easily squash a story in the media and many in society are overtly homophobic – the country is as modern in others, having voted to legalise gay marriage in 2015, for example. Korneillson’s five characters are all modern Greenlanders in their early to mid-twenties. Fia, the book’s feisty first narrator, longs to be rid of her doting boyfriend Peter so she can get with Sara, a girl she meets at a party. That same party gets replayed over and over through the book’s other narrators: Fia’s brother Inuk, who castigates his sister for being gay before coming out himself; Inuk’s best friend Arnaq, a wholly unpleasant gay woman who lives to party; Iviq, a sympathetically rendered young transwoman; and finally, Sara, Fia’s love interest and formerly sexually frustrated girlfriend of Iviq.

The problem with Crimson lies not in the fact that all the characters are similar in age and aim – novels such as Sally Rooney’s Conversations with Friends or Belinda McKeon’s Tender show that stories about young people exploring gender and sexual politics can be powerfully effective – but with writing that constantly trips the reader up as we hope to delve further into the characters’ psyches.

For a book that replays the same party night from multiple perspectives, there is a marked lack of original detail in milieu or atmosphere. Music links the bookending narratives of star-crossed lovers Fia and Sara – “our song” Crimson and Clover, “giving us the perfect soundtrack” – but so too does a similarity in voice. They are virtually indistinguishable from each other, save for the fact that Sara’s sister has just given birth, related in clunky second-hand style: “Although this is the first time my sister sees her baby, I can tell she feels she has always known the child.”

All of the characters share Fia’s (or the author’s) tendency towards short, clipped sentences which are supposed to give a fragmented interiority. Instead they give mundane pronouncements on parties, hangovers, sex, identity and gender. Here’s Arnaq on the vibe: “Repetitive weekend. Walking in partying circles. Ready to go again.” By the time we get to her narrative, we know exactly how she feels. Her story – and that of Fia – suffers from the weight of narcissism, with little action or scene building to show that the characters care about each other despite the over-emoting in messages and emails throughout the book.

Crimson is rife with sentiment and cliché: “You look every inch a woman,” Fia tells Sara, before telling the reader, “we simply steal a glance at one another”. Meanwhile here’s Inuk on Arnaq: “She looks like an angel but she’s the devil personified. Trouble is, you can’t see her f***ing horns.” Elsewhere missions are accomplished, people make multiple beelines for others, while smelling rats and being left to hold the baby.

There are glimpses of interesting wordplay in the native language, character names in particular, and a glossary of Greenlandic terms included at the end, but such touches get lost in a book laden with plodding prose, inauthentic dialogue and virtually no space for the reader to consider the wider landscape of the characters or their country.

The New Yorker deemed it a book of “strikingly modern sensibility”. In its scope and subject matter, it has the potential to be just this. In its execution, sadly not.