Will Avengers: Endgame re-release propel it to an all-time box-office record?

A re-release with extra footage could take the Marvel film past the $2.788bn earned by Avatar 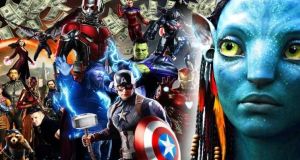 The battle for the top spot will be a close-run thing between Avengers: Endgame and Avatar

It seems as if Avengers: Endgame, which looked to have stalled just short of the all-time box office record, is on its way back into cinemas with some added footage.

Kevin Feige, president of Marvel studios, confirmed the information during a press junket for the upcoming Spider-Man: Far From Home. “Not an extended cut, but there will be a version going into theatres with a bit of a marketing push with a few new things at the end of the movie,” Feige told Screen Rant.

“If you stay and watch the movie, after the credits, there’ll be a deleted scene, a little tribute, and a few surprises.”

He offered further apparent confirmation to Comicbook.com. “We are doing that,” Feige told the website. “I don’t know if it’s been announced. And I don’t know how much ... Yeah, we’re doing it next weekend.”

The move – predicted in The Irish Times last week – seems likely to nudge Avengers: Endgame’s box office total past the $2.788 billion earned by Avatar since its release in 2009.

At time of writing, the Marvel film is only $45 million shy of that worldwide record. Most analysts felt the studio would wait a year before a strategic rerelease. Feige’s proposal seems to suggest that the film will be returning to cinemas before it has properly left.

The new version of Endgame could arrive in cinemas just a few days before the official launch of Spider-Man: Far From Home. That would allow fans to recharge their batteries before the next instalment in the Marvel sequence.

The all-time total is not, however, quite in the bag. Re-releases no longer make the sort of massive hauls the Star Wars films accrued in the 1990s. Avatar: Special Edition, released in 2010, accrued a worldwide total of $33.2 million.

A similar take for the revised Endgame would make the battle for the top spot a close-run thing.